The FED Will Hike in June, or Won’t? Pick Your Side – May 2016 Monthly Review - Forex News by FX Leaders

The FED Will Hike in June, or Won’t? Pick Your Side – May 2016 Monthly Review

This May, the US Dollar bulls have taken revenge on the bears as the Buck surged about 500 pips against most major currencies. We pointed out in the seasonal pattern article that this is a great month for the USD and it has proved so once more. After all, old habits die hard and that goes for the forex market as well. After touching the very low on the second day of May, the USD rose from its ashes again. The hawkish FED meeting minutes gave the bulls a helping hand and, whatever the reason, it worked well for us and we closed the month with a nice 526 pip profit. We’ll look into the Buck turnaround and other events in this article. 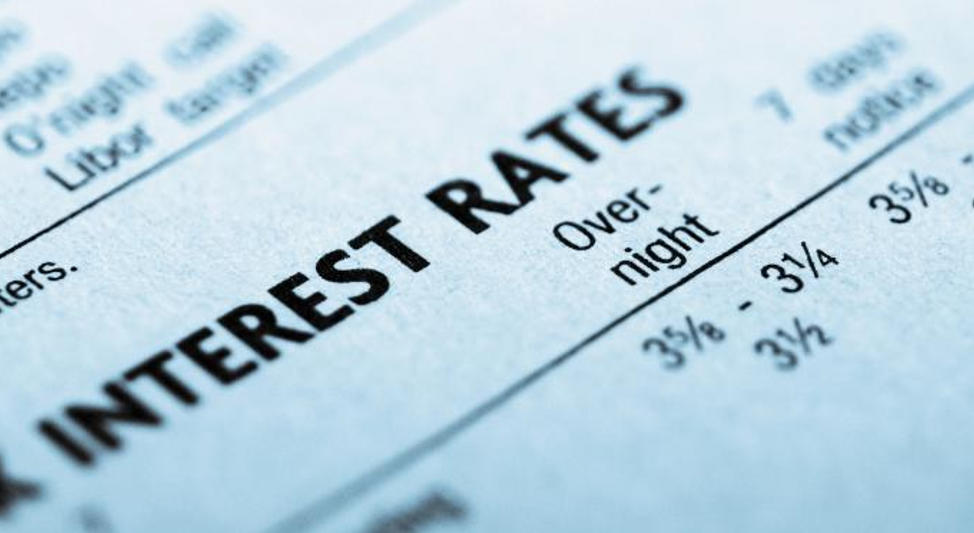 The market sentiment turned positive towards the US Dollar as it has done many times in the last 15 years during the month of May. As we mentioned, our forex strategy this month which you can find here was to buy the USD during the dips. That worked pretty well for us as the USD marched higher helped by the FED April meeting minutes. At the end of the month, we came out with 526 pips, which brings our total for this year so far to 1,628 pips, despite the small setback in February. This month we have issued 60 forex signals, three of which were long-term forex signals and the rest being short-term signals. 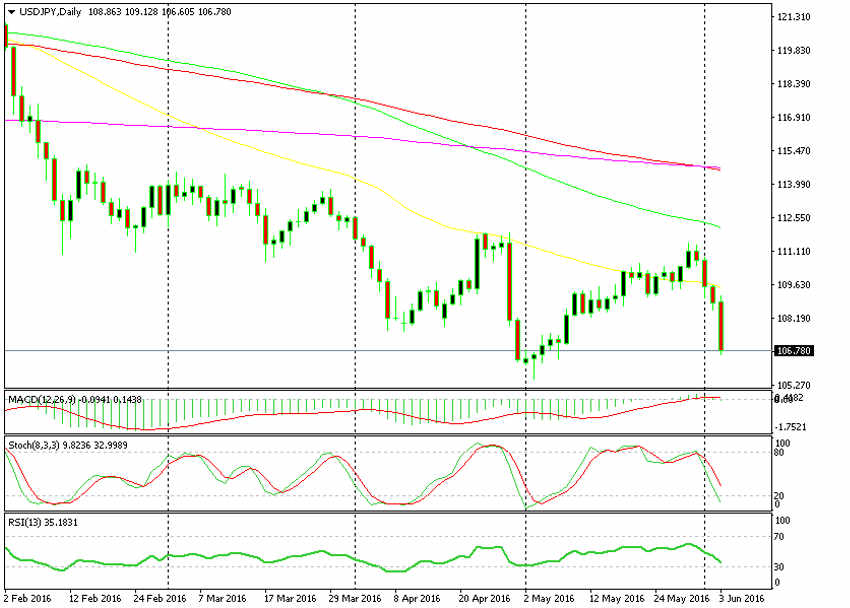 Our best performing pair was USD/JPY; we made 160 pips. The long-term buy forex signal that we opened last month at around 108 contributed the most to the performance this month since it brought us 119 pips. The trend in USD/JPY was up and clear cut, as you can see from the chart above. So it was a simple strategy to buy during the retraces. The second and third best performing pairs for our forex signals were USD/CAD and EUR/USD where we made 139 and 129 pips, respectively. The only losers for us were NZD/USD. We lost 52 pips and lost 23 pips in the GBP/USD pair. If you look at your forex charts, the pairs which were in a clear trend during May were the most profitable for us, while we had a harder time trading pairs with a choppy price action. GBP/USD, for example, kept oscillating after every Brexit poll was released, therefore, we tried to stay away from this pair. Anyway, we closed another successful month and hope we continue this way in the next.

The Market This Month

Hindsight is 20/20, and the FED suddenly turned dovish in March. They kept their dovish tone in their April meeting statement as well. So, we entered the month of May with a negative sentiment towards the US Dollar. The US Dollar index (USDX) touched a 16-month low with EUR/USD jumping above 1.16 and USD/JPY bottoming out at 1.0550s. But from experience, we know that the USD is a top performer during May. So, after EUR/USD failed to stay above 1.16 and reversed back down, it finished the second day of May below 1.15. This is a meaningful psychological level, as the monthly pattern looms in the minds of traders. Then things started to turn around slowly and the Dollar bulls became increasingly confident. They kept pushing the Buck higher and it broke some important support/resistance levels against other majors. 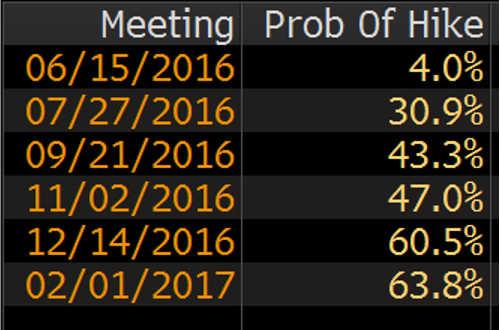 On May the 18th the FED released the minutes for their April meeting. As we said above, the April statement was sort of dovish but the minutes were surprisingly hawkish. The FED members made plenty of hawkish comments during their discussion and in the following days, some of these members became more vocal with live comments about the improvement of the US economy and multiple rate hikes this year. One of them even argued for four interest rate hikes this year, but I think that´s over the top because if they haven´t hiked the interest rates in four meetings how can they now? It would be nearly a hike in almost every meeting, which seems quite unrealistic. So, the USD kept marching higher as the US economic data kept posting better numbers and it did close the month near the highs. But, on Friday the things turned around again and the market sentiment turned sour again for the USD. The employment numbers came out mixed and (in my opinion)it leaned on the positive side. However, the market took it negatively and all the odds for a June rate hike by the FED vanished in a trace. Obviously, the USD declined and it lost more than 200 pips in only a couple of hours.

The most noticeable thing in May was the pickup in most of the US economic sectors that have been in trouble during the winter period. The wages have increased with the average hourly earnings beating the expectations almost every week. So, the unemployment has now fallen to 4.7% and this translates into higher wages. The factory orders, the durable goods orders, and retail sales have jumped up several times this month which means that the US consumer is starting to spend. The inflation has also picked up from the increase in demand for goods and services. The manufacturing sector still remains in a tough spot but usually that´s the last sector to catch up with the rest of economy because the demand for heavy machinery comes sometimes after the demand for more simple products. So, hopefully, the demand comes in this sector in a few months, which will push it into expansion again. Another thing to notice in May was the slight improvement of the Chinese economy and particularly the manufacturing sector. It´s not exactly flourishing but at least there are no worries about a possible crash anymore.

USD/JPY started the month near the lows after declining nearly 500 pips in the previous week. In the first two days of the week, it slipped even lower reaching 105.50s. But the sentiment turned around and the trend reversed. As you can see, this pair has been in an uptrend during the entire month of May. Each moving average (MA) on the H4 chart turned into support after being broken to the upside. Now the trend has reversed again but that only took place in the first three days of June. On the weekly chart, we can see that all the four weeks of May the candlesticks closed as bullish, but the first week of June closed as a very bearish candlestick. It´s among the 4-5 biggest bearish candlesticks in the last two years, but it doesn´t mean it will stretch further. Anyway, the respective central banks will decide concerning the fate of this pair. 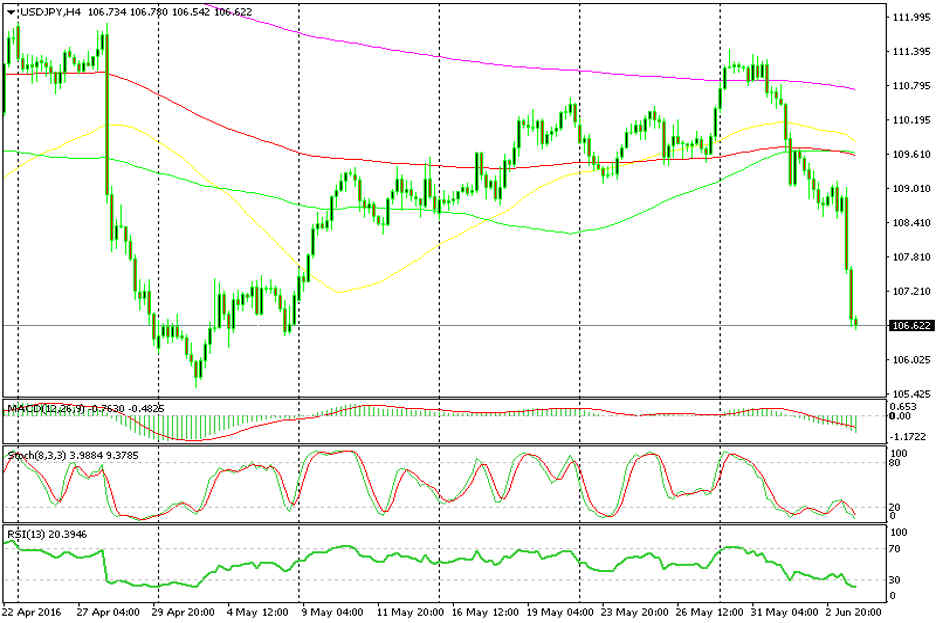 In May, the MAs have turned into support after being broken 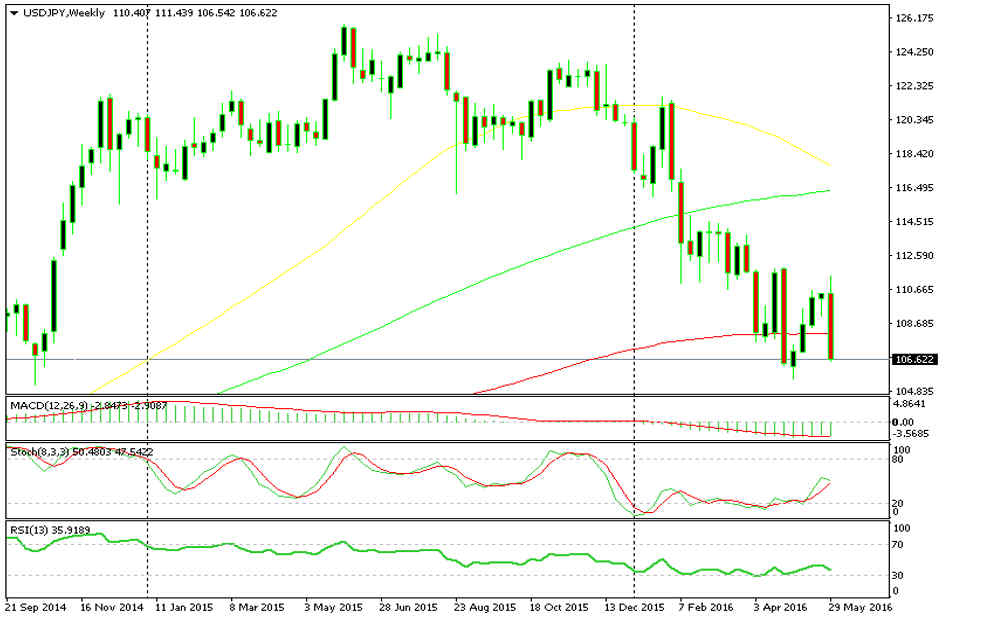 May had four bullish weekly candles but reversed in June

Similarly to USD/JPY, USD/CAD reached new lows on the second day of May but the trend immediately reversed and this pair ended up nearly 300 pips higher that same day. In the daily chart, we see that the 200 smooth MA in pink let go without much resistance during the uptrend this month. However, the 50 simple MA put up a fight during its first try on the sixth day of May. Then, after it was broken it turned into support and has held twice since then. The 100 smooth MA in red has now turned into the ultimate resistance at the top side. On the weekly chart, we see that the 100 simple MA in green has provided solid support in early May and the 50 MA in yellow has provided resistance. The CAD has diverted from the oil prices because they have increased but the CAD has declined during May. This is the reason we think that a dip in USD/CAD will be a good opportunity for a long-term buy forex signal. 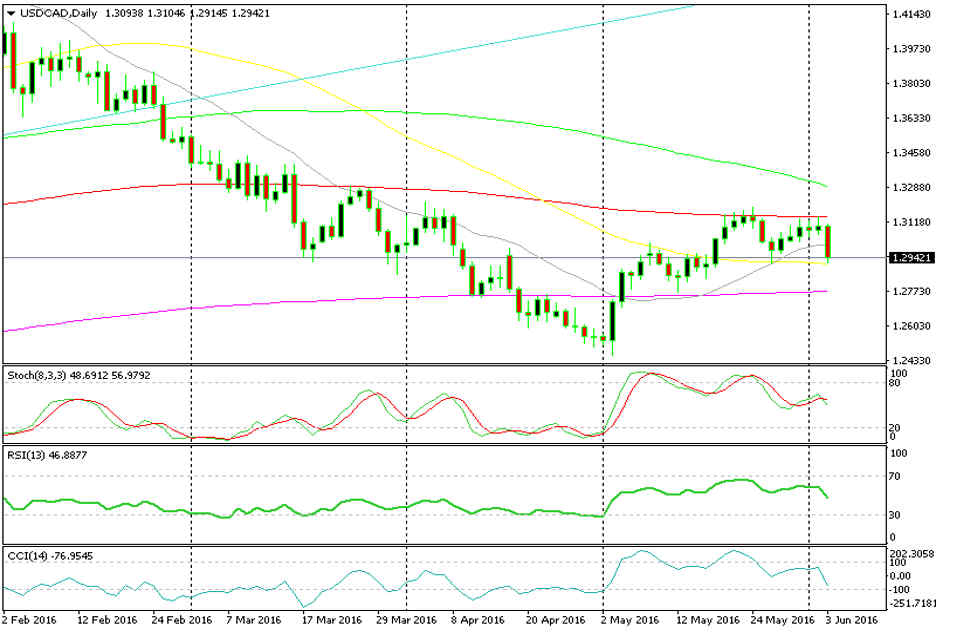 The downtrend of the first half of 2016 is finally over 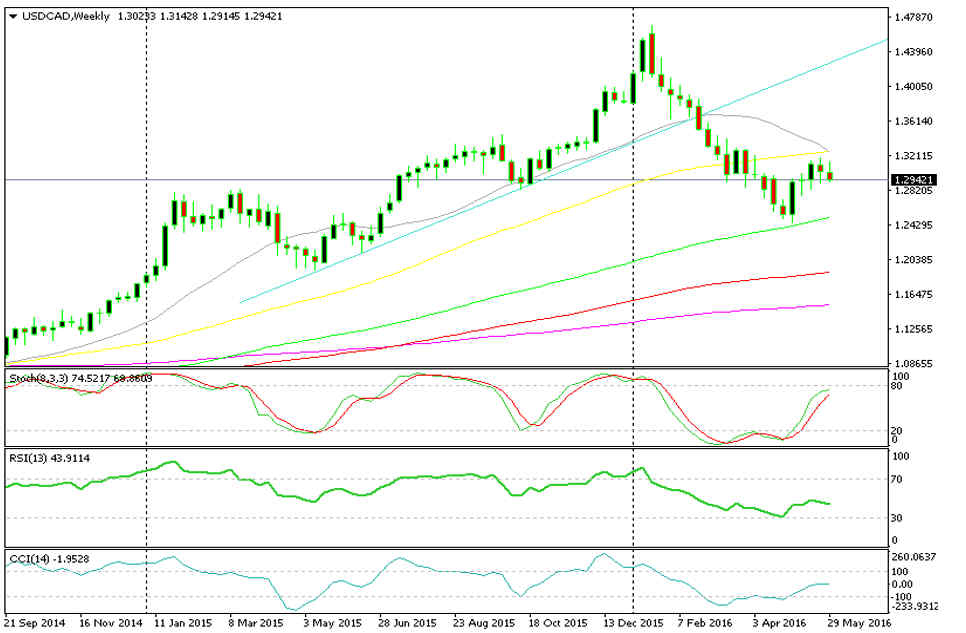 The month of May is over and we´re grateful to close in profit again. The US Dollar uptrend during this month had a positive impact on our forex signals performance. The FED meeting minutes were published this month and they helped the USD since they were pretty hawkish. The FED members asked for more positive economic data and we´ve had plenty of that since April. But, on the 3rd of June, the employment declined dramatically. That´s just an exception after years of solid employment figures, so personally I don´t think it will change anything. The market had a different opinion but anyway, we´ll see how the US economy will progress in June.

Check out our free forex signals
Follow the top economic events on FX Leaders economic calendar
Trade better, discover more Forex Trading Strategies
Related Articles
Lower US Employment Means Less Hikes From the FED
18 hours ago
Selling EUR/GBP Below the 20 SMA, Ahead of the BOE Meeting
EUR/GBP has been quite bearish recently, as the BOE has already has hiked interest rates many time and we decided to sell this pair again
3 days ago