This was a week full of action, or lack thereof I must say. But that´s the thing in forex… when the central banks disappoint the expectations – either by acting out of order or not – they can spark volatility and elevate the price action. The FED (Federal Reserve) didn´t hike the interest rates nor give the market any clues for a July or August rate hike – and this sent the US Dollar lower. The BOJ (Bank of Japan) was expected to do just the opposite and cut the interest rates further. However, they disappointed the traders as well and sent the Yen about 300 pips higher. We closed yet another week in profit with 63 pips. There was a tragic event this week as well,  which might affect the Brexit referendum, and will cover it in our discussion below. 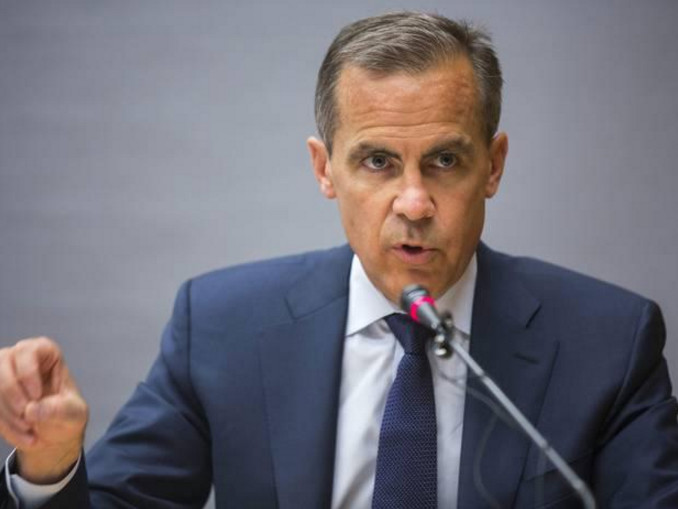 We opened this week with a sell forex signal on USD/CAD but the oil prices kept declining and this weighed on the CAD heavily, sending this pair even higher. So, while that signal got smoked we recuperated very quickly with our following three winning forex signals on Monday. Tuesday was very quiet as everyone was holding the breath for the FED meeting the next day – so our only profitable day was on Tuesday. On Wednesday, prior to the meeting the volatility was much higher; this might look strange to some people but that´s because the forex traders were closing their positions and adjusting themselves before the FED. There was some nice price action on Thursday as well, and we had eight forex signals on Wednesday and Thursday altogether. On Thursday, there was a massive political disturbance. British MP (Member of Parliament) Jo Cox, who was a pro-EU advocate, was murdered by a man who shouted “Britain First” before stabbing and shooting her. All sorts of assumptions were made, including a possible cancellation of the Brexit referendum or just a delay – this unease drove the Pound and the Euro haywire, sending them 200-300 pips up after they had fallen more than 100 pips on the same day. These events made it difficult to trade on Friday, so we cut the number of forex signals that day. We still had three forex signals that day and closed the week with a 63 pip profit. The number of forex signals we issued this week is 17 four of which hit stop loss and the rest were closed in profit. The win/loss ratio is right on  our long term average of 71/29%.

This week started with the spotlight on the FED. The US economy has really improved during spring after the slowdown in the winter and the global financial markets have stabilized, so the conditions are becoming more and more convenient for an interest rate hike by them. But the May employment numbers were disappointing and that puzzled the market coming into Wednesday's trading. However, the FED didn´t hike the interest rates despite the hawkish rhetoric we have seen as of late. This wasn´t a great surprise, but the forex traders (including me) were hoping to get some clues for a possible rate hike in July or August/September. Will they even hike the interest rates once this year, since promising four of them in December of last year?

Another surprise this week came from the BOJ. The forex market was hoping for further monetary easing, possibly a rate cut, or at least some hints for a future rate cut, which is the opposite of what was expected from the FED. But, as we now know they didn´t deliver. In fact, they even issued some hawkish comments, such as an improving Japanese economy. I really don´t understand where they see that. Was it the economy watchers sentiment which disappointed again or the machinery orders which declined by 11% last month? Anyway, that´s what happened and the JPY surged higher – with USD/JPY going through support at 105.50 and the 105 like a knife through butter, reaching 103.50s. After the murder of MP Jo Cox. The Euro and the GBP were quick to react surging 20 and 350 pips, respectively.

The economic data this week showed that the US (and particularly the UK economy) are doing relatively well despite Brexit caveats for the UK. The inflation numbers in the UK came out mixed on Tuesday but were still positive and the higher oil prices are still to be reflected. The unemployment rate fell to 5% from 5.1%, which translates into higher wages as the average earnings index showed when it beat the expectation by 0.3% for the first quarter. This was reinforced by the retail sales numbers – these beat the expectations as well and the previous figures were revised higher too, so all in all the British economy is doing quite well. We had some positive data from the US as well. The retail sales came out higher than expected on Tuesday despite last month´s huge jump and the import prices are picking up also, which will help the inflation. In fact, the next day the producer inflation numbers showed just that as they beat the expectations by 0.2%. The manufacturing indexes from a couple of US regions also improved this week, and hopefully the lagging industrial sector will pick up after a hard-fought economic recovery.

The BOJ failed to meet the market expectations this week. The market is losing faith on the BOJ,  thinking that Governor Kuroda is all talk but no action. When that happens there´s only one way for the JPY – up – which means USD/JPY will go down. That’s what it did this week, it broke the support at 105.50s and slipped smoothly below the 105 round number. It reached 103.50s but the 200 smooth MA on the weekly chart held on and the price retraced to 104.20s. On the monthly chart, the price is right at the 50 and 100 MAs. If it breaks below them then the first target is obviously 100, if it decides to move up then the previous support at 105.50s will turn into resistance. 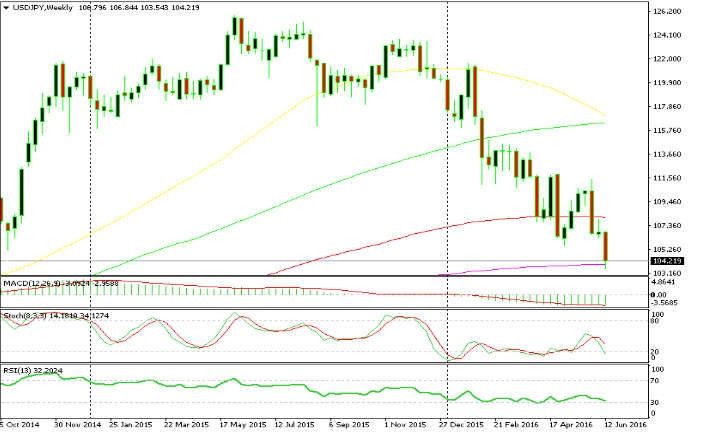 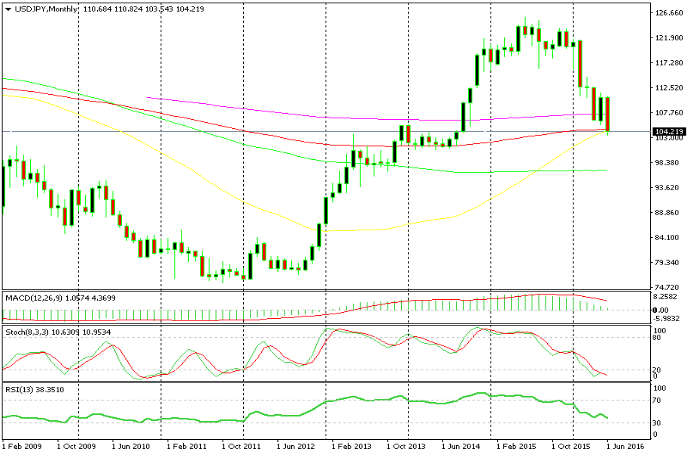 The sentiment for EUR/USD was negative this week and this pair kept declining despite the FED disappointment. It reached 1.1130 on Thursday, breaking below the 100 smooth MA on the daily chart. It has provided support recently, but that was it. The murder of the British MP had the market thinking that the Brexit referendum would at least be postponed and, thus, everything turned on its head. The British Pound was the first to capitalize on this but the Euro benefited too. EUR/USD reversed and closed near the highs but it still didn´t break above the 50 MA which has turned into resistance now. In the short term, the 100 and 50 MAs will be the ultimate targets. 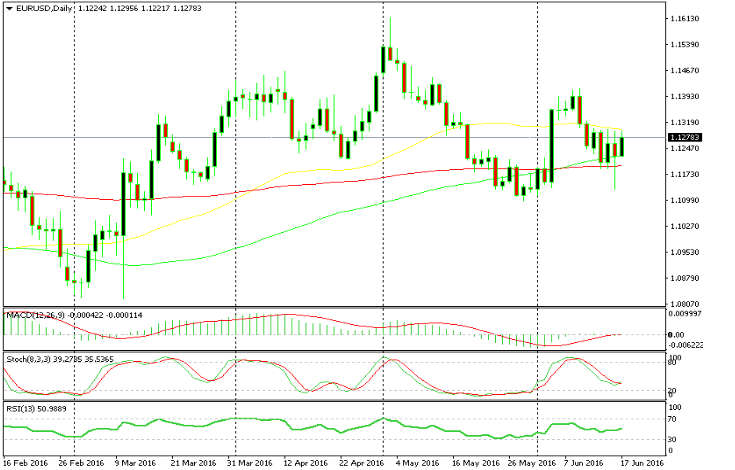 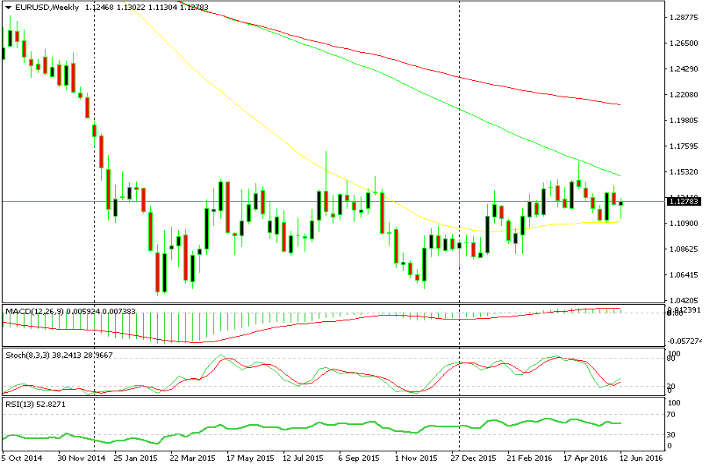 The 50 MA provided support as well this week

This wasn´t an easy week by all means, the FED remained dovish which disappointed the market expectations. The BOJ suddenly turned mildly hawkish despite a rubbish outlook on the Japanese economy. But the main thing this week was the murder of the MP and ‘remain in the EU’ advocate. The market thought, momentarily, that the Brexit referendum would be cancelled, however, the GBP and the Euro surged on through Thursday and Friday. We now know that the referendum will be held as scheduled, so we expect that next week will be mad, with all the Brexit polls coming out. We´ll try to be careful and, hopefully, close the week in profit, just as always.