Great Britain has voted to leave the European Union (EU), a result that few truly expected. While the Europeans are still reeling from the aftereffects, the talks between EU and the UK have commenced immediately. The somewhat unhappy marriage might be all over in less than a year. Anyway, no one can change the vote, but let´s look at it from our own perspective, as we made a very nice profit during this drama. We opened two long-term signals on Friday which helped us make 331 pips this week. 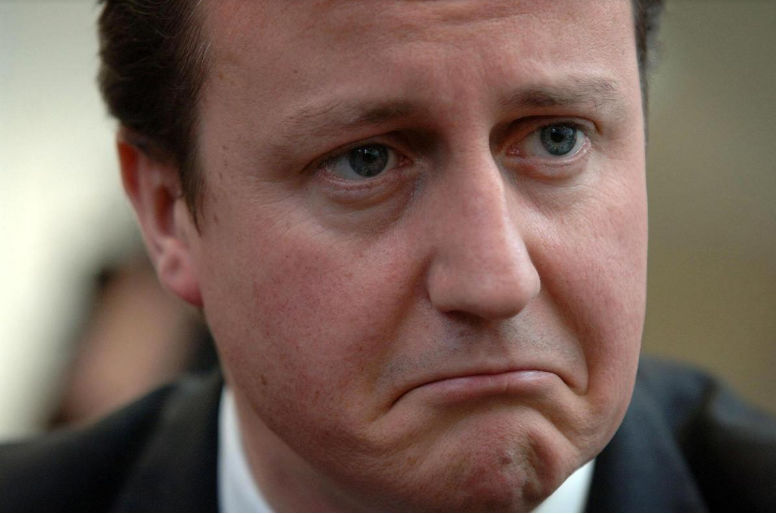 This has been a tough week because of the hourly polls being released… and we were doing ok until Thursday. This day, the market was uncontrollable, and it really made our trading difficult. I know that if you look at the charts right now it seems just like a normal day because of the huge moves that occurred in all pairs on Friday, but that wasn't the case.

The top-to-bottom range on Thursday had a 300 pip range. Then, Friday came… the British public voted to ‘Leave’ and everything hit the fan. The Pound fell crashed by 18 cents and dragged the Euro down with it. We had opened a long-term forex signal in EUR/USD just above 1.14 during the last push up, and our reason for this was that this level has been a strong resistance for more than a year – even if the Brits voted to stay in the EU (the consensus at the time), it wouldn´t have a great impact on EUR/USD because that was priced in already. So you can guess my surprise when I woke up at 5am in the morning to check what had happened.

No one expected Brexit to win so the moment I saw the chart… my heart dropped. I saw the news and got the confirmation that the forex signal might play out with EUR/USD sliding down. The 300 pip take profit was triggered after a few hours, so all I can say is there was some luck on our side, which is crucial in this game. The other long-term GBP/USD sell forex signal was easier because we opened it after the price retraced up after the initial decline. So, in total, we made 331 pips this week which is impressive, alongside a 59:41 win/loss ratio.

The moment of truth we have been expecting so long is finally here; it was quite unexpected because the polls showed that the Remain camp was ahead by quite some margin in the last few days, so everyone (including me) was not too worried.

When I woke up early on Friday morning to check out what was going on, I was gobsmacked to see GBP/USD had fallen nearly 20 cents while the Euro was some 500 pips lower and the Yen about 800 pips higher, and the USD/JPY pair below 99. At that moment, I realized that the worst had happened. The British people had fallen for all the false pretenses and nostalgia that Britain would become the global empire once again.

But, that´s our reality now and the first signs of what´s to come are becoming clear. The domino effect for the Eurozone is very real, the French and the Dutch far-right elite have already asked for similar referendums in their countries. Will the EU fall apart? It may not, but at least the expansion will be put on hold for now. What seems more real is the dissolution of the UK. Scotland and Northern Ireland clearly voted pro-EU so are keen to stay.

The political leaders of these regions already pledged for referendums of independence. The Scottish referendum of independence two years ago was a close call, so now that England and Wales have voted to leave EU I´m almost sure that Scotland and Northern Ireland will vote to leave the EU, meaning troubled times ahead for everyone. And that’s not all.

A petition calling for a second referendum has already collected about 150k firms, 50k more than needed to open a discussion in the parliament. Their point is at a low that requires that if the leave or remain vote was less than 60%, and the public turnout in the referendum was less than 75% – then a second referendum is required! I hope the British get cold feet with Scotland and N. Ireland threatening to leave the UK and hold another referendum, possibly coming to their senses in the second round.

The economic data was a bit light this week, not that it mattered anyway because all the attention was concentrated on the Brexit referendum. However, let´s take a quick look at few pieces of data that were released this week. On Tuesday and Wednesday, the FED chairwoman Yellen testified in front of the US congress and from the comments we realized that there was a miss in the employment numbers from the beginning of this month.

This wasn´t a big deal and the decline in the unemployment claims on Thursday reinforced this view. But, a disappointing thing was the negative durable and core durable orders on Friday. Regarding Europe, the German and the Eurozone economic sentiment picked up this month but that was before Brexit, now I reckon that the sentiment will drop to the floor.

The Brexit vote resulted in the Pound making one of the biggest daily moves in history. It fell from above 1.50 to 1.32 in a few hours, breaking all moving averages, historical support levels, and other technical indicators. It retraced back up to 1.39 but reversed back down again closing the week at 1.3630s.

The resistance level to watch on the daily chart is the 1.40 level which is a nice round number and has provided support before. On the monthly chart, we see that such moves have occurred only during the 2008 global financial crisis. The low at that time was 1.35 which is the ultimate support level. The price broke it on Friday but it pulled back up to close above it – so it doesn’t count as a real break until the week closes below it.

The first resistance in GBP/USD comes at 1.40 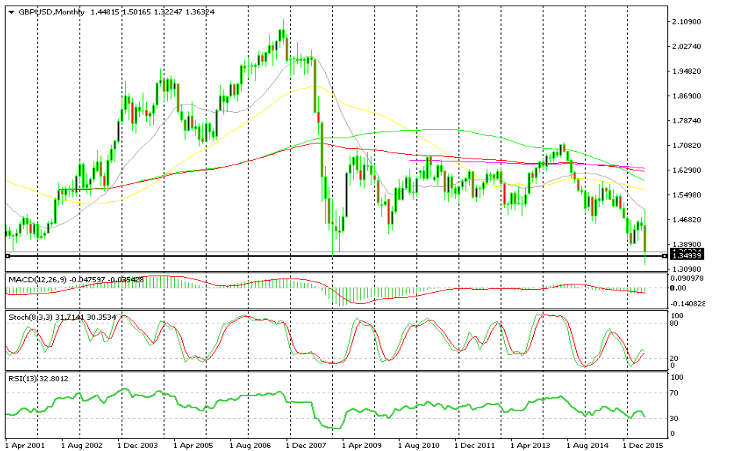 Brexit also heavily affected the Japanese Yen because the Yen is considered as a ‘safe haven currency’ and money flows into it during uncertain times. Even though the USD benefited from the risk-off sentiment, USD/JPY fell nearly 80 pips on Friday and, therefore, the Yen benefited even more. It broke the 200 MA on the weekly chart and moved below 100 as well but it retraced higher at the 102.25. On the monthly chart, we see the smooth 100 MA in red is now history and the price has already erased half of the gains from the 77 lows in 2012… so is this a change of direction in the trend? Will the BOJ intervene? It remains to be seen. 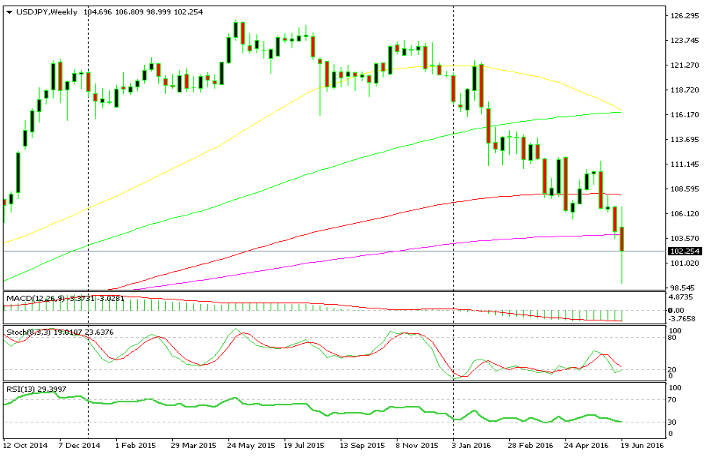 The 200 MA is already gone now 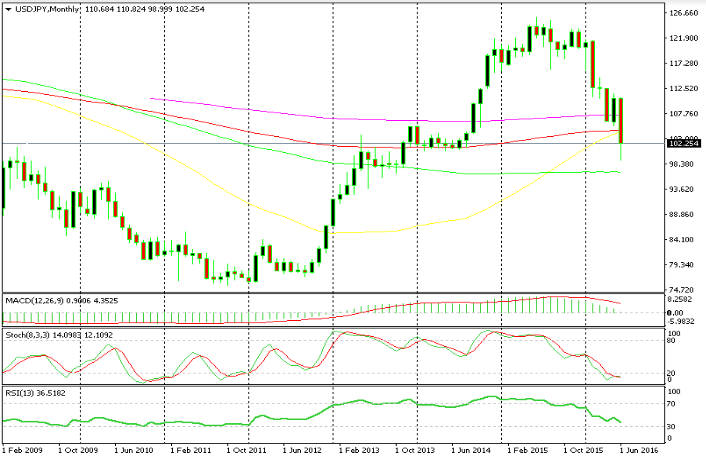 Has the trend changed for USD/JPY?

Ok, everything was laid out for us this week. The British people voted to leave the EU and that´s what will probably happen. The UK prime minister set himself up for what will likely be seen as the biggest failure in the history of British politics. But, other questions arise from this vote include: will this start a domino effect in the EU? Will Scotland and Northern Ireland leave the UK, because they voted Remain by a large margin? Very uncertain times were are experiencing… we´ll see what the next weeks and months will reveal.