As you may remember from last week, the BOJ (Bank of Japan) and the Japanese Prime Minister pledged to do whatever it takes to jumpstart the economy of Japan after decades of recession and weak growth at best. Ex-FED chief Bernanke was with them so, naturally, everyone instantly thought ‘helicopter money’. But Kuroda popped the bubble once again and left everyone feeling foolish when he denied it this Thursday.

But, the most important event this week was the unusual release of the British manufacturing and services data. It was the first data to cover a time period after the Brexit referendum… and it was terrible. If this is just the beginning, it´s not hard to guess which way the UK economy is headed. At least our micro-economy is going in the right way since we made a nice 185 pip profit from our forex signals.

Too bad Brexiters are losing control on their economy

We had a slow but steady week, apart from Monday when we gave 15 pips to the market we closed every other day in good profit. Last week, the RBA (Royal Bank of Australia) hinted an interest rate so our forex strategy this week was to sell any rallies or jumps in AUD/USD. We did so and pocketed 50 pips from the sell forex signals in this forex pair.

But, somehow, the Kiwi (NZD) felt even weaker this week. We know that the economy of New Zealand is connected to that of Australia, but the RBNZ (Royal Bank of New Zealand) chairman said that there wouldn´t be any more interest rate cuts so the Kiwi has been in demand in the past two weeks. So the weakness comes as a bit of a surprise to everyone.

Anyhow, as the expression goes, ‘ours is not to reason why, ours is but to do or die’. Sometimes you just can´t figure out why the forex market does what it does, all you have to do is read the market sentiment and go with the flow. So, that´s what we did this week with NZD/USD, we kept opening sell forex signal in this pair and got very good results. We received 86 pips from this forex pair alone this week.

After the meeting of the three musketeers in the beginning of last week (Kuroda, Abe, and Bernanke), the market implied that helicopter money was coming to Japan as well. It built high hopes on assumptions, as it usually does and everyone rushed to buy USD/JPY. This forex pair rallied for about 500 pips last week from around 100 to above 105.

This week started with the same mindset. The forex market pushed this forex pair further up reaching 107.50. Now, what? Then Kuroda comes out appearing on the screen all innocent and denying helicopter money, killing all hopes that the market had built on assumptions. He did say that they would do more to tackle the inflation and spur economic growth but everyone was concentrated on helicopter money and no one cared about the rest. USD/JPY fell more than 200 pips in a few hours.

The most important event this week though was the release of the first economic data after the Brexit referendum. There have been some positive economic data releases from the UK recently, so some thought that maybe Brexit would have no impact, or maybe just slight impact. Well, this positivity faced a harsh reality this week.

The firm Markit, which carries out the PMI economic surveys, had to make an unusual survey for July on the manufacturing and service sectors. The manufacturing dipped below the 50 level which means contraction, but it has been a soft sector recently so that´s not a surprise. The real surprise was an even deeper contraction of the service sector. This has been the leading sector of the UK economy, so if this sector is plunging what about the other sectors? And real Brexit hasn´t even started yet!

We will concentrate on three aspects of the global economic data. First the data from the Eurozone. The ECB president Draghi on Thursday left everything on hold on Thursday waiting for more evidence in the coming weeks/months in order to decide about the monetary policy. Just the next day the German, French and the Eurozone manufacturing and services numbers beat the expectations, so maybe all the efforts made by the ECB are finally paying off.

The second positive surprise was the data from Canada. The Canadian economy has been suffering in the last two years but maybe we´ve reached the end of the tunnel because we can see a ray of light on the horizon. On Thursday, the wholesale sales made a huge 1.8% jump this month and the retail and core retail sales numbers on Friday showed a 0.2% and 0.9% increase, respectively.

The third surprise was negative and came from the UK. The inflation in the UK beat the expectations and the wages increased as well, with unemployment declining to 4.9%. But, that was old data, which showed the shape of the economy before the Brexit referendum. The post-Brexit economic data released on Friday showed that both the manufacturing and service sectors had fallen into contraction this month, so, there you go Brexiters…

NZD/USD has been in an uptrend since the end of May. It finally broke above the 200 moving average which had been providing resistance before. After that, it turned into support and rejected the price twice when it tried to break below it. This week, though, it was finally broken after the RBA increased the odds of an interest rate hike. Now, big banks are pricing in three rate hikes from the RBNZ until March 2017. The stochastic indicator is oversold and could be an obstacle for the recent downtrend. Monthly chart offers better odds for a continuation of the long-term downtrend on this forex pair. The stochastic has reached the overbought level and the 200 moving average is providing resistance so the continuation of the long-term downtrend looks very real. 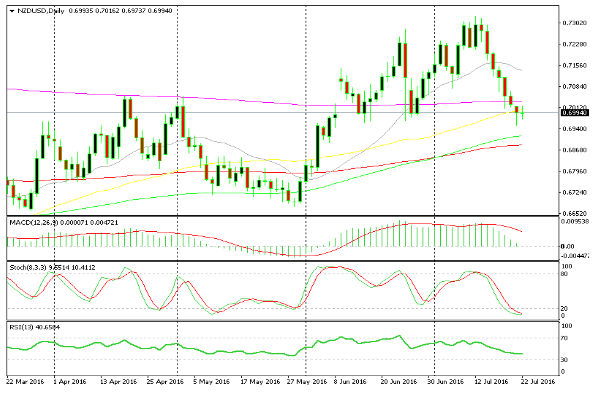 The 200 moving average has now been broken 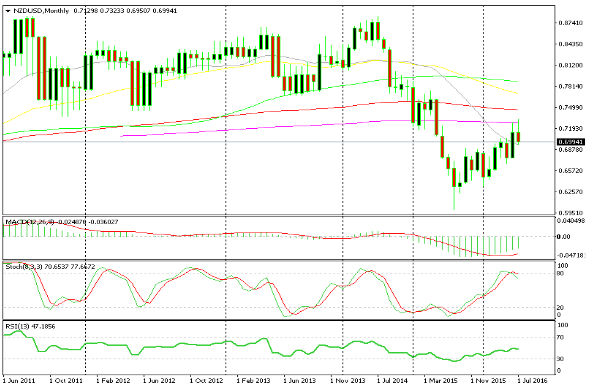 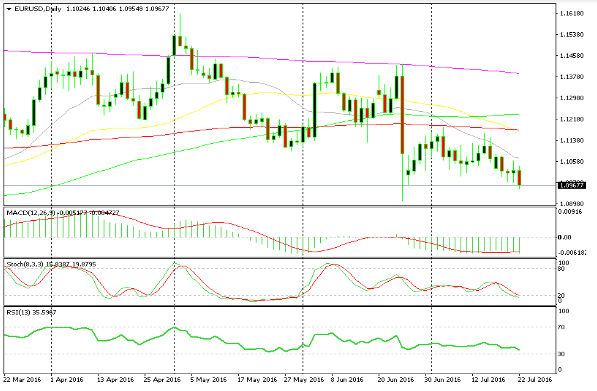 The 200 moving average has turned into resistance now 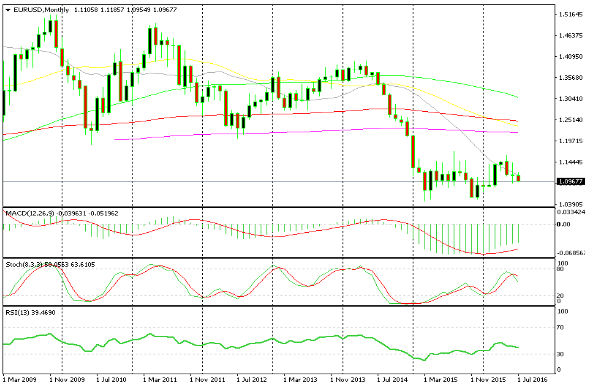 The retrace up seems to be over

We closed the third week of July and made 185 pips from our forex signals. So far we are 352 pips up for the month so far. The BOJ Kuroda killed any hopes for a helicopter money program by the government of Japan and the BOJ. That might be the end of the uptrend in USD/JPY. On the other side of the planet, the British people had a taste of what´s about to come after Brexit. The first round of economic data since the referendum was released ahead of schedule and it showed that some tough times are about to come. The services sector was hit the hardest. Only in August we´ll start to see how the other sectors are facing Brexit.