Hello to all our followers of our FXML team. The hot price action in the forex world has matched the lovely weather this week. A couple of FED members made both hawkish and dovish comments about the monetary easing programme on Tuesday, which increased or decreased the odds of interest rate hikes. Both FED folks were so contradictory that it was entertaining to watch. One saw the cup half empty the other saw it half full. But, at least, that provided us with some nice action.

Then, everyone was holding the breath all day on Wednesday until the FED FOMC minutes were released in the evening. The minutes were more hawkish than the statement, in my opinion, since the focus was on the positive signs of the US economy. But, the forex market didn´t agree and the USD lost more than 100 pips. I guess the market was expecting too much, as it always tends to. The hawkish comments on Tuesday from FED´s Dudley played a part in this as well.

So, all the attention was still on the FED and on their monetary policy, while the GBP sneaked in from the back door. The UK retail sales numbers for July showed a nice jump and that was all the GBP buyers were waiting for. The weak Pound and the good weather might have helped, but that´s still too early for the negative signs of Brexit to filter through to the UK consumer. Still, the Pound took advantage of the numbers and surged about 120 pips higher. There were a few other less important events which we will cover in this weekly review, so keep on reading further down. 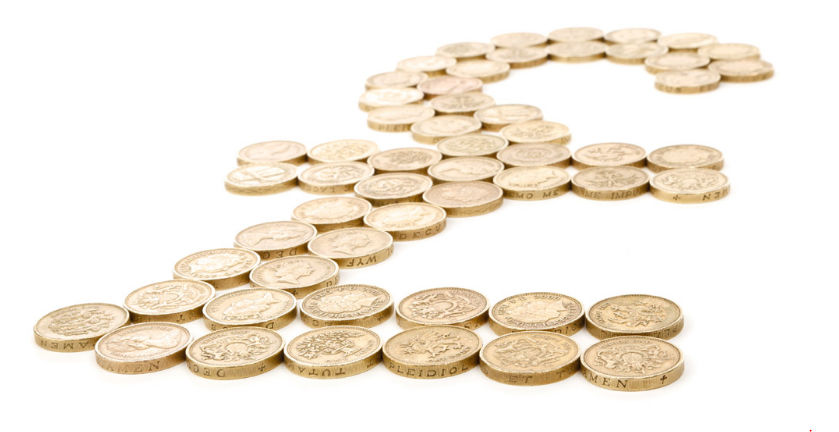 The British Pound is not dead yet

This wasn´t a good week for short-term forex signals. The forex market kept leaning to one side only, so the trends didn´t unfold in waves as they usually do. There were no meaningful retraces which made it hard to spot good trading opportunities and good entry points. That made it difficult to trade the short-term time frames and we had a hard time with them, as you might have witnessed. We opened 12 forex signals, seven of which were closed in profit four-hit stop loss and the rest remain open. The win/loss ratio stands at 64:36.

But, such market conditions present us forex traders with some very nice opportunities to trade the longer term time frames. As you can see from our signals page, we have opened two of these forex signals in EUR/USD and GBP/USD. You may ask ‘But what is the reason for these signals?’.

EUR/USD reached a level where the ECB (European Central Bank) doesn´t feel comfortable. This is the lower line of a strong resistance area and a couple of moving averages are providing solid resistance on the daily and the weekly forex charts. These are the indicators where we base our long-term sell forex signal in this forex pair.

GBP/USD also moved about 300 pips higher this week. But, the 20 moving average on the daily chart is placing a lid on this move and the stochastic indicator is also overbought. Besides, the sentiment towards the USD has been negative in the last two weeks and if it changes it can only be a positive thing for the Buck. So, for these very reasons we opened two long-term forex signals and we are already on a -49 pip loss with GBP/USD, which makes the entire week profitable, including short-term signals, although this forex signal remains open.

Although contradictory, the FED members have been very vocal this week. But, the week started with the Japanese GDP numbers on Monday morning. The GDP missed the expectations and showed that the Japanese economy remained in stagnation in Q2. The Japanese officials must have had a quick look at those numbers when they decided to take coordinated action and increase the economic stimulus programme by 28 trillion Yen.

So yes, the FED members Dudley and Bullard were all over the screens this week as they have nothing better to do. The funny thing is that they kept contradicting each other. While Dudley kept banging the drums on how well the US economy is performing, Bullard seemed very worried about the economic recovery. Dudley praised the employment sector, while Bullard was disappointed by Q2 GDP. Dudley sees two interest rate hikes this year, Bullard can´t even digest one rate hike.

But, the event all forex traders were waiting for this week was the FOMC minutes. The FED minutes from the July meeting were released on Wednesday afternoon and the forex market didn´t like the tone of it. The minutes were more hawkish than the statement and, in my opinion, they were just how they should be at this phase of the US economic recovery – but the market didn´t agree. So, the market sentiment turned sour and the USD seller dug deeper into the hole the USD was in.

Another event the market wasn´t expecting was the positive economic data from the UK. First, on Tuesday, the inflation numbers beat the expectations, with the imported inflation making a massive leap. But, you´d expect that with the 15% decline of the GBP. Then, on Thursday, the retail sales jumped as well. They grew by 1.4% in July. For me, that´s justified as well, because the business worries and the decline in the business activity haven´t filtered through to the British consumer yet, so the worse is yet to come. Still, the GBP took full advantage of it and surged more than 100 pips.

The economic calendar this week started with the Japanese Q2 (second quarter) GDP numbers. The Japanese GDP was expected to grow by 0.2% in Q2 but it remained flat. After all the steps that the BOJ (Bank of Japan) has taken to spur economic growth the GP is still flat. The effects of the latest actions by the BOJ and the Japanese government are yet to be seen in the following quarters, though. At least the trade balance beat the expectations.

Although the economic data from the US has been mostly positive this week, the USD has suffered against most major currencies. The building of the new homes beat the expectations in July by 30k, the industrial production grew by 0.7%, and the utilization of the spare capacity in the US economy jumped to 75.9% from 75.4%. Besides that, the Philadelphia manufacturing index rose by 4.9 points while the unemployment claims remained low.

The surprise this week came from Britain. The inflation, especially inflation from imported goods, really picked up in August but that comes from the weaker Pound. The most surprising thing was the jump in the retail sales. They grew by 1.4% in July – quite a big figure. Well, the Brits still need to eat, drink, etc.

GBP/USD has been in an uptrend this week. In the first part of the week, this forex pair kept moving higher due to USD weakness. Then, the FED FOMC minutes delivered another blow to the USD and GBP/USD started the second leg of the uptrend. On Thursday, the better-than-expected UK retail sales data started their engine again and by Friday morning we were in the 1.3160s. On the daily chart, the price is hanging around the 20 moving average and the stochastic indicator is overbought, which is a good selling opportunity, but the market sentiment towards the Buck has to change first. 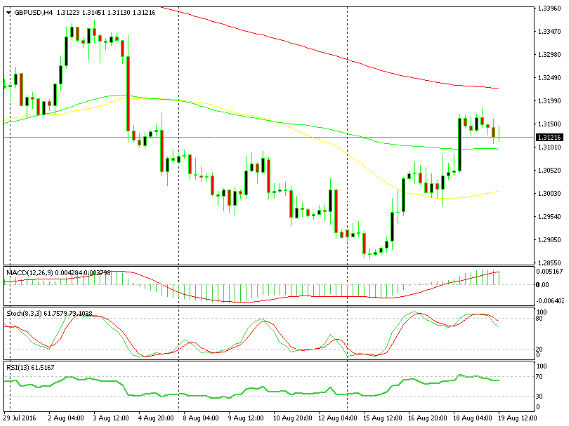 The uptrend has been clear this week 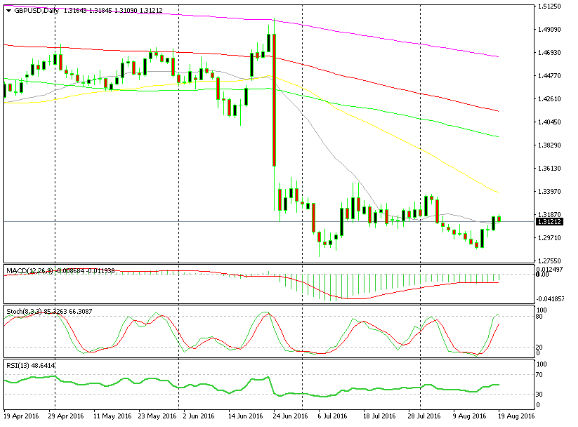 The stochastic indicator is already overbought

EUR/USD has been in an uptrend this week, but unlike GBP/USD, the move in this forex pair has been as a result of a weak USD. If we see the daily chart below, the price has just touched the 200 smooth moving average -this has provided resistance before. By the look of it, it looks like the price is turning down. On the weekly chart, we see that the 100 simple moving average is acting as a resistance level as well, around the same level where the 200 moving average stands on the daily chart. So technically, we can say that the downside is vulnerable. 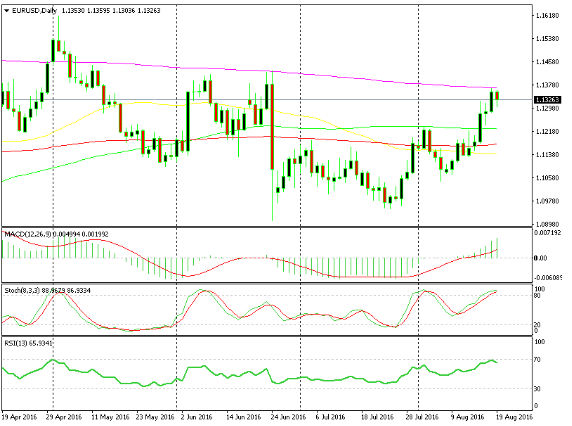 The 200 moving average is providing resistance 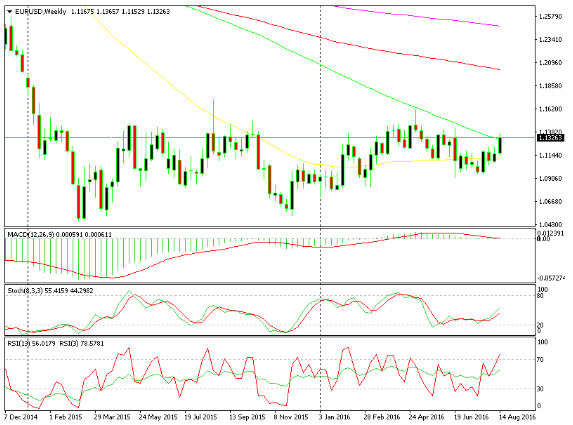 Will the 100 moving average be broken this time?

We closed the third week of August and are heading towards the end of the month and the end of the holiday season. The FED FOMC meeting minutes for July didn´t satisfy the forex market and the USD suffered as a result. The mixed comments from the FED members added more fuel to the fire and made more uncertain the future FED monetary policy. But, there was some impressive data from the UK this week. It doesn´t show the effect of Brexit in full because this was only the consumer data but the Pound took advantage of it. There is a bit more than a week left from the holiday season, so go relax and have fun because September is near and forex trading will enter a phase of full activity. 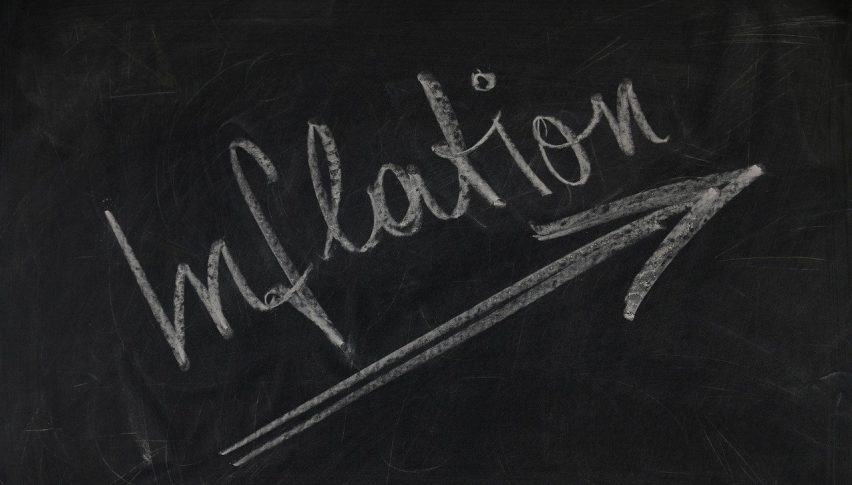