Hello again from a hot office in England! This was the fourth week of the month, so there are only three more trading days left until the end of the month and we´re back on track to finish yet another month with some good profit. This makes it the 26th winning month out of 28 and our profit for 2016 keeps accumulating. It stands at nearly 3,000 pips – so far.

We made 267 pips in total, with long-term forex signals contributing greatly to this. We picked a top in the higher time frame forex charts in EUR/USD and GBP/USD and played it to the beat.

The NZD and GBP were the top performers since the beginning of the week. RBNZ Wheeler´s comments and last week´s consumer data from the UK kept these two major currencies well bid throughout the week. But, the underdog took all the glory at the end of the week. The forex market was expecting a dovish Yellen at the Jackson Hole summit on Friday but she kept neutral with a pinch of hawkishness inside which turned the USD decline around. At the end of the day, Yellen made it a great week for us, so if you want to hear more about it check this review out for more details. 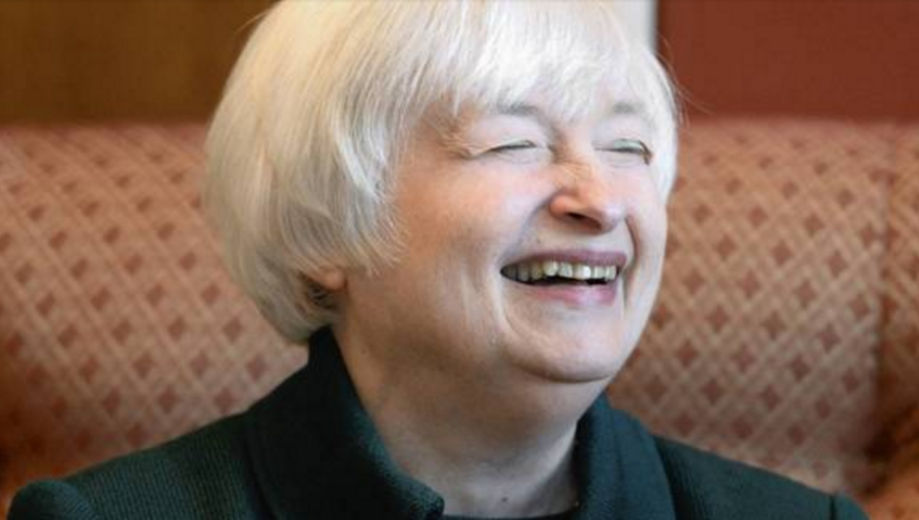 Not even Yellen can be bitter forever, or at least that´s how the market took it

After two weeks of rough forex trading environment, the trading conditions improved a little this week. That gave us that little advantage and allowed us the upper hand. There´s a very thin line which divides winning and losing territories in forex.

Sometimes, we forex traders need that little bit of help to  end up on the winning side. The price action in the forex market this week was just a tad more rational, particularly towards the end of the week, which gave us that little boost to finish the week in profit.

We took full advantage of the favourable market conditions and ended up the week with a nice 267 pip profit. This, together with first week´s profit more than made up for the losses that we occurred in the last two weeks. We manually closed three long-term forex signals, so if you kept them open until the end of Friday, then your profit should be about 100 pips higher now.

Our forex strategy developed as the week progressed. While EUR/USD and GBP/USD advanced towards 1.1340-50 and 1.3270s, the upside was getting tougher after every try and the gains were getting smaller. These levels in these two forex pairs came just shy of 1.14 and 1.33, which are very strong resistance levels. But, as we mentioned, the upside was getting tougher by the day, so we decided to use these levels as entry points for our long-term forex signals. Well, these levels provided solid resistance, so here we are with a very nice profit at the end of the week.

The UK economic data last week was surprisingly strong. It was about time we got some good numbers after the horrible business data two weeks ago. Mind you, the economic data pieces from the previous week suggested a consumer side. The UK consumer is still robust, but the slowdown in the business activity will catch up sooner rather than later. Still, the market kept a positive attitude towards the GBP this week until Friday.

The same thing we can say for the commodity dollars and particularly the Kiwi. The kiwi has been underpinned all week, partly due to the search for yield, since the RBNZ (Royal Bank of New Zealand holds the highest interest rates and, partly, because the RBNZ showed no backbone once again. RBNZ governor Wheeler did his part and said similar things to what ECB´s Draghi usually says when he slaps the Euro down. But, the RBNZ is not the ECB and the same comments cause different market reactions. After all, the RBNZ doesn´t have the entire armour the ECB has.

USD/JPY, on the other hand, kept threatening us with a large move lower. It was flirting with the 100 level the entire week and we know that when the price glues itself to a support/resistance level, sooner or later that levels will let go. Even when the economic data from Japan showed that deflation was creeping up, JPY kept crawling higher. That´s market sentiment for you, the fundamentals point in one direction… is ignored and moves in the opposite direction.

That lasted until Friday when FED chairwoman Yellen finished her speech at the Jackson Hole summit. Those comments turned the forex market sentiment around, which takes us to the next big event this week: the “Hole”.

The FED members have been sprinkling hawkish comment all over the place this week. But rightfully, the forex market was sceptic. We know how dovish Yellen can be and how careful she is in her appearances. She hates giving the forex market reasons to get carried away. So the market ignored the hawkish comments of the FED members and kept a constant pressure on the poor buck.

Finally, the much awaited moment came. The USD surged for a couple of minutes but then reversed and lost about 100 pips against most major currencies. It stayed down for a while until the forex market digested the comments and then the uptrend started. There was just one single comment which shifted the whole market sentiment “The rate hike case has strengthened in the recent months”. Nothing has changed, the speech kept the same dovish/careful tone and the odds for an interest rate hike in September remain very low, but only that line changed everything.

Have you folks gone through our forex course yet? If yes, then you should do now which piece of economic data was important this week. If you can´t then the here you go, the Japanese inflation and the US durable orders together with Yellen´s speech.

Japanese inflation – The Japanese national and the Tokyo CPI (consumer price index) numbers were expected to show a pickup in inflation but instead, they showed a deterioration and we can officially say Japan is in deflation. Right now the sentiment is positive toward the JPY, but once the market sentiment reverses then this data will have a really big impact on the Yen.

Last month the US durable goods orders declined, so the market was eager to see if the decline would continue, but luckily for the Buck, the durable and core durable orders posted a huge jump this time. The USD bulls weren´t impressed but I bet the bears would pile in on USD shorts if the numbers were negative.

Yellen took all the attention on Friday, though. Although she tried to keep the comments as far away as possible from the rate hike discussion and focused on being her dovish self, the forex market took from it what it wanted to and run away with it. The “improved economic conditions” was what the market wanted to hear to convince itself a rate hike is coming and take the buck nearly 200 pips higher.

As you can see from the H4 forex chart, USD/JPY has been trading in a tight range most of the week near the 100 level. Many forex traders – including me – were expecting that this support level would be broken this week, but Yellen´s comment turned the tide around, at least in the short term. USD/JPY rallied nearly 200 pips, but the market sentiment is still bullish towards the Yen, so unless something in Japan changes drastically, the Yen bulls will continue to outnumber the USD bulls. We can see this downtrend in this forex pair in the daily chart. If the USD bulls want to make an impression then they have to break the 50 moving average on the daily chart at 102.85103 and then the trendline, which right now stands at 104.50s. 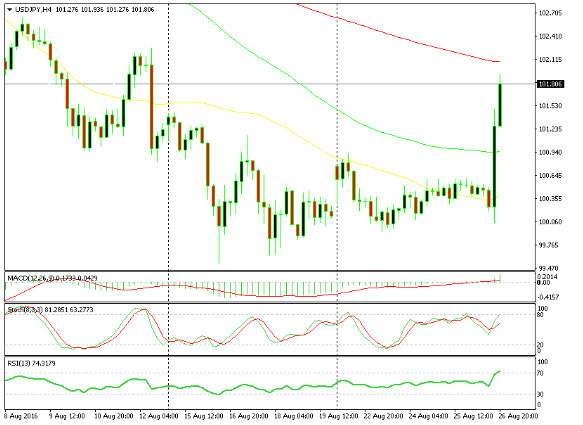 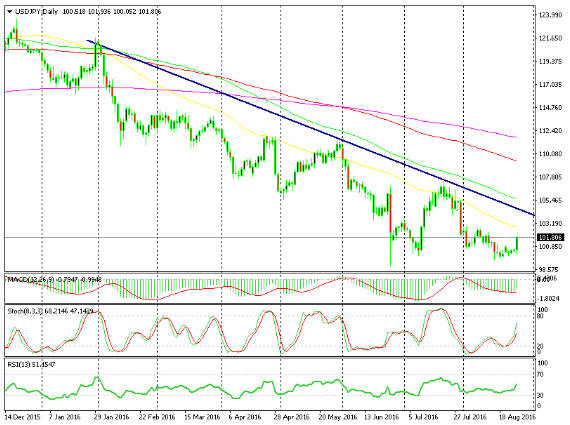 The downtrend this year is very clear

Last week we said that EUR/USD was getting close to 1.14, which is a strong resistance level. Besides the resistance level, the 200 moving average was hanging up there too, which strengthened that level. As we can see from the daily forex chart, the price only touched that moving average once and then started to pull back, until Friday when Yellen delivered the final blow. We also said last week that the green 100 simple moving average (SMA) in the weekly chart has been the line in the sand for about two years. That SMA proved to be the ultimate indicator to break, as the price failed to break above it once again.  As we can see, the price is about 100 pips lower now and looks like it´s heading further down. Still, there are plenty of support levels below which we will analyze as the week progresses. 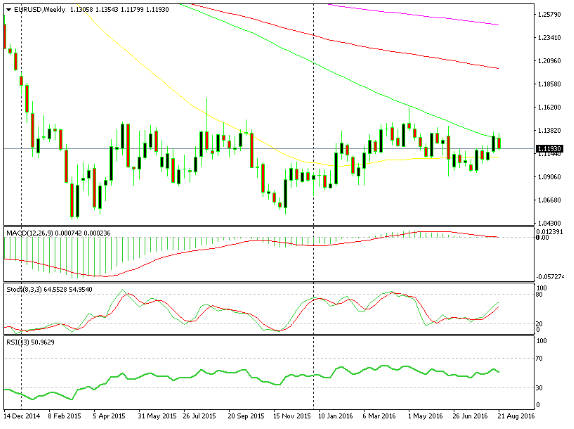 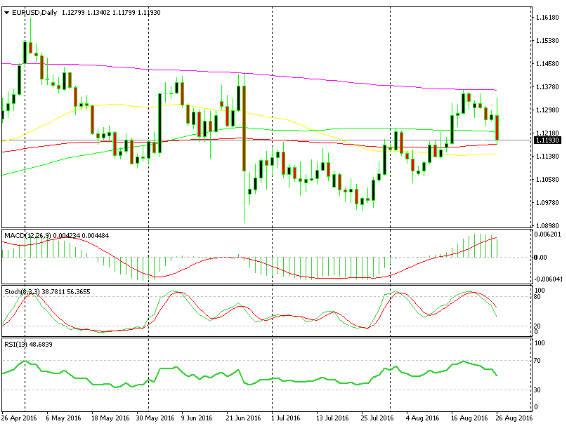 We are approaching the end of the month as we closed the fourth week of August. This week marked a turnaround for this month regarding our performance since we closed it with a 267 pip profit. The market sentiment towards the USD turned from bearish to bullish on Friday, but that was just one day. We´ll have to wait and see if this positive momentum continues.

The US economic data next week will have a say in all this so keep an eye out. There are a couple of economic data releases from the UK too, so watch that in order to see if the negative Brexit impact on the British economy will continue. We´ll still be with you with our live market updates, so check them out as well if you find difficulties in interpreting the economic data and the forex market.