August is over and summer is coming to a close. Yep, that´s right folks, the best season is over for us who live in Europe, Northern America, and Central Asia. No more fun and games for us. At least we forex traders can still get the adrenaline and the excitement we long for from the forex market. Since the holiday season is over, the London and New York forex traders are back in business and liquidity is back to normal levels. We can´t say it will be easy trading forex now, but the price action will be less volatile.

August was the month of the truth for the UK. We had a chance to have a sneak peek at the shape of the UK economy after Brexit when an unusual round of economic data was released by Markit in mid-July, but that only took into account the first two weeks of July. So, August was the month we got to see the real post-Brexit reaction. At first, the economic data was terrible, but then it improved somewhat and all we had were contradictory figures, not only from the UK but from the US. The low liquidity was another reason which made trading forex pretty difficult.

So, August wasn´t easy, but at the end of the month, we finally came on top, closing it with a 336 pip profit. Although we made about 100 pips from our short-term forex signal, the long-term forex signals accounted for 2/3rd of our monthly profit. This is the sixth consecutive profitable month for us, which adds up to the total profit for 2016. 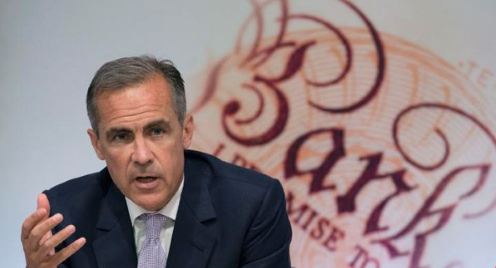 Will Carny and Theresa May save the UK economy or will they leave it entirely to the UK consumer to do the job?

As we said in the opening section of this review, low liquidity and contradictory economic data made it difficult to trade forex, particularly for the short-term forex signals. But we refused to give up and put up a bitter fight, which eventually proved to be enough to beat the forex market once more. We changed and adapted our trading strategy to fit the market behaviour which worked out pretty well… and here we are at the end of August with a 336 pip profit.

In the first week, we tried to keep it simple regarding the post-Brexit economic analysis from the UK and the EU before going full throttle. Well, that trading strategy didn´t prove to be successful, but we quickly shifted to a long-term trading strategy. We opened a long-term sell forex signal in GBP/USD just one day before the BOE (Bank of England) meeting.

These kind of forex trades that are opened just one day before a central bank meeting are a bit of a coin flip because you never know for sure what will happen. But, in the case of Brexit and after receiving a handful of really horrible data, you need not be a psychic to see what´s coming. So, the BOE met the next day; they cut the interest rates, delivered a very hawkish statement and suggested another rate cut soon. The GBP inevitably crashed and we received a nice 120 pip profit from that forex signal. So we closed it manually, but if you have stuck to the original take profit then your profit for August must be about 300 pips higher because that level was reached a few days later.

The same situation continued for the next two and a half weeks, we tried to beat the market with short-term forex signals but the market fought us back, so we had a tough time in those two weeks. At a moment a proverb struck my mind: “Don´t argue with a stupid person, he will drag you down to his level and win with his experience”.

So, we tried to impose our own way of trading rather than being dragged down by the market. We really reduced our short-term forex signals in the remaining 8-9 trading days and concentrated on long-term signals. It proved to be successful once again and we quickly emerged above water, eventually closing the month with a 336 pip profit.

Most of these long-term signals were in GBP/USD but we also opened a sell signal in EUR/USD when the price crawled near the 1.14 resistance level. In total, we opened 51 forex signals this week – five of which were long term ones. 15 of the short term signals hit stop loss while the rest were closed in profit, so the win/loss ratio for August stands at 71:29.

When August arrived I thought judgment day is finally here… let’s see how Brexit has really changed the economy. We did have a preview of what was about to come in mid-July when we received some horrible economic data from the UK. But, many hoped that the July numbers were just a bad dream and everything would return back to normal.

I just wanted to see if only a referendum could have such a big negative impact on the real economy so quickly. After all, that was just the referendum, Brexit hasn´t happened yet and it will take up to two years to start materializing. But, the economic data showed that the markets and businesses are really quick to react in this globalized world.

Construction fell into contraction (Brexit is starting to rhyme now) and the manufacturing too. But the hardest pill to swallow was the contraction of the services sector. The service sector makes up for about 75% of the UK GDP and the UK takes pride in its financial industry. London is home to the insurance industry, investment and hedge fund industry, as well as foreign exchange. Most of the income comes from these three industries together with the housing/construction sector.

That was sad, but quickly the picture brightened up. The consumer side of the economy remained pretty upbeat. The retail sales, the wages, the inflation, unemployment claims and the CBI sales all remained positive and most of them beating the expectations.

So yes, the consumer side of the economy is holding up well since people can´t just stop consuming because of Brexit, but there´s fear in the other half of the economy: the business side. Fear is a very dangerous in the financial world, fear causes the economic crises. Do you think the collapse of Lehman Brothers is what caused the 2008 crisis? It was fear, which quickly turned into panic. Businesses stopped investing and the consumers started putting their cash under their mattresses. That meant lower prices, lower profits for companies, lower wages, job losses, lack of investment and new jobs creating a vicious circle and boom… look where we all are now nearly a decade later, the net income is now lower for the average working person in the developed world than in 2008, the lost generation. And the UK is only on the second stage of Brexit, there´s more to come. Will Brexit turn into another lost generation for the Brits?

Oh yeah, just one last thing. FED chair Janet Yellen made her first hawkish comment in as long as I can recall, and so the market is all hyped for an interest rate hike in September. She´s not the kind of person to drop hawkish comments like that, so there might be a real case for a rate hike here.

All the attention was on the economic data from the UK although this data from all over the globe was contradictory this month. The unusual report in July had raised some eyebrows for the concerned parties, such as the UK government, the BOE, the UK in general, the EU and obviously for the forex traders. The economic data started coming out since the first day of the month and it wasn´t good.

The manufacturing sector missed expectations although they already priced in a contraction. The construction sector came above the expectations, but at 45.9 points the contraction was even deeper here. Finally, the toughest blow came, the UK services sector fell in contraction too, a real disaster. The UK just can´t have that. Businesses are really restraining themselves from investing.

Having said that, in the next two weeks the UK consumer managed to raise the morale of the nation again. The inflation surged, although that´s imported by the weaker GBP, the wages grew by 0.1% and the retail sales jumped by 1.4% in July. That calmed some nerves and things seem to be quieter now.

The economic data has been contradictory in the EU for as long as 5-6 years, so that´s not a surprise. It continued like that in August as well. But the worrying thing is that the US economic data has starting to oscillate and in August we saw quite a few data pieces from the US which oscillated from positive to negative and vice versa.

USD/JPY has been in a downtrend this year, driven by risk-off sentiment. But it looks like this downtrend is running out of steam and the sellers might as well have thrown the towel by the look of it. The monthly chart shows that the sellers have tried three times to break the 100 level and although they might have succeeded to pierce it a couple of times they couldn´t hold the price below it until the end of the month, and so it doesn´t count as a proper break. On the daily chart, we see that the price has retraced but the downtrend line is still intact and we can be sure of a trend reversal only when the price clearly moves above the trend line. 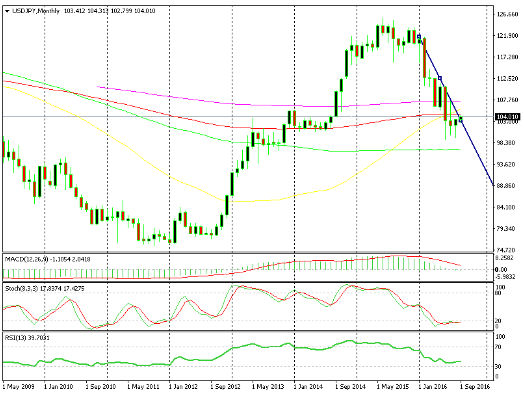 Looks like a base has been formed at the 100 level 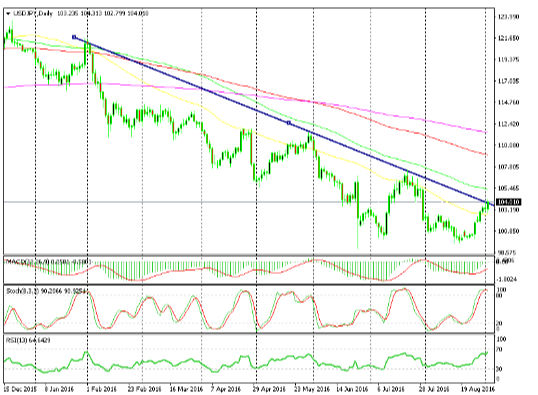 The reverse is not confirmed unless the trendline gets broken

Looking at the monthly chart, NZD/USD started a long-term downtrend in 2014, but after a period of consolidation by the end of last year, the price has slowly moved higher helped by the hunt for yield. In uncertain times the investors look to park their cash where the highest interest rates are found. Adding to that is the security that the central banks provide. So the daily chart does show an uptrend for the time period that this forex chart includes, but this forex pair is overbought in the monthly forex chart. That looks like a perfect setup for a long-term sell forex signal after this retrace up. The 100 and 200 moving averages are bound to provide some resistance and probably bring this retrace to an end. 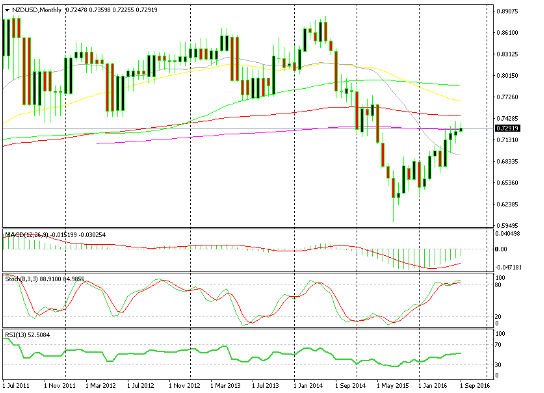 This looks like a perfect setup to sell the pullback 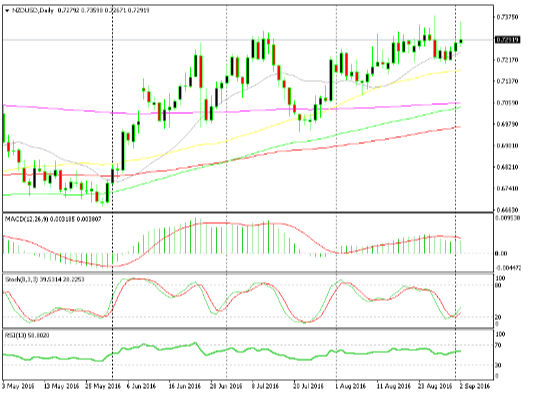 The uptrend on the daily chart remains undisturbed

So, here we are in September now, having closed the month of August and summer altogether. The first effects of Brexit were contradictory, the consumer side of the UK economy is holding up well while the business side is in panic. It remains to be seen which side will win in the coming months. Next month will be all about the FED and the alleged September rate hike. The BOJ and BOE might surprise us as well with a hat trick so stay alert guys. We had another successful month with more than 300 pips in our pockets and hopefully we do even better in September.

Is Gold Turning Bearish On Higher Interest Rates?
9 hours ago