Only a miracle can change the US economic outlook

The US CPI (consumer price index) is on the economic calendar today. This is very important because this is the number that the government and the central bank uses as a standard measure of inflation. In my opinion, the PPI (producer price index) is a more accurate and realistic measure and there are signs that the institutions might soon switch to PPI, but for now the CPI is the real deal.

Anyhow, the core and the main CPI numbers are on the schedule today and the forex market is focused there. They both are expected to move up one point but that won´t change anything for the FED. After the soft numbers we saw yesterday, today´s inflation figures need to jump by 4-5 points to have an impact on the market.

But, that´s very unlikely. In fact, after the PPI data missed the expectations yesterday I´m expecting the CPI to come out below expectations as well. That´s a dovish scenario since CPI is just above flat at the moment and a move lower would not be welcomed by the FED.

On the other hand, the FED might have made their mind up already regarding the interest rate decision next week and the negative US economic data we have seen recently might just throw us off. That´s why I am planning to open a sell forex signal in EUR/USD or a buy forex signal in USD/JPY if the CPI data disappoints today. 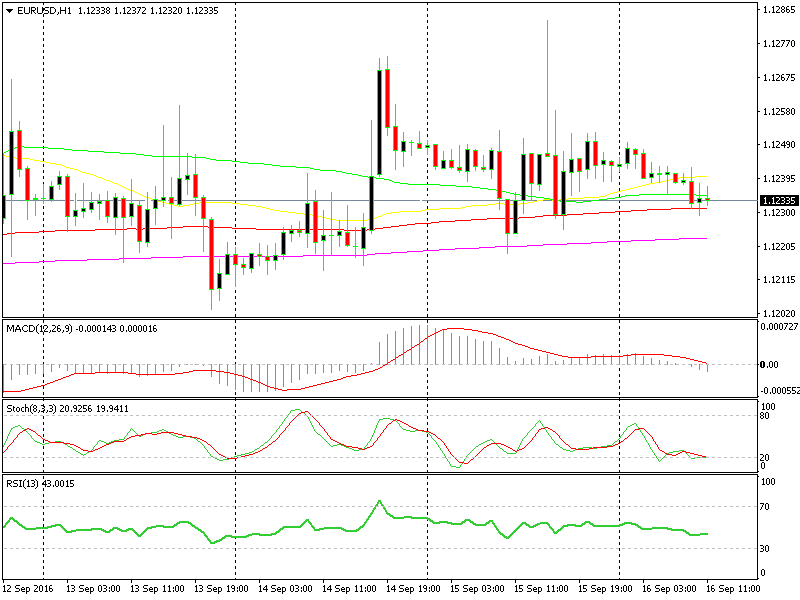 EUR/USD has been trading water since yesterday afternoon, waiting for the CPI numbers

The USD might move lower, but the BOJ is coming up next week with a few surprises I expect and the ECB will start getting increasingly dovish in the coming weeks/months, which will weaken these two currencies. The USD might be in a bad place, but other major currencies are in even worse positions, which make the Buck seem like a good investment.

EUR/USD Makes a Break Above MAs, After US Q2 GDP Misses Expectations
8 hours ago