The BOJ – The picture is getting clear now

There was some confusion this morning over the BOJ (Bank of Japan) statement and the next steps they´re going to take to tackle hhmmm everything, from low inflation, to slow economic growth and aging population. Among all the numerous headlines and comments from the BOJ, I and many other financial analysts thought that they would increase the amount of bond/asset purchases for the QE (quantitative easing) programme. But that´s not exactly what they promised to do next, after taking many steps over the past years to make Japan bounce back from the ground.

Instead, they´re going to control the yield curve, which sounds like another fancy name to the general public. Basically, it is just a relation between the borrowing/lending costs for short and long term periods of a major lender and many minor borrowers and vice versa.

But in reality, this means that they won´t do anything. At best, they will do more of what they´re actually doing, which hasn´t had any success so far really. I don´t understand how can you expect a failure to turn into a success if you do the same things continuously, only this time you do them for a longer period of time.

The Yen surged at first, after there was no rate cut, but then jumped amid confusion in the forex market. Now the picture is getting clear, there´s nothing on the table that we haven´t seen so far and obviously, the market is not impressed. The US traders joined the European counterparts a couple of hours ago and the forex charts show that both sides are falling in line now, they don´t believe the BOJ has the power to turn things around. 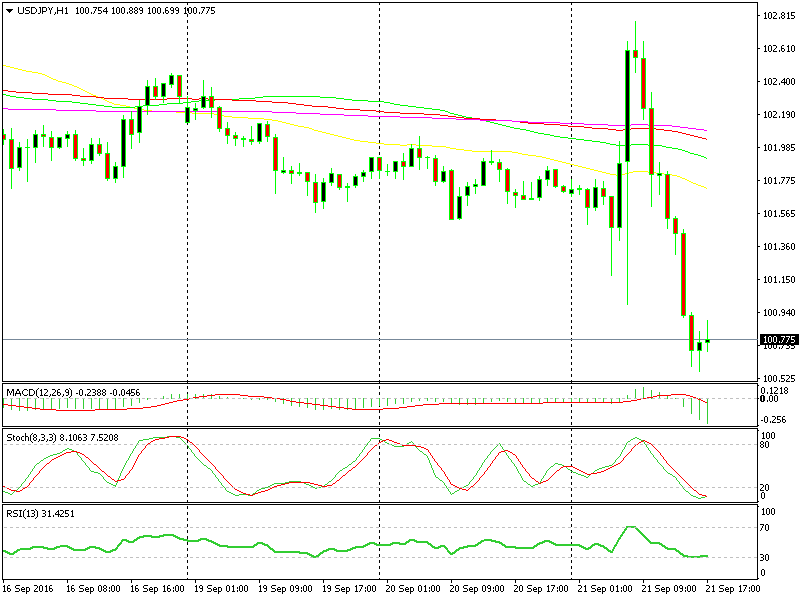 The price action is telling us what the market thinks about the BOJ.

When it comes to Yen, failure to assure economic growth translates into JPY strength, exactly the opposite of what would happen to other major currencies. So, the Yen pairs are about 200 pips lower now with USD/JPY creeping closer to the 100 support level.

I guess the only reason that this level is still in play is the FED meeting later today. If the FED disappoints too, then 95 here we come.