Another Day at the Office for the Central Bankers

They just won´t let us be, will they? There´s no rest for the wicked, but the forex market never rests either. On the bright side, this 24/7 market continuously brings us trading opportunities, so there´s no gain without pain.

ECB president Draghi is live at a conference in Frankfurt. He´s talking about banking and insurance sectors, teaching the guys who have been in this industry forever how to do business. He´s saying that over-banking and the extra capacity reduces profits and makes them not very efficient.

Anyone knows what over-banking is? Does that mean that they keep the cash longer at their banks instead of lending it? If that´s the case, (I have seen it in some countries in Europe) then it´s not their fault. All businesses want to make money, as much as they can, and so do banks. It´s the economic situation that is not very stimulating for companies and consumers to go on a borrowing and spending spree like they did before the 2008 financial crisis.

He´s also reminding insurers to reform their business models in order to increase their profitability. Cursing the EU officials for being power-hungry populists who don´t have the guts to step up to their duties and get the Eurozone out of the crisis makes sense. But teaching businesses how to run themselves…

Anyways, he´s not expecting to talk about the ECB monetary policy, but keep an eye out just in case. Either way, we'll let you know if such thing happens.

Later on, the BOE member, John Cunliffe, will be speaking at the same conference, but the BOE (Bank of England) governor Carney will be the one to watch. He will make his appearance at around 6 PM London time (7 PM CET). 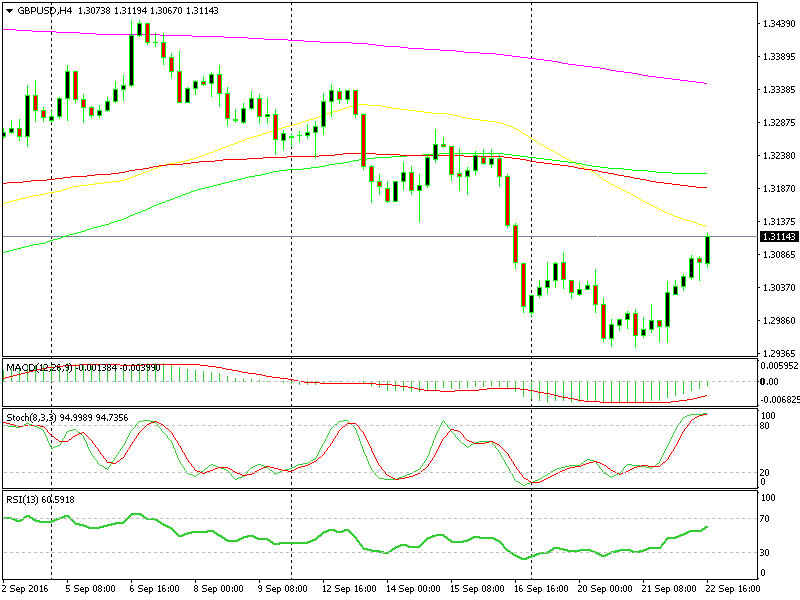 We´re going to play the fade trade after this surge in the H4 forex chart.

The GBP is feeling adventurous at the moment with GBP/USD jumping up to 1.3120s. This looks like a good opportunity to short this forex pair before Carney starts talking about the next rate hike in a few hours. In fact, we just opened a long term forex signal at 1.3120, looking for at least 100 pips.