On last month´s monthly review, we mentioned that this month was going to be different from the previous. As in, the summer ended and the relatively quiet market usually comes to an end.

That´s exactly what happened. This month, the traders came back from their summer holidays and the big players, such as central banks, got back to their routine. This means trying to confuse the forex market. In their defence, that´s not their purpose. They´re just doing their job trying to get the economy back to normal, but in a globalized world, all major central banks and central governments must work together to beat this “virus” that infected the world economy in 2008. Anyway, big players might have had a great impact on the market but they didn´t affect our results this month. We added another 462 pips to our yearly profit in September.

So, yes, the big players dominated the market this month. The BOJ (Bank of Japan) had been building up the market expectations for about three months and when the time came they came up short of keeping their promises. Instead, they turned their attention to the yield curve.

There was a reason to believe an interest rate hike might be possible in September after the pretty hawkish comments from Yellen and a few FED members, but they decided to stay on hold again. That said, they made it clear that they will hike the rates in December, unlike the ECB which left the market with no clue regarding their policy.

The meeting of the large oil producers in Algiers also had a substantial impact on the rest of the forex market, besides the CAD pairs. OPEC members finally reached a deal but we´ll see how it will be implemented if it reaches to that point. 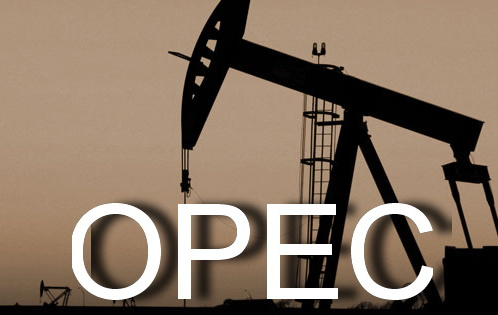 In August we decided to use the long-term signal strategy. Nothing was clear back then, as the big cats of the industry were in the holiday season, so the market liquidity was very low. The price was driven around by the market sentiment which kept shifting from positive to negative, so it was best to lay off the long-term forex signals, or at least cut down on them like we did.

This month, the big players such as hedge funds and investment banks came back in the market, but in the beginning, we were not sure how this would impact the market. It´s always a bit difficult for forex traders to adapt to the new environment after the holiday season, particularly with all the central banks ready to get their 5 minutes of fame after weeks of quiet.

So, we decided to use the short-term forex signals, because we didn´t know the outcome of the meetings from all these central banks this month, which proved to be successful since we made 462 pips. It´s wiser to keep the risk limited when you have all these economic events coming up.

We used the “buy the rumour and sell the fact” trading strategy. Buying the rumour means that you go on the same direction as the central bank rhetoric implies. The rhetoric of the ECB (European Central Bank) and the BOJ were dovish, while the FED rhetoric was dovish until the second week. Therefore, we decided to sell the Euro and the Yen and buy the USD, at least until the rumour was over.

The only long-term forex signal we opened was the GBP/USD sell signal. We opened it by the end of the third week after Carney had his moment of fame. The logic for this was based on H4 forex chart, if you see below the price was close to the 50 moving average (MA) in yellow and the stochastic indicator was already overbought.

The initial target was around 300 pips but we closed it for a 110 pip profit. It slipped another 100 pips that day, so this was a nice bonus on top of our 462 pip profit for those who closed it at the bottom of that move. We lost 14 out of 54 signals this month with a 26:74 win/loss ratio. 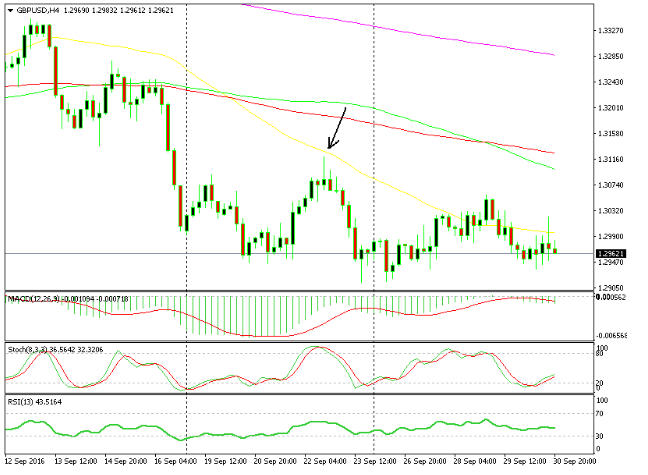 Last month, Brexit was the highlight of the day, but now the market has finally come to terms with it, and there were no major moves from Brexit-related events this week. The BOE Carney had a speech on the third week but the market sort of ignored him. We can say that, for now, we are safe.

The major market events in forex this month were the FED, the ECB, and the BOJ meeting and, of course, the oil producers meeting.

The big oil producing countries met in Algiers in September with the goal to stabilize the oil prices. A lot of opinions and plenty of ideas and were thrown around at the table, followed by a lot of objections. The row between Saudi Arabia and Iran which continued in Algeria as well was the main obstacle to reach a deal, which they finally overcame it. But, not before Russia left the building, though, so it was mainly OPEC members. At least that stirred up the market and turned the sentiment positive.

They finally agreed to cut the output by 700 million BPD (barrels per day). That´s a sensible decision but there are a couple of glitches, which is always the case with such agreements.

Will the other non-OPEC oil producers agree and participate in this?

How will the cut in production be spread between all participants?

When it comes to details everything becomes harder. Which country will be the first to implement the output cut, when everyone is trying to pump as much as they can to make up for lost revenue from low prices? Did you know that oil output reached a record level in September?

The market was expecting the ECB to stay put this time, but also give us some hints of the next move which might be another rate cut or an extension of the QE program. Surprisingly, Draghi was more hawkish than many market analysts expected. He´s trying to play the ;wait and see; game before the ECB makes any further moves, which the Germans obviously love.

Similarly to the ECB, the BOJ did nothing in this meeting either, apart from targeting the yield curve. But in this case, the forex market was expecting some strong action from the BOJ and it was the BOJ to hype all the expectations. The BOJ got lucky this time because the FED meeting was coming up and the OPEC meeting slightly turned the market sentiment positive, otherwise, we would be seeing USD/JPY down to 95 by now.

By the end of August, Yellen delivered a slightly hawkish statement which got the market excited. But the other FED members killed all the hopes for a September rate hike, probably on Yellen´s orders, so there would be no big surprises after the FED´s meeting. By the time the FOMC meeting took place the odds for a rate hike were about 20% which is very low, so it wasn´t a big surprise when they left the things as they were.

But, considering everything that was written in the FOMC statements and all the things that were said in the following conference, we can say that December 14th will be the day, just like last year. The employment and labour market have been the strongest aspect of the US economy, so if you base the next rate hike on employment like the FED did, then you left yourself no other way out.

Looking at the Japanese economic data, we can say that the market expectations for some strong action from the BOJ in September were justified. The BOJ has done almost everything it could in the recent few years, yet the economy remains sluggish. The industrial production declined again in September, while the household spending and retail sales fell by 4.6% and 2.1% so far this year, respectively. This is the reason the BOJ must continue easing the monetary policy. At least, the GDP grew by 0.2% in the Q2.

In Europe, we are starting to see things picking up somehow. The manufacturing and the service sector numbers made some decent gains this month but the most positive news was the decent substantial jump in the German inflation numbers. I don´t blame Draghi for keeping the rates on hold this time.

The FED had a scare at the beginning of the month. The US economic data suddenly took a turn for the worse during the first half of September with non-manufacturing PMI declining to the 50 level (breakeven) and the manufacturing PMI number showing a contraction of this sector. Perhaps that´s the reason Yellen sent the FED members on a dovish campaign to cool the market expectations for a September rate hike.

USD/CAD has been the tail of the dog in the recent years. Whichever side the oil has taken, the CAD has followed suit. Oil has traded in a $10 range between $40 and $50/barrel in the last several months, so USD/CAD has traded in a range also, between the 100 and 200 smooth moving averages on the daily chart – as you can see on the daily forex chart below. This month, though, this forex pair broke above the 100 MA in red on the top side, which looks like it´s turning into a support now. On the weekly chart, the 50 and 100 simple moving averages (MA) have been the ones to provide support and resistance for this pair. The 50 MA pushed the price back down once again in September, so the resistance in this timeframe chart is still valid, which means that the range is still intact. 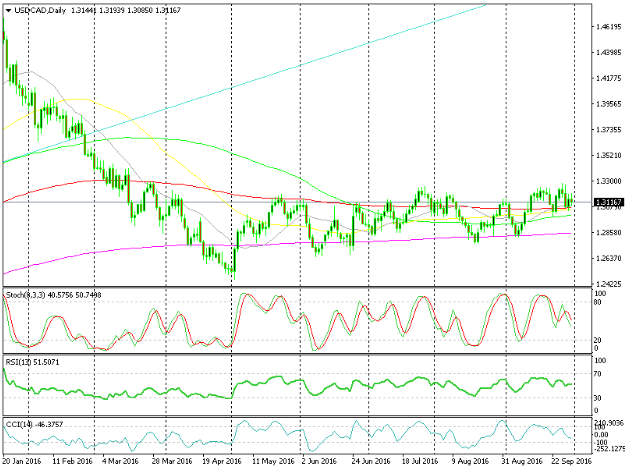 The 100 smooth MA in red is turning into resistance now 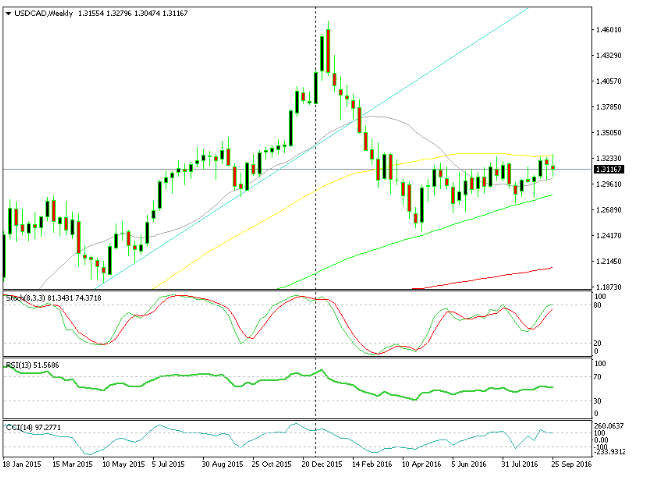 Looking at the daily chart, we can see the uptrend in NZD/USD. It hasn´t been a very strong update but it has been consistent. In the last two months, the 50 MA in yellow has done a good job providing support on dips. The monthly forex chart paints a different picture, it shows us that the long-term trend is down and the recent uptrend in the daily chart is just a retrace of the long-term downtrend. The stochastic indicator has reached overbought levels and the 100 and 200 smooth MAs are providing solid resistance in this timeframe chart. This means that the uptrend might have come close to an end and the next leg of the downtrend is bound to follow. The weekly forex chart is telling us the same thing as well, so maybe it is time to open a long-term sell forex signal here. 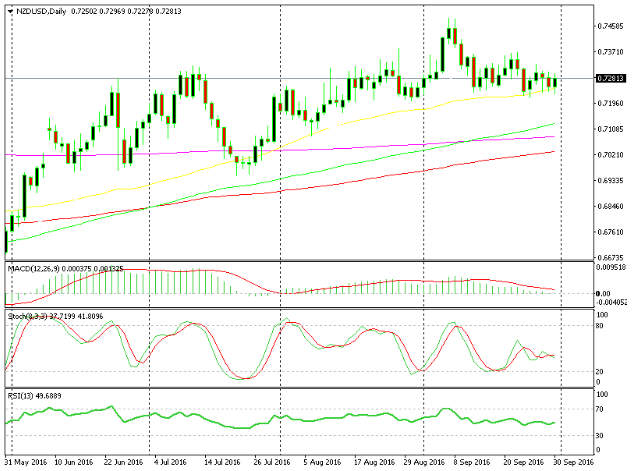 The 50 MA in yellow is the ultimate support to break 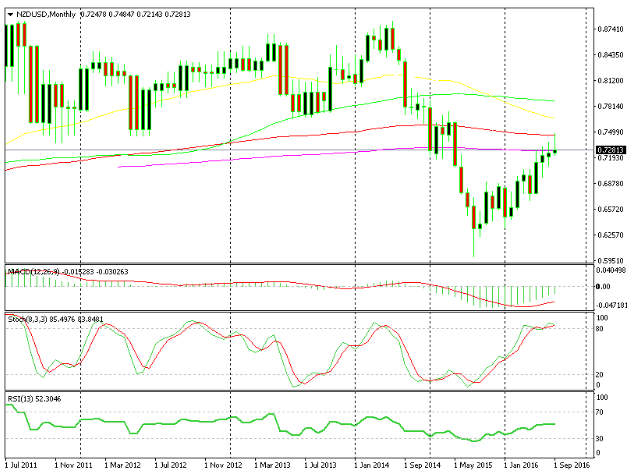 This was a month full of action, with many central banks having a shot at the market trying to make it go their way. The OPEC countries reached a deal at last but it won´t be easy convincing other big oil producers like Russia and implementing the agreement.

We had another pretty good month worth 462 pips, so we´re making good progress with our yearly profit. The schedule is light next month, so it will be a quiet month regarding central banks, apart from RBA (Royal Bank of Australia) and RBNZ (Royal Bank of New Zealand), which we hope will make it a tad easier for all forex traders.

Bullish Reversing Signs in USD/CAD, BOC Sees Rate Cuts in Late 2023
11 hours ago
EUR/USD Facing the 200 SMA As Sentiment Remains Negative
We have turned bearish in EUR/USD as the bullish pressure fading and the price heading for 1.07 now
13 hours ago