What do you do when the reaction to the positive UK construction data is null? This is the question most traders do to themselves.

For me, the question we must ask ourselves is what do we see in the price action? Or, how can we read it this neglect of the construction numbers?

We know the tough support level at 1.2800-50 has finally been breached, but if we´re considering opening a long-term sell forex signal we must assess the strength of this down move. We can do that only by reading the price action; the price action tells us the market sentiment. 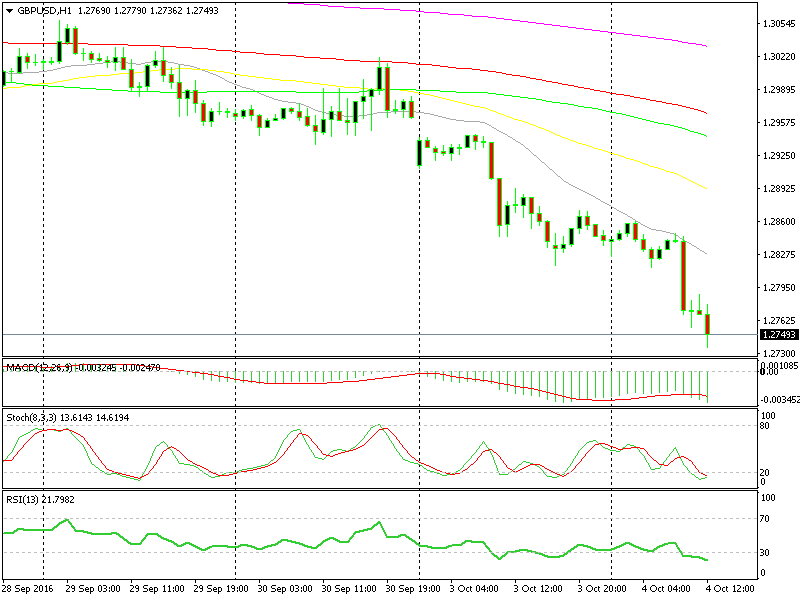 So, what's the price action telling us about the market sentiment in GBP/USD?

1. No appetite to push above resistance – The market sentiment is built up over a period of time, so to understand it we must analyze price action since Brexit. After the initial 20 cent drop following the Brexit vote, the price has been trading in a range with the top at 1.3530s first. But then, the tops started getting lower and lower.

When the buyers are willing to unload their buy positions at 1.35 and the sellers are willing to open sell position at this level, then there´s only one thing we can think of as forex traders, the market is too afraid to push higher, When the add the lower highs, then the market sentiment becomes even more bearish.

2. Down on bad news, flat on good news – After the terrible UK economic data in August, the situation improved and the economic numbers from the UK rebounded again in September. The Pound made a correction after the late August/September positive numbers, but that was that. After that push higher, all the negative numbers grabbed the attention while the positive data kept getting ignored.

This currency goes down hard on bad news but has difficulties climbing up on good news, that only tells you one thing, the market sentiment is bearish. No need to even consider going long on GBP forex pairs.

3. The construction data can´t be ignored – That surely was the case until recently, but today we saw that GBP/USD barely climbed 20 pips after the positive UK construction data. The construction and the service sectors are very important for the British economy so a few months ago, this forex pair would have jumped 200 pips if the actual numbers beat the expectations by 3 points, but not today. That´s another great signal that the market sentiment is strongly bearish towards the Quid.

Someone would say "Yeah, we knew this since the Brits voted out of the EU, why point this out now".

Because the market was confused until the last couple of weeks. Forex traders got over the immediate Brexit fears which gripped the forex market after the referendum and the positive economic data in September activate a few GBP bulls. Now the market has come to terms that Brexit will happen for real and judging by May´s comments over the weekend, the chances are that it will be a hard Brexit.

Now the market has become really bearish. You can strongly say that the market is bearish when the move down is steady but relentless, such as now.  The break of 1.28 support level added extra pressure to the bulls which made them throw the hat at last.

A British colleague of mine has been buying dips in this forex pair from 1.31 to 1.2850. It has worked well for him over the last few months as the price has bounced several times to 1.33 from this level where he booked profit, but now he gave up. That shows that even the bullying bulls are turning bearish now.