The Pound Fell Through A Pocket Hole, But Didn’t We Warn You? - Forex News by FX Leaders

The Pound Fell Through A Pocket Hole, But Didn’t We Warn You?

Who was awake last night to experience the collapse of the once-great British Pound? If you were awake and saw the GBP chart, then you couldn´t help but be amazed by it. I was preparing today´s homework when it happened, analyzing forex charts trying to spot trends and support/resistance levels for today.

At first, although it was quite large, it seemed just another one of those panic moves. We have seen 500, 600 and even 1,000 pip moves this year, particularly in the JPY pairs. The GBP lost about 20 cents in a day after the Brexit referendum. But then, when I switched to the 1 minute chart, I realized how strange this move was. 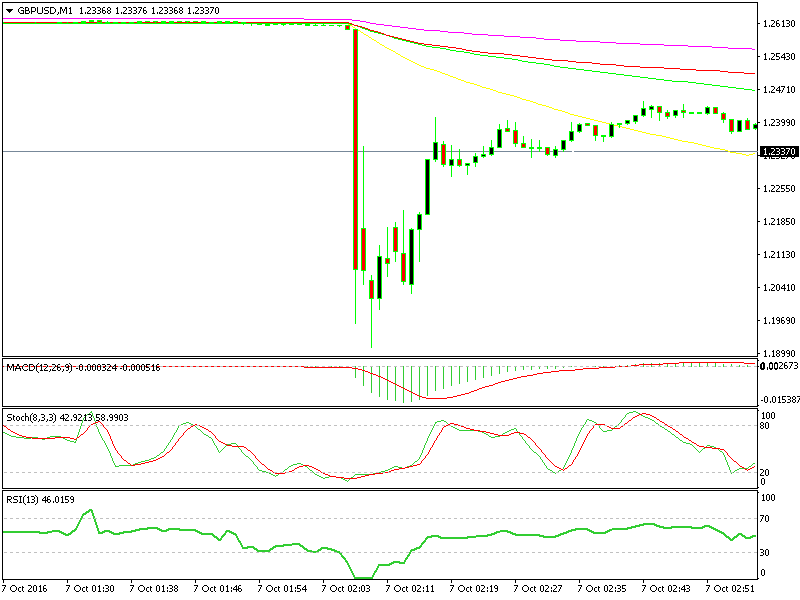 Who said you couldn´t make 700 pips in one minute?

There was no news at all, no economic or political events; most of the move happened in less than 1 minute and all the mayhem was over in just over 2 minutes. It was a flash crash. I don´t really know the exact amount of pips GBP/USD fell because all brokers and live feed providers have different lows. The ETX MetaTrader4 platform I usually use is printing 1.1812 as the low. Bloomberg has 1.1841 as the lowest price, EBS has 1.1821 and I can see 1.12 in the IG trading platforms.

This will be a big issue between forex brokers and the forex traders who had open positions on GBP pairs. Imagine you got has an open buy position in GBP/USD and then a minute later the price on IG platforms is 14 cents lower.

I heard many brokers had problems filling the orders too. Many stop losses have been missed, which resulted in some hefty losses for fellow traders. This looks like a mini SNB (Swiss National Bank) crash, if you remember in January last year, when the CHF pairs fell about 50 cents after the SNB removed the EUR/GBP peg. Fortunately, we didn´t have an open signal in GBP/USD or other GBP pairs, so if you only use our forex signals for trading then you must be fine. Otherwise, check with you brokers guys, check the lowest price of your broker, the closing price of the trade if you had one open etc. That´s if your broker closed your trade before getting a margin call.

The funny thing is that only on Wednesday we posted a market update here which focused on price action and market sentiment. That was the second update about the market sentiment in GBP/USD, after the one we posted on Tuesday about the same thing. We mentioned on those updates that we are only looking to sell this pair, given the extremely bearish sentiment.

Now, I don´t like to brag about my forex analysis and forecast, but it´s hard to let it go by unnoticed when you forecast a GBP collapse only a day ago. I never expected the move to be so vicious, but the signs were there.

Many forex analysts are scratching their heads why this happened. Some say it was a fat finger where some desk trader places a large trade adding an extra zero at the end by mistake. Some say it was an algo malfunction, some blame low liquidity, while others point their fingers at the French President Hollande who made some hard line comments last night Hollande about Brexit. But to me, it was a mixture of toxic ingredients which produced this sour soup, with the negative market sentiment being the main driver.

By the way guys, check our weekly market review for deeper analysis of what happened, because this is a case for the forex textbooks.