Who Pushed Our EUR/USD Signal Off the Fence? - Forex News by FX Leaders

Who Pushed Our EUR/USD Signal Off the Fence?

Yesterday we decided to open a buy forex signal in EUR/USD. We opened a sell forex signal in GBP/USD before it which hit the take profit target after the USD buyers had their last feast, but the wave of the USD buying was over and the Euro was the best performing major currency against the Buck. We thought that the USD would make at least a retrace lower and the Euro would be the main beneficiary since EUR/USD was holding up pretty well, while the other majors had already lost about 50 pips.

But just when the other majors stopped the decline and looked like they were about to reverse, EUR/USD started its slide. It began as a slow move at first, losing only a handful of pips, but then the decline accelerated and soon we saw the price had reached 1.1150. 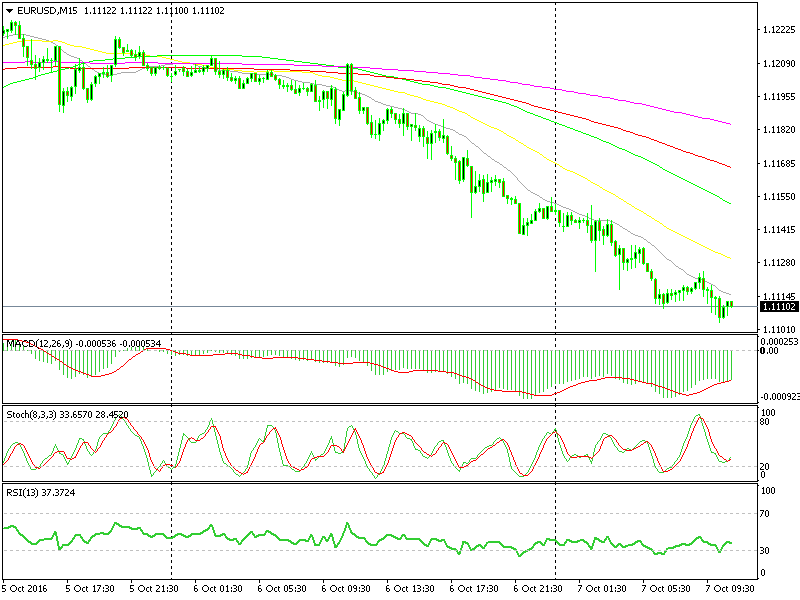 This move lower in EUR/USD looks like a swan dive

That felt weird because the other forex majors were not moving at all. I had a look around and I saw that the ECB talking heads were on a rant again. The EU officials had just finished the Brexit session before the ECB officials shifted the attention back home.

The ECB Constancio took his turn in the spotlight and straight away started talking about the ECB monetary policy. Remember on Wednesday when Bloomberg published an interview with an unnamed ECB official? Allegedly that person made a comment that the ECB will start to taper down the monthly assets purchase as part of the QE programme. The Euro shot more than 100 pips higher in about an hour.

Now Constancio went on denying everything. He said that the comments about a possible consensus on tapering are incorrect. According to him, there´s no foundation to these rumours and that the ECB will keep the QE programme ongoing until inflation is back on the right path.

I said a couple of days ago that the first comment from Bloomberg would be a game changer if it was correct. The forex market surely felt so as the Euro raced. But I also mentioned that all this seemed a bit dodgy, with the sudden shift in the monetary policy and the mysterious speaker.

On the other hand, it might as well have been true because the ECB is having trouble finding enough assets to buy to reach the monthly target. Now the ECB officials are out again denying those rumours. We don´t know what to believe now, the first comment of the denial? After all, you know the say in forex, it´s never true until they officially deny it.

Anyway, that sent EUR/USD 30 pips down, but our buy signal in this forex pair was still hanging on. In the evening it looked like the decline had stopped and the price was about to reverse. But the GBP had a moment of shock, which pulled the Euro another 20 pips lower an hour later so that was it for our signal. It took two events in forex to give us our first losing signal. By the way, we´ll take a look at what the hell happened with the GBP overnight.