We wrapped up September last week with some nice profit and entered this month with a positive attitude. We don´t know how this month will unfold, but having grabbed 186 pips from the forex market, we can say that we started off quite well.

This has been a pretty strange week, by the way. Do you remember last weekend when we posted the monthly review for September? The title of that article was “Plenty of Smoke but No Fire from Central Banks” because there was a lot of action from the big central banks of the globe but the action in the forex market was muted, to say the least.

This week, we can say that there was an even bigger bonfire in the market but no smoke. There were occasional comments from central bankers, but the market mostly ignored them and followed its own path. The GBP was the star of the week… too bad it was a shooting/falling star. It lost nearly 8% of its value in a couple of minutes but it recuperated most of its losses the same day. Still, the support level is now broken, which will open the gates of hell for the Pound Sterling.

The GBP might not go down the pothole tomorrow, but step-by-step it´s getting closer. Carney and Company must love this, because it takes care of inflation for the BOE (Bank of England), besides making British products cheaper for the rest of the world.

The Euro also had its 5 minutes of glory on the back of some speculation on Bloomberg. At last, we saw some positive data from the large economies of the world in the same week. That´s a rare surprise nowadays, but could this be the turning point for the global economy? 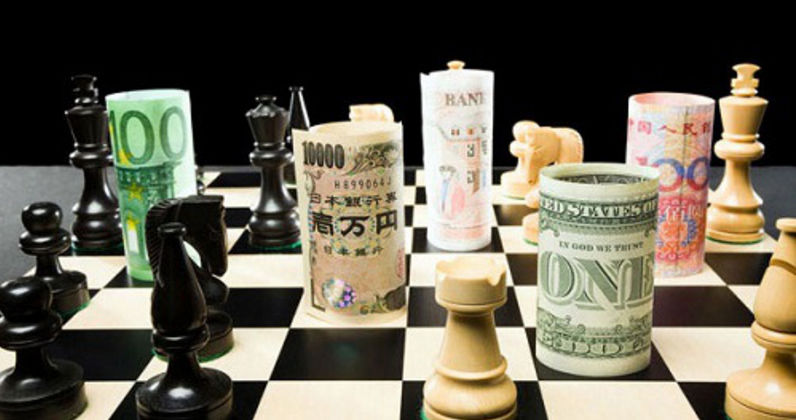 Politics is the best way to win a currency war

We already settled to the new market conditions in September and last month´s results further illustrate this tale. Yet, we always strive for the best, that´s why we pledged to improve our performance further this month if you remember.

As far as the first week of trading goes, we can say that we have already improved since we made 186 pips, which is nearly half the profit we made in September. We must not be too confident, though; being overconfident is the biggest mistake a forex trader could make in this business.

That said, we had a nice run of four consecutive days without a losing a forex signal. We tried to push our luck further, hoping to make it a week without a single losing signal, but it wasn´t meant to be. Some events, such as the flash crash of the quid (GBP) on early Friday morning took its toll on us, but we still managed to bounce back that day during the afternoon. By the way, we have had perfect weeks before when all our forex signals were closed in profit – so we know it can be done!

All in all, the forex market behaved itself this week besides a couple of mishaps in Euro and GBP pairs – which we overcame without much hassle. Too bad we didn´t open a long-term USD/JPY buy forex signal on Monday when this pair was around the 101 level. Nonetheless, we issued 14 short-term signals this week worth 1186 pips.

Although we couldn´t make it to 100% win/loss ratio, an 87:13 ratio is pretty respectable. Since the GBP was under negative market sentiment, we thought it would be best to stick to sell signals only in this forex pair. We might have missed some good opportunities here due to immense volatility, but with 75 pips, this pair made the largest contribution to our profit this week.

During the week, when I followed the forex market and analyzed the events I usually thought, “where the heck will I  start the weekly review?”. But as the week comes to an end, all the noise caused by minor events dissipates and what´s left is the events which have or might have a real impact on the market. From a trader´s perspective, this is a positive thing as your memory eliminates the unnecessary noise which distracts you from the real market movers, thus making trading less complicated.

On Tuesday and Wednesday, I personally wrote two posts about the negative feelings towards the Pound. The market sentiment that the GBP was going through was horrible; the UK construction numbers beat the expectations, the service sector data posted a huge jump and manufacturing were surprisingly good, yet, the quid totally ignored them. And what doesn´t go up will eventually go down.

It wasn´t too long before it happened. Some market analysts blame the French PM Hollande for being the catalyst of all this. He made a few comments about Brexit but the market was already agitated and the GBP was on the edge of the cliff.

Maybe Holland pushed the quid off the cliff, but the roots lay somewhere else:

After a few months of uncertainty, the market has come to terms now with Brexit. It finally accepted that it is inevitable and it´s coming soon. Even worse, hearing May recently and Hollande over the weekend, I think that those guys are heading for a hard Brexit.

Adding to that the negative sentiment, the break of the 1.26 support level on Friday during the Asian session was unpleasant – was when the liquidity is extremely thin and the snowball started. Then, the stop losses got triggered, one thing led to another and this turned into an avalanche. GBP/USD reached 1.1841 in my trading platform but the extent of the move is not clear yet.

The Yen has seen great demand this year, but the 100 support level has held the ground, despite a few quick dips below. A couple of weeks ago, the market was expecting the BOJ to show us a huge package. But the Japanese are not renowned for huge packages, it´s quite the opposite. They only promised to follow the Yield curve. Judging from the 300 pip climb this week, I can say that this is one of those times when the market satisfies with whatever it can get its hands on.

Finally, the jump in the Euro. According to Bloomberg, some ECB guy decided to walk up to them and tell the world that the ECB members agreed to start reducing the asset purchase (tapering) before the QE (quantitative easing) program ends. All this sounded dodgy to me because it came out of nowhere and the ECB official preferred to remain anonymous, which isn´t the right way if you want to get a clear message to the markets. The ECB president Draghi has already denied it.

On the other hand, the ECB has been having trouble finding enough assets to buy, thus reducing the monthly purchases would give them an easy way out. Besides that, the Eurozone economy has been picking up in the recent months, and so this might as well be a signal from the ECB for their next steps in the coming months. The market seemed to have preferred the second option because the Euro jumped more than 100 pips soon after the comments.

This was a promising week regarding the economic data. We have seen some positive numbers from most of the globe, so it looks like the efforts of the central banks are starting to pay off. It´s still a bit early to say that the global economy has left behind all the trouble, but we finally had a week where the largest economies showed some correlating positive data.

Particularly, the UK and the US reserved some surprises for us. The British manufacturing sector PMI jumped to 55.4 points, the construction got back above 50 after three months of contraction, and the services sector beat expectations as well.

In the US, the average earnings came out 0.1% above the expectations, which I hope will translate into more spending and higher retail sales. The factory orders picked up again this month and manufacturing started expanding again. But most importantly, the non-manufacturing posted a huge jump from 51.4 to 57.1.

In Europe, the manufacturing numbers and the industrial production crawled higher once again and the factory orders jumped up quite nicely. But the service sector still has some way left to go, especially in France and Italy.

Since the GBP fell off a cliff this week breaking all the support levels, we thought it´d better off to start with GBP/USD.  As you can see from the daily forex chart below for this pair, the 1.28 and the 1.2850 support levels will likely turn into resistance now that they have been broken. 1.30 will obviously be a big level to overcome, but with the volatility, we have seen lately anything can happen, so 1.31 will be the next level to watch because the 50 moving average (MA) in yellow is hanging around there. As for support levels, I can´t find any technical indicator nearby, even in the monthly forex chart. So, the .50 and 00 levels (1.2200, 1.2250 etc) are the best support this pair offers right now. 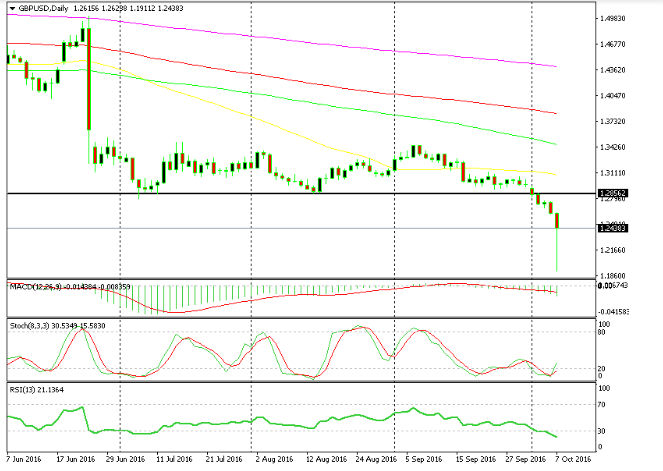 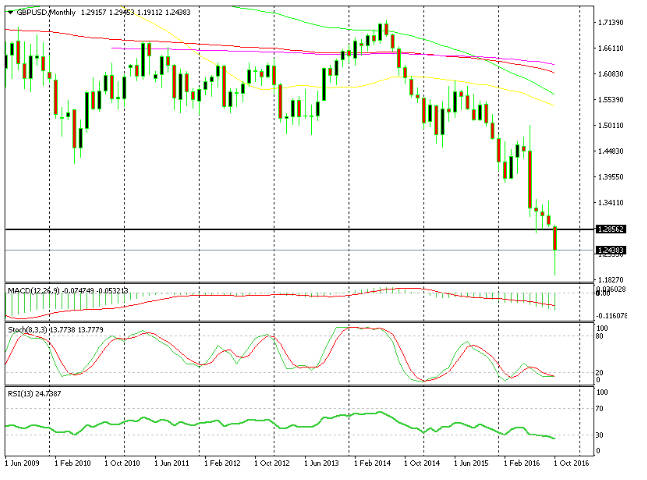 If you´re looking for support, you won´t find it – even on the monthly chart

The Euro is at the lowest levels against the USD in about 15 years, and the steep decline of the British Pound in the last year has underpinned this shift. When the GBP tumbled on Friday morning, EUR/GBP spiked 700 pips higher according to my ETX platform. It doesn´t look right because the moves in this forex pair are usually 30-40% smaller than the moves in GBP/USD when the Euro or the GBP are static.  In this case, the move in GBP/USD was 700 pips on my platform, while the Euro remained still. In this case, the move in EUR/GBP would be around 400-500 pips, but thin liquidity skewed the forex charts that day. As we said above, many different pairs had different lows for the GBP.

Anyway, during that spike EUR/GBP reached the 0.9530s. Looking at decades of chart history, that´s pretty close to the highest price ever, which was at 0.9802 in December 2008 after the global financial crisis. This paints a pretty clear picture of the direction that this forex pair is headed. On the hourly chart, the 20 and the 50 MAs have been providing support the entire week. So, we´ll consider opening short-term buy forex signals against these MAs next week. 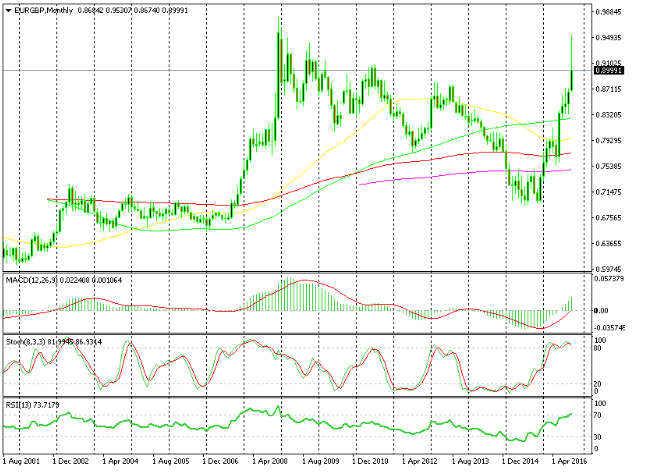 EUR/GBP is heading for parity 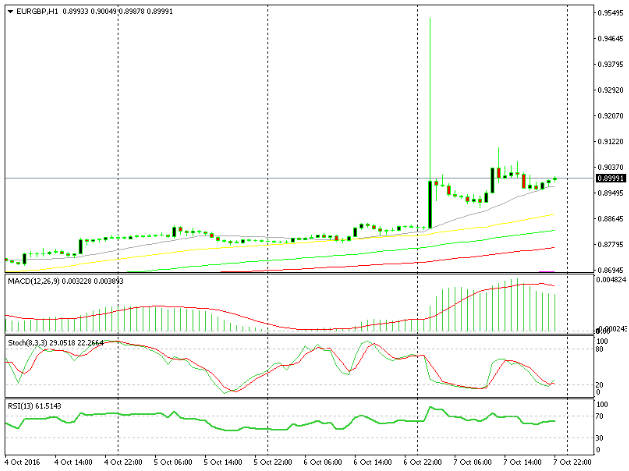 This was another successful week for us. We couldn´t spot a good opportunity for a long-term signal, besides USD/JPY on Monday, which we hesitated to grab. Nonetheless, we made 186 pips from the short-term signals alone. As for the 700 pip tumble in GBP/USD, no one could predict that move, so we´re not beating ourselves up about that.

As for next week, there´s not much on the economic agenda apart from a few sporadic events. The FOMC meeting minutes are to be released on Wednesday but I don´t think they will offer enough food for the market because they´re already outdated. All that matters for the forex market is the tight schedule for Friday, and if the market sentiment changes, it will be then.

Skerdian Meta // Lead Analyst
Skerdian Meta Lead Analyst. Skerdian is a professional Forex trader and a market analyst. He has been actively engaged in market analysis for the past 11 years. Before becoming our head analyst, Skerdian served as a trader and market analyst in Saxo Bank's local branch, Aksioner. Skerdian specialized in experimenting with developing models and hands-on trading. Skerdian has a masters degree in finance and investment.
Related Articles
Crude Oil Extends its Overnight Winning Streak - All Eyes on EIA Data!
During Wednesday's Asian trading hours, the WTI crude oil extended its gaining streak and edged higher towards above mid-$52. However, the b
2 hours ago