Europe has gone through a difficult period since the 2008 global financial crisis (GFC). I mean economically, because politically the EU project is a never ending story which will always have its kinks and crisis. The situation hasn´t been as bad as in Japan where we have seen a prolonged stagnation since the 90s.

But, compared to the US and the UK which bounced back relatively quickly from the GFC, the Eurozone economy is yet to see a sustainable rebound. That´s the reason that the ECB has undertaken such a massive monetary easing programme in the last two years, worth more than 1.5 billion Euros.

In the last few months though, we have seen the European economic data getting better and it´s spread across all sectors. Of course, there are always going to be difficulties in certain sectors or certain countries, EU is a conglomerate of large and diverse economies, but in general the economic situation has started to improve.

There´s yet a long way to go before the EU economy gets to the post-GFC stage where the US is right now, or where the UK was before the Brexit referendum. Still, this might be the big turnaround for the Eurozone.

If this is the case, then be prepared for a shift in the market sentiment. The sentiment has been extremely negative for the Euro since Draghi announced the monetary easing programme in May 2014, but if we see more positive economic data then the sentiment will improve dramatically.

One of the main reasons for this is the fact that the ECB will start tightening the monetary policy. We already received a signal last week from that unnamed ECB official. Draghi denied those comments, but that 100 pip jump in the Euro served to show us how quickly the forex market can change its sentiment towards the Euro.

Now, imagine Draghi announcing a shift in the monetary policy. The market would go mental and the Euro would start a long term uptrend. 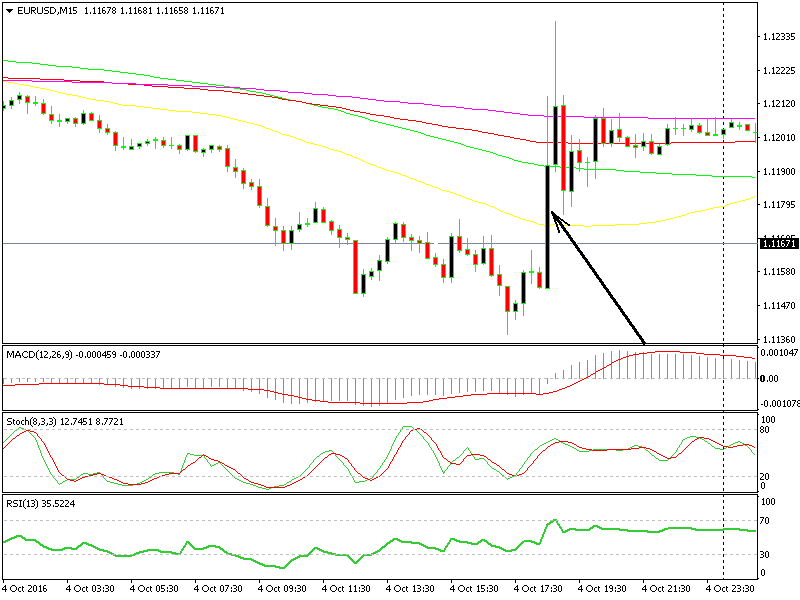 What can you make of a 100 pip jump due to speculation?

So, what´s the difference between the negative and the positive sentiment in the Euro? Only a few months of positive economic data. I am already observing the sentiment, which is not as negative as it used to be a few months ago. We will keep you updated though, because this would be a major event if the market sentiment will shift from negative to positive.

US Dollar Eases, Gives Back Almost All Gains of the Week as Sentiment Improves
2 weeks ago