Last Friday, the USD tumbled for around 100 pips after the US employment report was released. I don´t really know why the market took that report the way it did, because according to me that was a positive report. Anyway, the USD got back on its feet yesterday so that was just a moment of panic or a misunderstanding at best. Anyway, these are the driving forces in forex after all, so we must not ignore them.

The uptrend of the buck stalled last night but it resumed early in the morning from what I can see from the charts. As I type, EUR/USD is creeping closer to the 1.11 support level, which is a two-month low for this forex pair. I´m not sure whether to go long at this level because it´s been a one-way traffic in the last two days without many bumps on the road. I´ll just wait for the ZEW economic sentiment to be released first before pulling the trigger on this pair.

We did open a sell forex signal in USD/CAD a minute ago, but the reasons there lie within the oil prices, rather than the currencies. As my colleague Eric pointed out last night, the oil prices have been on a rise since the OPEC countries agreed to cut the production by 700 million barrels/day and as we know, the CAD is a prime beneficiary of higher oil prices. 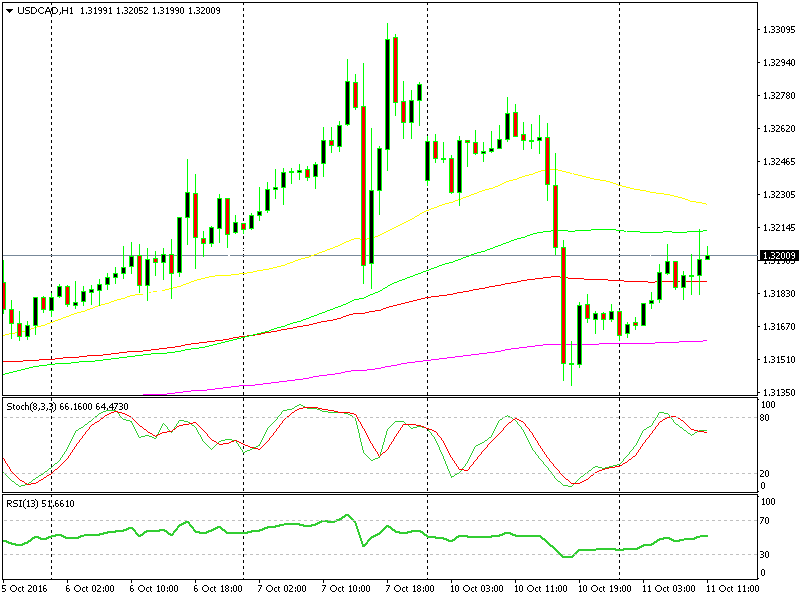 Hopefully, the 100 moving average in green provides enough resistance to push the price down

USD/CAD has moved around 80 pips higher overnight amid USD strength, but that´s just a retrace for this forex pair. The stochastic indicator is already overbought on the H1 forex chart and the price is just below the 100 moving average. I think three reasons, one fundamental and two technical, are more than enough to pull the trigger. I know guys (used to know) who have pulled the trigger for a lot less.

All we have to do now is wait and see how our trade plan for USD/CAD will unfold. By the way, be ready because the EUR/USD trade might be just around the corner guys.