Finallly EUR/USD Craks the Nut at 1.10

Ok, here I am back again guys after experiencing a few technical problems. Just had a quick browsing through forex charts and the one that took my attention was EUR/USD. At last, after three months the price broke below the 1.10 support level. 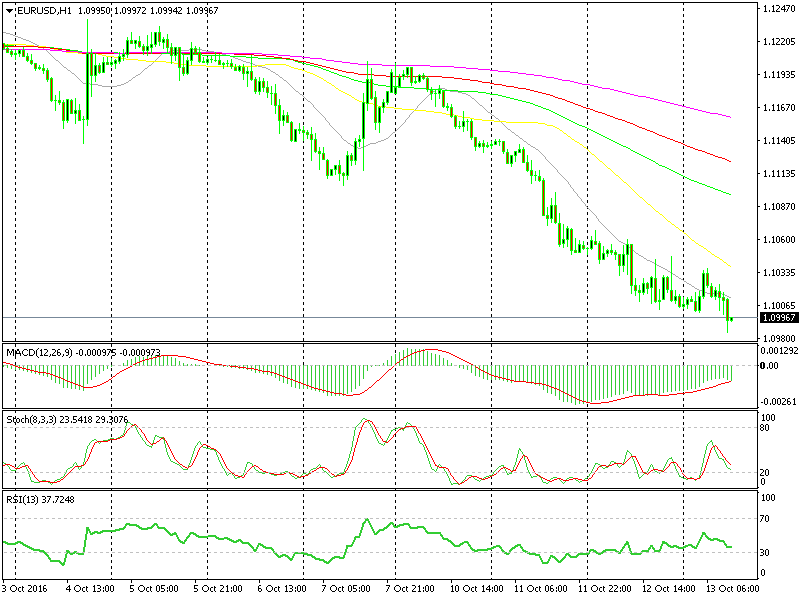 It´s not the break of the century because the price has to close well below it for the day, but it´s a break nonetheless and in my opinion, this makes the picture pretty bearish for this pair. We can see a swan dive on the H1 and H4 forex charts. For those who don´t know what that is, that´s a chart pattern where the price starts diving slowly, but then pick up pace breaking support after support level. The price started to slip down on Monday morning and since then it hasn´t looked back.

But, the most bearish picture for me is painted on the weekly and monthly charts. If you look at these charts,  you can see a period of consolidation between 1.10 and 1.13 in the last 2-3 months. In the last four months, the price closed almost where it started the month in this forex pair, but this month/week´s candle is a big bearish one. I know it´s too early to tell because we´re not even half way through October yet, but the weekly candle is almost over and I don´t think the price can recuperate the losses until tomorrow.

I would prefer going long on the Euro against the Aussie or the Kiwi. But for now, the market sentiment towards the Euro remains bearish, so let´s take one step at the time and concentrate on EUR/USD. Remember the next support levels in this pair? We highlighted them yesterday in one of our updates; they came at 1.0950, 1.09 and 1.08.

Can EUR/USD Fall Back to Parity After Failing at 1.05?
22 hours ago

Is 1.05 the Top for EUR/USD After Getting Rejected on China Unrest?
2 days ago