The BOE Just Gave Us A Handful of Pips

Less than two hours ago we posted the first market update today about the busy day ahead where we mentioned that two central banks have speeches scheduled today, if you had a chance to read it. The guys at the BOE (Bank of England) have already started part their wisdom on us.

The MPC Shafik popped up an hour ago, saying that "the benefits of the stimulus package in August are bigger that the negatives". Hhmmm, It hardly was a package apart from the rate cut, which will take time to filter through the real economy, if it ever does.

Carney took his turn just moments later in the neighboring county of Nottinghamshire. He said that even though the level of the GBP is not included in the mandate of the BOE, they´re not indifferent to it.

Are we supposed to believe this?

They must love the lower Pound. While the other central banks are breaking their backs trying to weaken their currencies without much success (BOJ springs to mind), the BOE folks are enjoying the benefits of the weaker Pound with their feet up the table. Higher inflation is one of the immediate benefits and in the latest UK inflation report, the numbers ticked higher. I think that the BOE will take that, thank you very much.

Speaking of inflation, Carney said that they will tolerate some inflation overshoot. No s**t Sherlock, we all wish the market did all the work for us. That´s supposed to be bullish for the GBP and a 100 pip jump in GBP pairs followed those comments, but the market is not buying it because the rally stalled and the price is slipping lower as I type. 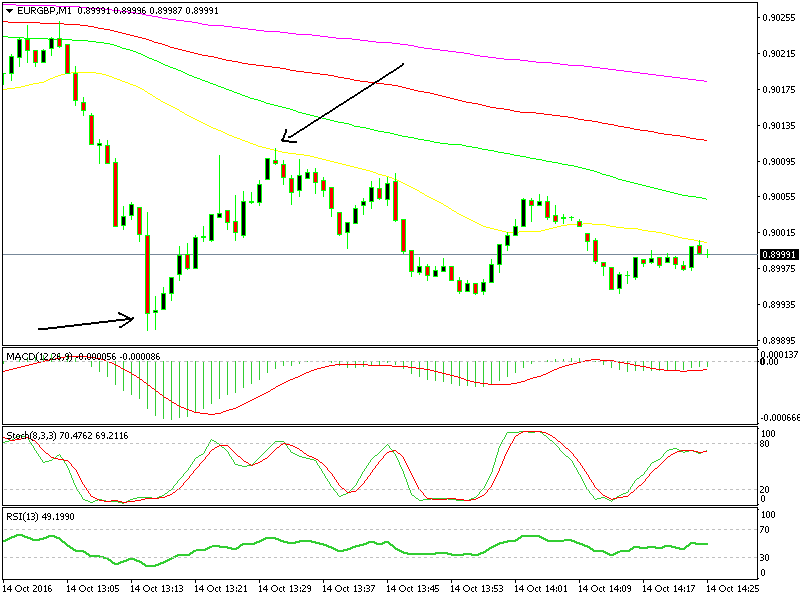 Our buy forex signal was spot on with perfect timing

At least, Carney presented us with a good opportunity to sell this GBP rally for a handful of pips. We thought that it would be best to buy EUR/GBP because the risk is more limited here than in other GBP pairs. We opened a buy forex signal when the price formed a doji on the 1-minute forex chart, which reached our take profit target exactly to the pip. Thank you, Carney and Co.