Following our last market update, the UK employment figures got released about an hour ago and they were pretty much what the market had expected. We mentioned there that we weren´t expecting anything particularly terrible or great. The recent UK economic data has been quite stable recently, so why would anyone expect either fireworks or the apocalypse?

The earnings excluding bonuses moved higher, but the report in general showed that the UK economy is holding up pretty well. This was the risk for GBP shorts/sellers before the event; the numbers would be just ok, which tells us that the economy is doing ok, which in itself means that the nothing catastrophic is happening after the Brexit vote. The market could have taken this the way the forex market usually does and take the GBP for a ride above the clouds.

But, as we said in our previous update, the price in GBP/USD moved 50 pips higher before the release. How can you interpret that without looking at our update?

To me, that was "pricing in" in the process; the market was expecting positive figures, so the sellers closed their positions, hence the move higher. As we say in forex, the market priced in the positive data. 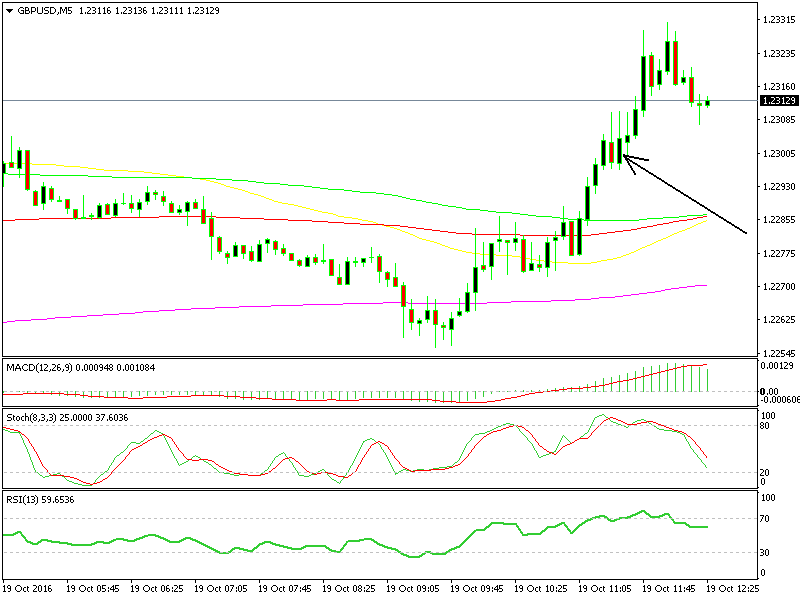 The employment report couldn´t lure the bulls in, and the price got stuck around 1.2310-20 for about 15-20 minutes

So, when the numbers were published and the GBP pairs froze up for about 15 minutes, we came to the conclusion that the market was done with the pricing. Besides that, there was no excitement from this report, which means that the southbound train would start rolling again in GBP/USD. That´s the reason we opened the sell signal in this forex pair.

If you noticed, the price jumped about 15 pips after we opened that forex signal but that came from the other side of the moon, the USD side. A wave of USD selling across the board sent the GBP/USD higher, but once that was over, the train turned on the engines. We got our 23 pip profit from that forex signal, so the analysis seems to have worked. We hope you followed that signal as well.