I don´t know the reason but whoever might have noticed, the British Prime Minister May has embraced the hard Brexit policy recently. She was on the remain (anti.Brexit) camp before the referendum, so it seems pretty strange that she´s taking the hardline of the extreme far right wing UKIP.

It felt strange even when she took the post of the Prime Minister in the first place, since she was a "remainer". The "Brexiters" among the Tories surely have been putting pressure on her, but I think the main reason is her concept of Brexit, where a leaving vote equals alienating UK customs from the rest of Europe and closing of all borders for free travel for the EU citizens. 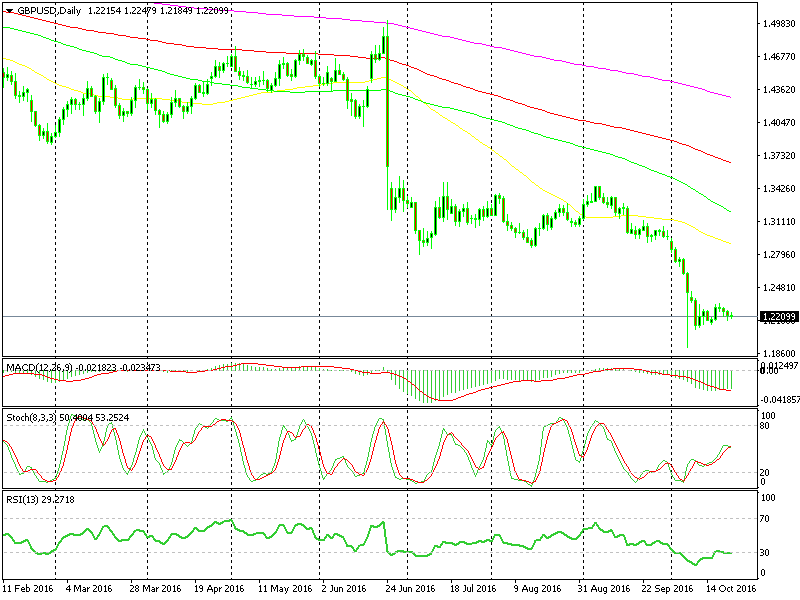 After 2nd GBP crash, the odds for a third one are much higher

I think that´s how she perceived Brexit subconsciously. But I think that the recent developments have forced her to rethink her position. Even the hard "Brexiters" seem to have ducked. The GBP/USD chart above is one of the reasons. Many forex analysts might have thought that the first GBP crash was just a one off as the first wave of panic after the referendum. But the second crash tells us another story; this is far from over, probably barely the beginning, the talks with the EU haven´t started yet.

Another reason is the growing fear among the financial sector in the City in London. Some big banks have already planned to freeze hiring in London or even cut jobs. Some big names from France, Germany, Ireland and Spain have already visited the City, trying to persuade financial firms in the UK to move to Europe. Ireland has a reputation for sucking in financial firms as a mild safe haven.

The growing rhetoric from the EU leaders, which are only a response to the initial reaction of the hard "Brexiters" has done some damage too, but the opposition from inside the island is filling up the glass quickly. Scotland´s first minister threatened another independence referendum if the will of the Scots is not represented. She said that "she is not prepared to see Scotland being driven off a hard Brexit cliff edge". Scotland voted largely to remain within the union if you recall, so Scottish independence is a real threat to the UK if another referendum is to take place.

Taking all these reasons into consideration and adding some more which will come up along the way and you inevitably have no room left to maneuver. She seems to have backed down in the last few days; the parliament is being included in the EU/UK negotiating process as well, although the chances for a leave/remain vote are very slim. A couple of hours ago May commented "that there is no suggestion that Britain is heading for a hard Brexit".

That´s one of few comments from her with some common sense in it. A hard Brexit would be destructive for Britain according to me, so taking the first step in the right direction is a good start, as always better late than never.

GBP/USD Slips Under 50 EMA - Buy Now Above $1.2125?
12 hours ago
Can GBP/USD Keep the Bullish Momentum Going As It Pushes Above the 200 Daily SMA?
GBP/USD has been really bullish since the reversal at the end of September, gaining 20 cents, but can it continue much further?
2 days ago