Hello again FXML followers, I hope you´re having a relaxing weekend so you can come back next week fully charged for more excitement in this  world. Did you guys made it to the end of the week safe and sound? We had a few ups and downs, but managed to close the week flat, which still keeps us in a good position for the finish at the end of the month.

If we were to pick the most important forex-related event this week, the ECB (European Central Bank) meeting and its president Draghi´s speech would be it. The master of disguise came, had what he had to say and left. However, he left the forex market right where it was before he started his show, puzzled and guessing the next step the ECB is going to take. Uncertainty is never good for a currency, so the Euro had to endure another disastrous round this week.

If we were to pick the strangest event, the EU/Canada trade deal talks were abandoned (it´s not over yet) after the small region of Wallonia in Belgium refused the terms of agreement. If we were to pick the funniest speech, the king of charisma that is the BOJ (Bank of Japan) governor Kuroda, completed the forex series this week with the comedy called “Inflation Daydreaming in Japan”. The Brexit process provided the market with enough gossip this week and will continue to do so for a long time, but we´ll talk further about this and the other events in this weekly review. 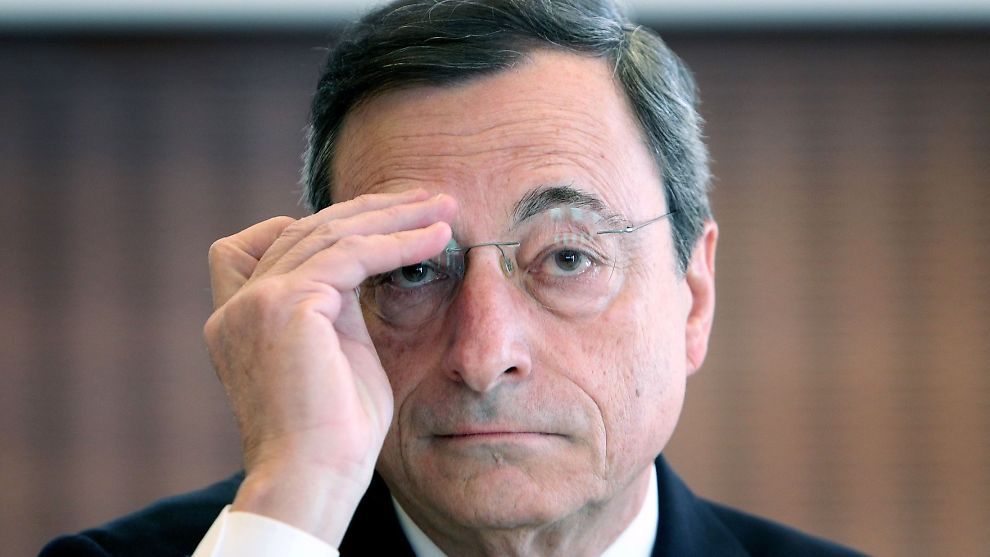 Our next step? Read my face

Leaving the Euro aside, the market this week has been quite indecisive. If you see the see the charts of most forex majors, the price ended the week close to the opening levels. It´s easy to get whipsawed when the market is undecided – and we did have a rough start at the beginning of the week.

The jump in the New Zealand inflation numbers didn´t make things easier for us, since we had an open sell forex signal in this forex pair. We got to terms with this sort of price action and rearranged our trading strategy for the week. The new strategy proved to be successful and we recuperated the losses at the start of the week.

We closed the week flat, but having had two great weeks previously, we stand at more than 300 pips for the month so far. With the negative sentiment surrounding the Euro in the last few weeks, we thought it would be safe to stick to Euro shorts. So, we opened three sell forex signals in EUR/USD out of the 12 we issued this week. All three of them closed in profit. Perhaps we should have opened more signals in this forex pair instead of EUR/GBP, which was quite volatile due to the GBP situation.

We also couldn´t spot a good opportunity to open a forex signal this week. We have been looking for chart setups for a few weeks now, in order to issue a long-term forex signal, but the price in most major pairs hasn´t touched important support/resistance levels where we can rely on for such signals.

The Euro jumped on Thursday when Draghi started speaking, but the price during that jump was right in the middle of nowhere, so we couldn´t do anything, otherwise the risk would be too big and we don´t want to risk half our account in a single trade. Consistency is more important that a couple of great trades if we want to keep working in the forex industry. Now, if the price in EUR/USD would jump to 1.14-15 then the risk/reward ratio would be very evocative; we could risk 200 pips for a possible 500-600 pip return. The same goes for USD/JPY. Anyway, we closed the week at breakeven with a win/loss ratio of 67:33, so let´s consider this as a neutral week and look forward to increasing our monthly profit in the six remaining days.

The ECB meeting was of course the biggest event in forex this week, but the inflation numbers from around the globe took the attention first. The inflation seems to be holding up well all over the world, so all hail the higher oil prices (particularly the central banks). They have done so much in the recent years to get the inflation where they want it and they have repeatedly failed. Now comes the oil and everything falls in place, having taken a burden off their shoulders.

The BOJ governor Kuroda got overexcited from the global inflation numbers, too. It´s just a shame he hasn´t looked at the domestic inflation figures. As you might have read in one of our market updates, he decided to remain calm when inflation overshoots above 2%. Isn´t he such a cheeky chap? How about targeting 0.2% before trying to reach for the stars?

Another funny occurrence was the rejection of the EU/Canada trade agreement by Wallonia in Belgium. The decision making process in the EU has its own flaws since all member countries and their regions have to approve any major agreements before it goes through, but it is cringe-worthy when you hear Brexiters pointing at this as one of the main reason the Brits voted out of the union.

Anyway, the Draghster was the star of the week. We covered this event in one of our updates on Thursday. Some unnamed source from the ECB planted this idea in the market´s head that the ECB might start tapering soon, meaning that the 80-90 billion Euros a month worth of asset purchases will start decreasing soon. So, once Draghi mentioned that the ECB hasn´t discussed the extension the market got excited because it assumed that tapering was coming.

But Draghi made a list of the things they didn´t discuss at the meeting and down went the Euro. These are Draghi´s comments which we posted on Thursday´s update:

– We didn´t discuss extending the QE programme beyond March 2017

– There´s no scarcity of assets to buy for the QE programme, but if there will be in the future the ECB discussed the ways to overcome it

– The ECB hasn´t noticed any signs of bubbles

– We didn´t discuss the planned horizon of the programme

I guess Draghi wanted to keep the market guessing on their the next step and give himself another several weeks of spare time before making a decision. So, what are we left with? In my opinion, the 1.6 billion Euro QE programme will definitely run its course until March next year and it will be extended further ahead, but the size of the extension is unclear. We have to wait for more hints in the coming weeks to see how far the ECB will go, but once the tapering comments reach the official side of the ECB, then that will be the time to buy the Euro.

The inflation data was the most important economic release this week, since it painted a picture of the inflation expectations in a global context. I have to say that the inflation has been picking up slowly in the recent months, and this week´s numbers reinforced that view.

The inflation in the EU remained stable, which is not great but considering a few months ago when deflation was on the doorstep, a 0.8% inflation number looks pretty good. The inflation in the British Isles posted some really impressive figures, but the producer inflation remained flat, which makes you wonder where is the inflation coming from if not from the weaker pound or the higher oil prices, which should have been reflected on the import prices that producers pay.

The US core CPI (Consumer Price Index) missed expectations but ticked 1 point higher nonetheless, while the New Zealand inflation numbers surprising the market in a positive way. The only disappointment was the Canadian inflation which remained flat. Perhaps the Canadians are using their own petrol…

I think that it´s time we had another look at USD/CAD because the 50 moving average (MA) in yellow on the weekly chart has finally been broken. This is a major development because the 50 MA has been like a black cat for the buyers in this forex pair; every time the price reached this MA the sellers loomed and the price tumbled 400-500 pips lower. Not this time though, the price broke the 50 MA this week and the weekly candle even closed above it. On top of that, if you switch to the weekly forex chart you can see that a 1-year long resistance level has been breached as well. This is a very bullish sign considering that oil prices are a lot higher now, because that means that the CAD can´t find its right footing despite higher oil prices. Adding the fact that the 20 MA on the monthly chart has providing solid support in the last five months and the picture in this forex pair becomes extremely bullish. 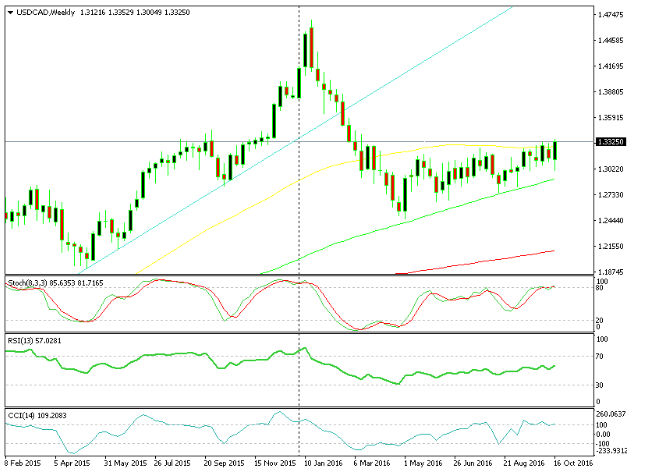 The 50 MA has now been broken 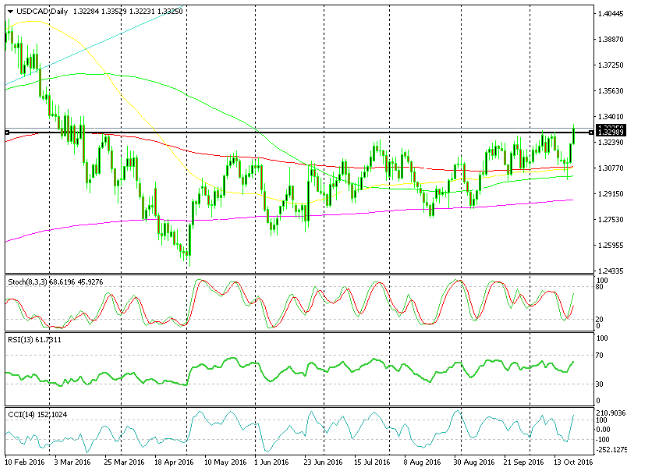 Even the 1 year resistance level is now history

We did analyze EUR/USD last week, but there have been more developments in this pair this week and the bearish picture has developed further, so I think we should take another look at it. As you can see on the H4 forex chart, the 20 MA in grey has slapped the price down every time they met each other in the last two weeks. That shows how strong the downtrend has been in the last couple of weeks, because you know, the smaller the moving average in play the stronger the trend. The one time the price jumped above the 20 MA, the 50 MA came into play and took its turn to smash it down yet again. On the weekly chart, the price is heading down to 1.08 after breaking the 1.09 support level, but the worrying thing for the bears here is that the stochastic indicator is sort of oversold. 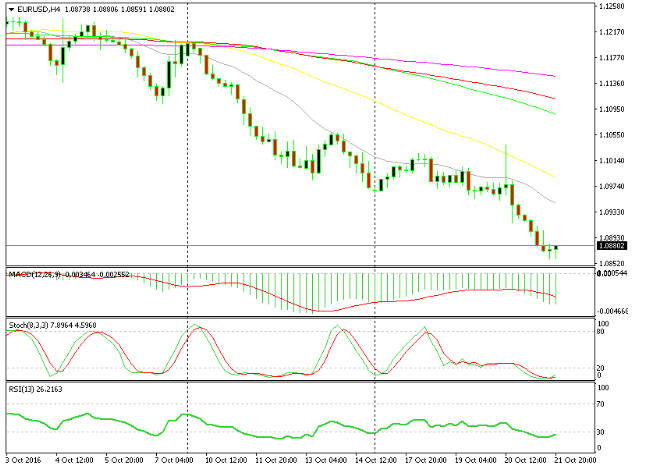 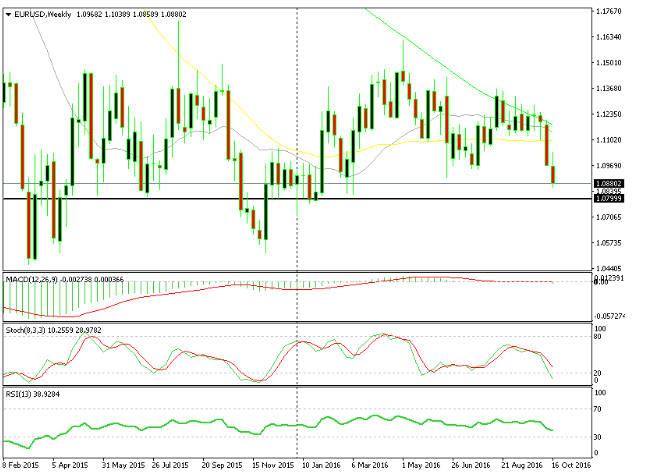 The price is heading down towards 1.08 but stochastic is already oversold

So, Draghi left us guessing for another week at what policy the ECB will follow next. The market built up expectations for a tapering process after such comments from an unnamed ECB official a couple of weeks ago, but super Mario didn´t feel confident enough this to disclose his plan this time.

Next week, the economic data will be light with only a few important releases here and there. By the way, Draghi is making an appearance on Tuesday, so maybe he will give us a few hints then. We will be here commenting and analyzing every major event in forex, so make sure to check our live market updates during the week.

Will USD/CAD Turn Bullish After BOC Signals A Pause?
11 hours ago

Forex Signals Brief for January 25: Can a 25bps BOC Hike Keep the CAD Bullish?
2 days ago