Following this morning´s update where we talked about how the EU economic data has improved recently, we will expand a bit further on the market sentiment shift in the long term. The short term market sentiment might turn instantly in forex, but the long term sentiment takes months and years to change. That goes in favour of us forex traders, because usually there are many signs and indicators where we can base our forex analysis and foresee this shift.

That was the case with the Euro about two years ago and that seems to be the case now. The European economy was facing great difficulties after the 2008 GFC (global financial crises); the recovery was very weak and Greece faced collapse which was then followed by Grexit. Despite this, the Euro was gaining ground against most major currencies. At the time, I felt that the uptrend in the Euro pairs was just artificial and an epic reverse was soon to follow.

The market sentiment seemed to be turning negative because the EUR/USD buyers were unwilling to push above 1.40 and the attempts to push higher were getting weaker and weaker. Besides that, the disappointing data was mounting up while the US and UK economic data was quite impressive.

So, all these negative ongoings for the Euro didn´t fit well with the advances in the Euro pairs and reason tells you that soon the coin will flip and the uptrend would be over, all that is needed is a catalyst to get the doves flying.

Draghi was the catalyst, the dove of doves. It took only a few comments in his legendary conference to get the snowball rolling, which later turned into an avalanche and the Euro fell more than 35 cents top to bottom. But as we said, the signs had been flashing for a few years prior to that. 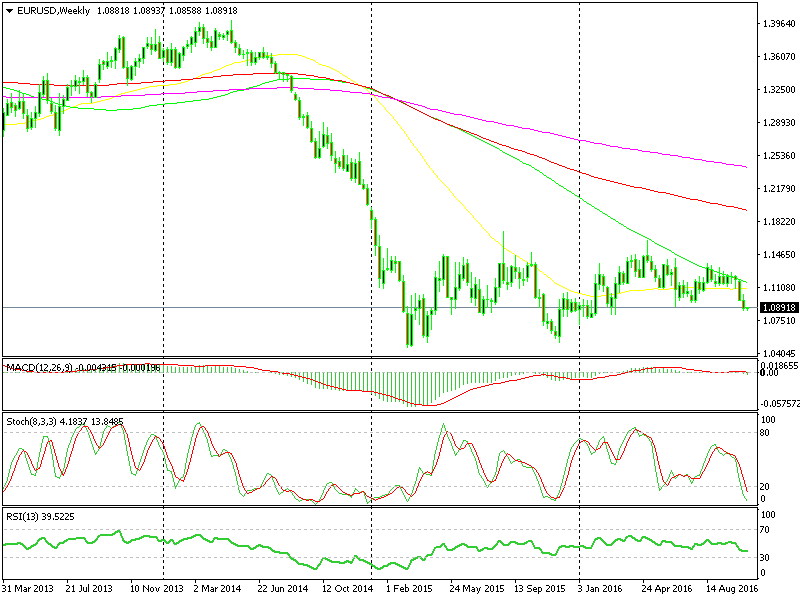 The epic fall of the Euro came as no surprise; the signs were there

Now the Euro is getting at the end of this downward cycle and the first signs of this are appearing. It´s still a bit soon to get to that reversing point, but we must be prepared for what´s to come in the coming months/years, so we don´t let the tide hit us in the face.

Imagine if EUR/USD jumps to 1.15-16 in the next several weeks; you´d think that this would be a great idea, right? It would be if the market sentiment was still bearish for the Euro, but if the cycle has ended and the tide has turned, then we might see 1.20, 1.25, 1.30 and higher in no time, so that would be it for your account, unless you can afford to lose thousands of pips in just one bad trade.

That´s the reason we try to anticipate these shifts on a macro level for a certain currency. As I said, the Euro is getting close to the end of this pattern, but we´ll analyze this in a more practical way in the next market update.

To be continued soon.