A 2 Point Jump in the GDP Is Worth… Nothing

Rule Britannia! The British Isles shall never surrender or fall into recession. That´s what the UK finance minister sounds like in my head right now after the UK Q3 GDP growth wasn´t slashed in half. I think Hammond was just waiting behind the curtains because it didn´t take him more than a few seconds to pop up on the screen and declare victory over the world.

I guess the UK government needs some good public relations right now. He said that the British economy is resilient, the fundamentals are strong, and that the UK will start negotiations with the EU from a position of strength.

To me, he sounds like a kindergarten boy who has just won a football game and now he thinks he can take on the world. Calm down Hammond; the Brexit process hasn´t started yet. Yeah, sure there was a glitch after the referendum when the businesses panicked, but that only lasted a couple of weeks and things turned back to normal. That´s why I wasn´t very convinced by the 0.3% GDP forecast. The 0.5% GDP growth seems more like it. The UK economy has shown some signs of weakness here, but nothing that drastic to slash the GDP in half, so this number seems spot on.

That said, apart from the service sector which grew by 0.8% in Q3, the construction, agriculture and production declined sharply. But aside from construction, these sectors make up for only a small portion of the economy, so they are balanced and exceeded by the UK service sector.

Taking a look at the GBP pairs, particularly GBP/USD, the whole thing looks like a setup to blow our open signal off. GBP/USD jumped to 1.2270 only to hit the stop loss and then turn back down where it started. So, the GDP numbers coming out 2 points higher mean basically nothing for the Pound. 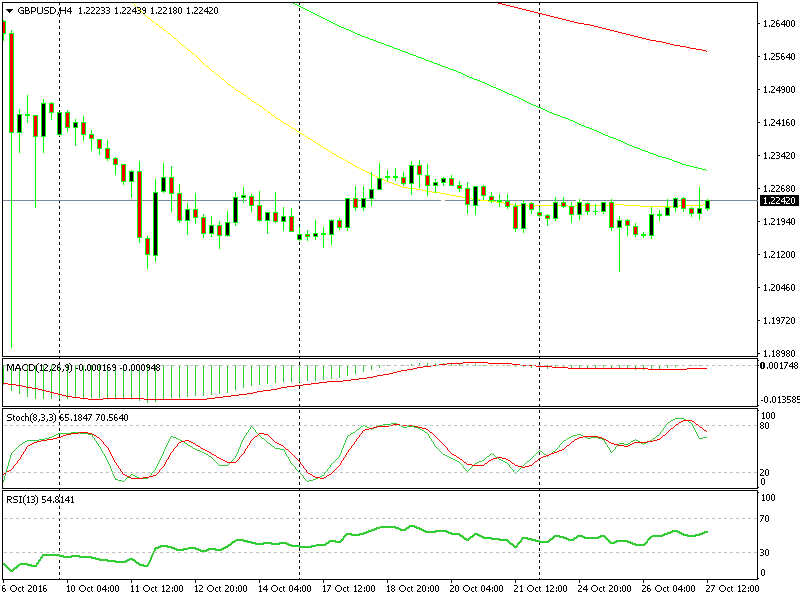 Honestly, I had a feeling that the GDP would beat the expectations, but GBP/USD didn´t react strongly enough to meet our trading plan. As I said in the previous update, the ideal level to sell this forex pair is around 1.2600-50, but this pathetic 50 pip up-and-down move shows how bearish/negative the market sentiment towards the GBP is. You just can´t get a retrace which is deep enough to offer some good risk/reward ratio. If this is all the GBP can get out of such numbers, then be prepared for a massive tumble if some disappointing UK data comes up.

Buying Gold Today, As the Pressure Remains Bullish
19 mins ago

Forex Signals Brief for September 29: US and Canada GDP Expected to Contract
6 hours ago