US Manufacturing Can’t Help the Buck

We opened two forex signals a while ago; one sell signal in EUR/USD and one buy signal in USD/JPY. The main reason for these forex signals was the oversold USD level. The Buck has enjoyed good demand against most major currencies last week and yesterday as well, but today the USD has been on the back foot, making a retracement after several days of gains.

So, we thought that the retrace would be over a couple of hours ago and the best thing to do was to buy the Buck as the uptrend resumed. Besides that, the price in EUR/USD was just below the support level at 1.1050, where it continues to hang around and the price in USD/JPY was just above the 100 moving average on the H1 forex chart.

About 15 minutes after we opened these two forex signals, the ISM US manufacturing PMI, IBD/TIPP economic optimism and data was released. On the face of it, the reports were pretty upbeat. The economic optimism was expected to come out below the 50 level, which means negative sentiment, but it came out at 51.4. The manufacturing sector also beat the expectations and is moving further away from the breakeven level.

I was pretty damn happy when the numbers came out and the Buck jumped a few pips immediately after the release, but that was it. Those headline numbers couldn´t bring an end to this USD retrace. Nothing seems to go your way when you need it the most. Those signals are still safe and sound for now but the reverse we were hoping for it´s taking time and when a trade setup takes too long to unfold in the right direction it usually ends up as a worthless setup. 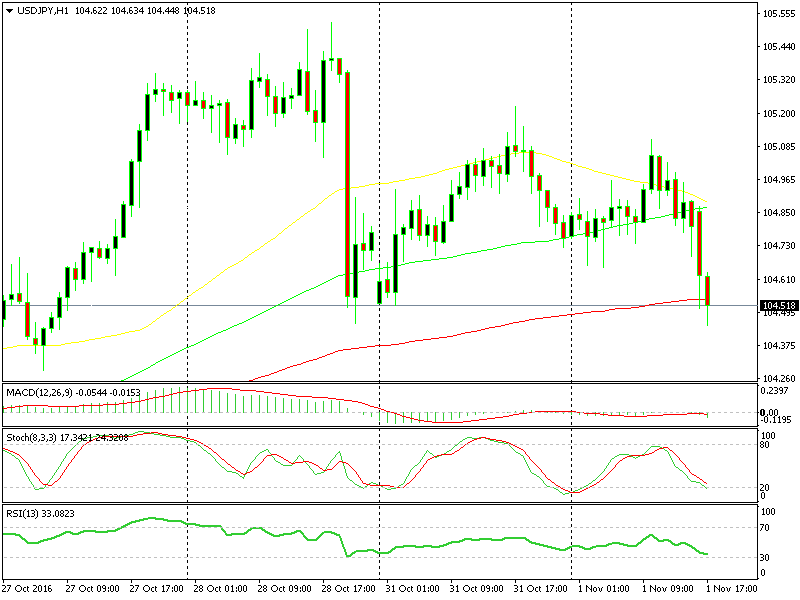 Will this oversold chart setup work out for us?

Having said that, there were some catches and weaknesses in the US data too. The employment in the US manufacturing grew strongly and so did the prices paid, which means higher inflation. But, the inventories fell which means that companies in the US are cutting down on extensive spending and the construction spending declined by 0.4% as well.

Now, inventories and construction spending make up for a considerable portion of the GDP, so the US Q3 GDP is likely to be revised down from the 2.9% growth we saw last Friday. This is not good news, but the positive aspects of the data outweighed the negative ones so it is frustrating to see the USD not taking advantage of that.

Mind you, today is the first day of November and international cash flows might be to blame for these, although they´re not as large as during the month-end flows. By the way, the dairy prices rose by 11.4%. Guess what, the Kiwi couldn´t take advantage of the higher prices either, go figure.