When the Chinese Do What the Aussies Are Supposed To

On Friday last week, we opened a short term sell forex signal in AUD/USD. It was live all day yesterday so you might have noticed it. The reason we decided to take that trade was because this forex pair has been in a downtrend in the H1 forex chart for the last four days and when we decided to take it, the price was just below the 100 and 200 moving averages.

Besides that, the stochastic indicator was overbought on the same timeframe chart, which meant that the retrace up was over and the price would probably resume the downtrend.

I checked the economic calendar last night before going to bed to see if there was any event which might ruin the trade setup. As I said, it was a good setup, but the RBA (Royal Bank of Australia) had their meeting scheduled for this morning at around 4:30 GMT. I knew the RBA meeting was coming when I opened that forex signal on Friday, but I thought two days would be more than enough for the trade to run its course before the RBA came. 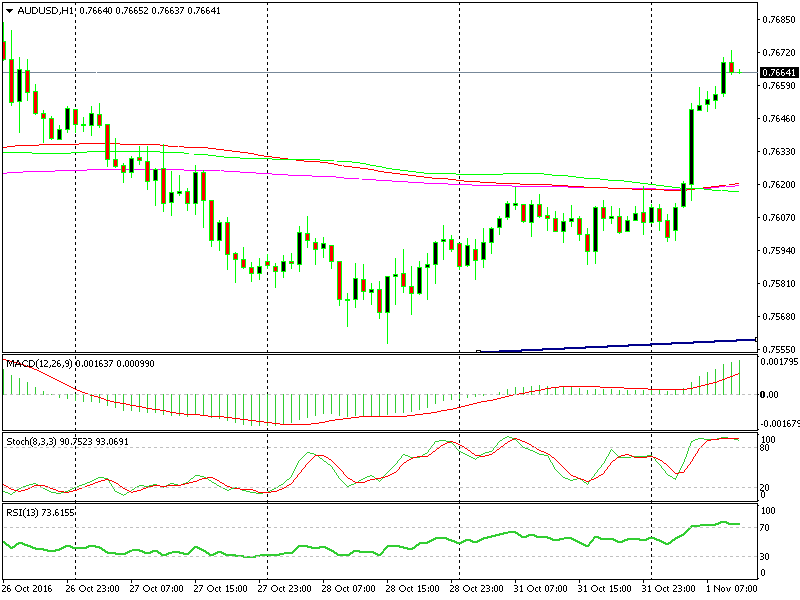 Sometimes fundamentals can throw a good trade setup to the rubbish bin.

Well, I woke up this morning and saw AUD/USD about 80 pips higher. You'd think that the RBA would have hinted the forex market that a change in the monetary policy was coming, but no. The move in this forex pair came from China.

As we know, the Australian economy is very dependent on exports of raw materials and commodities to China, so when the Chinese economy is doing okay, the Australian economy follows suit and vice versa. Last night, the Chinese manufacturing and non-manufacturing data was scheduled for release, so that was my biggest fear in regard to the open AUD/USD signal.

I woke up this morning to find out that the price was about 80 pips higher, but the RBA had made no surprise decisions or comments. So, right away I thought it must be the fault of the Chinese and it was indeed. The manufacturing sector data showed a nice pickup in activity.

If you remember, the Chinese manufacturing sector has been in contraction for most of this year, but in the last few months, things have started moving in the right direction and this jump finally put a lid on those troubled times.

So, the Aussie had jumped on the Chinese data overnight and our signal got smoked. This is the nature of forex. You must watch out from every direction because you never know where it is coming from. Anyway, the day is long and we´ll have plenty of opportunities to make up for that forex signal.

Skerdian Meta // Lead Analyst
Skerdian Meta Lead Analyst. Skerdian is a professional Forex trader and a market analyst. He has been actively engaged in market analysis for the past 11 years. Before becoming our head analyst, Skerdian served as a trader and market analyst in Saxo Bank's local branch, Aksioner. Skerdian specialized in experimenting with developing models and hands-on trading. Skerdian has a masters degree in finance and investment.
Related Articles
Weekly Outlook, Jan 25 - 29, 2021: Top Economic Events to Watch This Week
The broad-based U.S. dollar is going to end this week on the bearish track as traders continue to cheer the Joe Biden administration's inaug
7 hours ago

GBP/USD Heading Lower into Sell Zone - Do We Have a Sell Trade?
1 day ago