Are Europeans Fighting to Keep the UK In or Split the Booty? - Forex News by FX Leaders

Are Europeans Fighting to Keep the UK In or Split the Booty?

The Brexit theme has been one of the main subjects in the forex world since June and it will continue to do so for years to come. However, it´s been pretty quiet in the last few days. I love some Brexit chatter, so I have missed all the threats and counter threats from all sides.

Don´t worry though, it will never be more than a few days before a talking head pops up and spits their guts over it. The chairman of the German Council of Economic Experts Schmidt and the Irish prime minister Kenny are here to take care of it.

Kenny popped up a while ago saying that the odds are high for the Brexit talks to get vicious. You might consider this as an attempt to bury it in the heads of the Brexit camp that the EU will do whatever it takes to keep the UK in, even if it has to do the bad cop routine. Alternatively, you could see this as a threat to the UK and a message to the financial firms located in the Citi which contribute to the British economy more than the whole Irish economy is worth to move to the next island. We know that Ireland has a reputation for luring financial and IT firms from Europe and the US as a tax heaven.

The German chairman of the economic wizards was more straight forward. He said that it´s worth it for the EU to put up a fight to keep Britain in. Try telling that to some thick skulls in the Island mate, who refuse to look at it in an objective way even though it´s the Britons who have the most to lose. 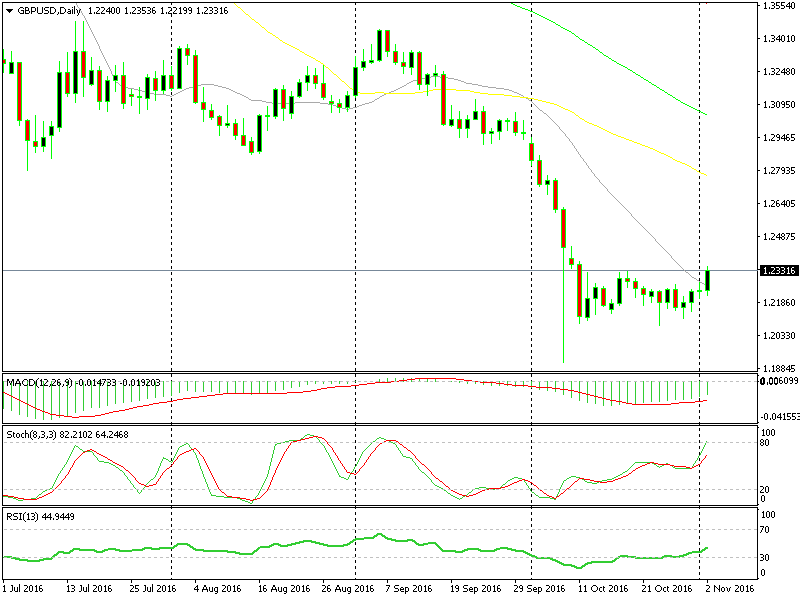 The stochastic indicator is already overbought, but I´d prefer a better price before going in

Meanwhile, GBP/USD keeps marching on higher reaching 1.2355 minutes ago. Although, that´s due to the USD bashing that´s been going on for the last several trading sessions. I´m feeling itchy to open a long-term sell forex signal here, but I´ll just wait a little longer for a better entry price. We´ll be back with a thorough GBP/USD analysis though so stay tuned.