At the bottom left corner of my forex platform, I usually keep a EUR/CHF chart open so I can see the risk sentiment in the forex market and sometimes place trades as well on this forex pair. If this pair dives, then one thing is for sure: the risk aversion is strong because, although the Euro has recently turned into a safe haven currency somehow, the Swiss Franc is the ultimate safe haven, the coffers in the safe haven fortress.

So, I was looking at the top bottom of my trading platform and saw an 80 pips jump. I instinctually thought that maybe the risk aversion of the last two days is over now that the Swissy is giving up. But no, it was the USD/CAD chart that had eclipsed the USD/CHF chart. 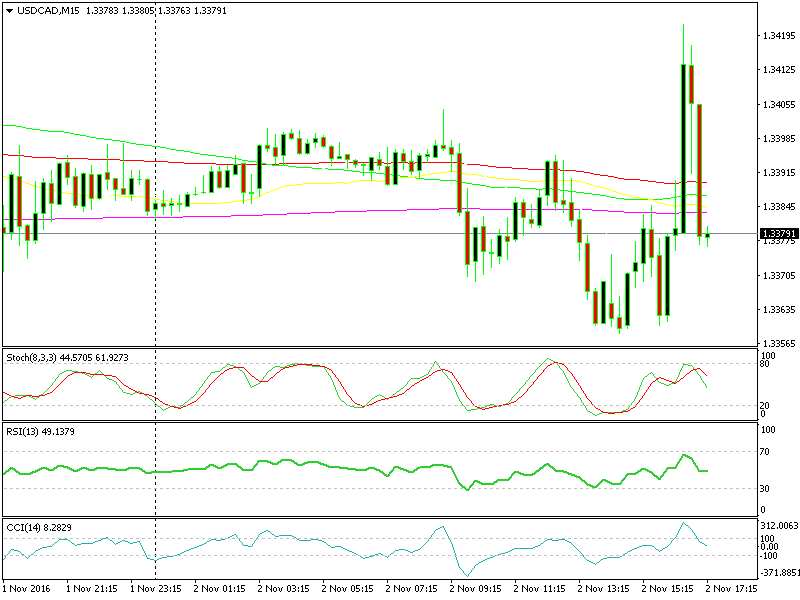 That´s quite a lot and it surely won´t help oil prices, which have been declining about 7 cents in the last two weeks. Oil dropped another 1.5 cents top to bottom after the data was released and the Canadian Dollar followed suit. USD/CAD jumped about 80 pips higher after the release, but it is sliding down as I type likely due to the negative market sentiment towards the Buck. The USD just can´t get a break.

However, this is not good news for the Loonie (USD/CAD). Now the market sentiment is terribly bearish towards the USD but when all this ends, which will happen in less than a week unless Trump wins the US elections, then the CAD will be in trouble and this forex pair will likely reach 1.40 in no time.