The German Machine… Not So Mean - Forex News by FX Leaders

The German Machine… Not So Mean

There aren't many important economic data releases today. Even if there were, the market is totally focused on one thing and there is only one thing in the mind of forex trades right now: the US presidential elections. That said, the economic data might not move the market now because of the elephant in the room, but once this is all over, the attention will turn to the economy and to the next central bank's step.

So the economic releases of the last week or so might not have had an impact on the market, but don´t let that fool you. It will set the tone in the forex market when the market gets back to trading economics instead of politics, which might come as early as tomorrow evening when most of the presidential results come in.

For instance, the US employment report last Friday was pretty good, but it wasn´t enough to overshadow the politics. As a result, the market ignored it for the time being, though the FED has taken notice of it and so has the forex market. The pickup in wages has been weak during this economic recovery, which the FED has often highlighted, so the jump we saw on Friday is a big plus for the FED´s monetary tightening policy.

This was the case this morning with the German factory orders. The monthly orders declined by 0.6% when they were expected to grow by 0.2% from the previous months. That´s just the tip of the iceberg because last month´s numbers were revised down and so was the annualized sales. 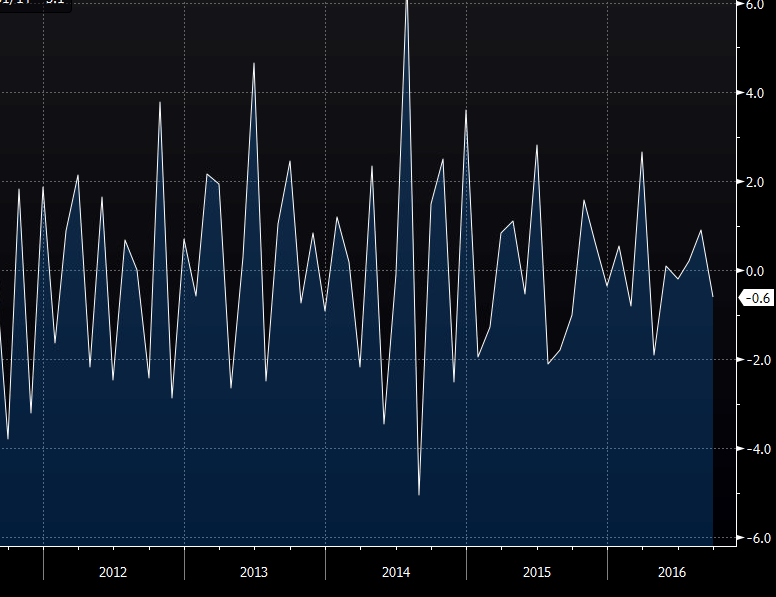 This was the case this morning with the German factory orders. The monthly orders declined by 0.6% when they were expected to grow by 0.2% from the previous months. That´s just the tip of the iceberg because last month´s numbers were revised down and so was the annualized sales.

We have seen some decent numbers from the Eurozone recently and the ECB (European Central Bank) president, Draghi, didn't waste a minute to take all the credit for it. Now we see a hiccup in the German factory orders. This might be just a one off and this data is pretty volatile, as we can see from the chart above, but it might be the second sign that the Eurozone economy is not out of the woods yet. Last week's miss in the final EU services PMI was the first signal.

The German GDP third quarter must be revised up according to rumours around the market, but today´s factory orders might put an end to those rumours. We still have to wait for this month´s economic data from the Eurozone in order to see a bigger picture of the economy. Only after several weeks can we say whether the Eurozone economy has really left behind the rough times or the better data we have seen in the last two months was just a seasonal thing.