Where Is the USD Headed One Day Before the US Elections? - Forex News by FX Leaders

Where Is the USD Headed One Day Before the US Elections?

One more day to go until the big day.  Americans hold their general elections on Tuesday for some superstition reason, even though they consider Tuesday as bad luck. Whatever the reason, we better get ready because whichever side the USD takes, it will be worth a few hundred pips in the coming days/sessions.

So what do we know so far?

We know that the Buck doesn't like Trump and that last week, the USD lost about three cents as Trump advanced, closing the difference with Clinton to just a few percentage points.

We also know that now Hillary is clear of all charges after the FBI closed the email investigation yesterday and Trump has nowhere to cling on. The USD is loving this and it looks like last week was a bad dream.

I was planning a trading strategy yesterday on how to trade the USD in the last two days before the elections, as well as after the elections. The FBI's news yesterday sort of threw this strategy off course, but the main theme remains the same. The USD, the commodity currencies, and the neighboring ones suffer when Trump advances, while the safe haven currencies and the Euro suffer when Clinton takes the lead.

I was hoping for some more drama until tomorrow, which would send the Buck further down after last week´s decline. We then would buy the USD against the JPY and the CHF just before the first results were published, with the idea that Clinton would win. But, the FBI ruined it for us.

The polls show that Clinton is now in a much better position, so the chances of her becoming the next US president are immense comparing to trump. The Washington Post has Clinton ahead at 47% with trump trailing her at 43%. We still think that a long term USD/CHF buy forex signal is a good trade idea. USD/JPY has already taken off, which doesn't offer a good risk/reward ratio. The perfect stop loss would be below 100, but the price in this pair is in the 104.40-50 region as I type, so I´m not willing to risk 500 pips. 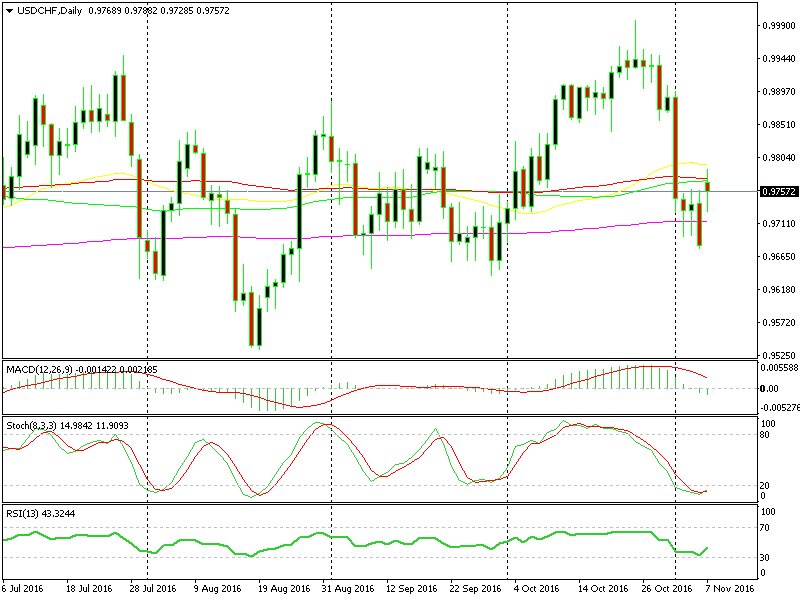 Wish we had taken the USD/CHF long trade on Friday

Buying the CAD and the Mexican Peso is another good trading idea, unless Trump surprises everyone. However, that´s a very unlikely scenario now, so selling the safe haven currencies is the reasonable trade. That said, there´s not much time left for any more nasty surprises, so we must decide pretty soon. We already have the EUIR/USD long term sell forex signal open and we´re getting ready to open a USD/CHF buy signal. So, if you hear our website ping, then it´s most likely that signal going live.