Yesterday in the evening, the RBNZ (Royal Bank of New Zealand) cut the interest rates by 25 bps (basis points), from 2% to 1.75%. Even after this latest cut, the RBNZ holds the highest rates among the G8 group of the major currencies in the developed economies.

Of course, this came as a result of the US presidential elections and Trump´s victory. To me, that´s an overreaction to the latest global political events (Brexit and Trump), or at the very least, a premature action. Nothing extraordinary is happening in the market right now to suggest a rate hike and there will be another couple of months until Trump enters the Oval Office.

Nevertheless, they cut the interest rates at 8 pm GMT. The funny thing was that the NZD jumped about 100 pips higher right after the cut. That felt strange because usually the home currency loses 100-200 pips when the central bank cuts the interest rates. So, why did the Kiwi jump?

Well, immediately after the cut, the attention in the forex market shifted from that rate cut to the next one. That´s how forex works. Once something is past us, whatever is on the calendar in the near future becomes the next trade.

So, the market came to the conclusion that this was it from the RBNZ regarding rate cuts. So why not buy NZD/USD immediately since there is no other rate cut in sight? After all, better late than never. That´s what the market did, and that´s the reason the Kiwi jumped 100 pips higher. The RBNZ governor Wheeler reinforced these beliefs during his press conference a few minutes later, so there you go. 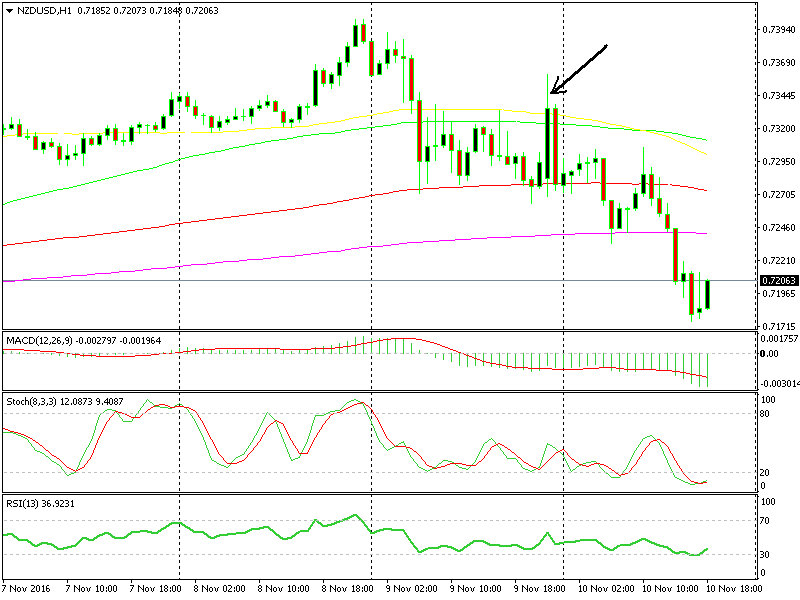 NZD/USD jumped 100 pips last night, but it has lost double that amount since then

But as you can see from the chart above, that move reversed the following hour. Wheeler did say that the interest rates should stay around these levels until 2019, but he also highlighted that there are many uncertainties and they might need to adjust the rates according to global events.

This morning, the Kiwi and the Aussie were the strongest currencies, so that´s the reason we decided to open the NZD/USD forex signal. Well, these two bad guys turned from zero to hero this afternoon for no apparent reason I can think of and our signal got smoked.