Trump Won, Why Is the Buck Surging? - Forex News by FX Leaders

Trump Won, Why Is the Buck Surging?

Last week, when the FBI re-opened Clintons email case, the USD suffered a lot. It lost more than two cents during those days. The general idea before the US presidential elections was that the Dollar would plunge if Trump won because that´s what happened during the campaign; the Dollar suffered whenever Trump advanced.

A possible Trump victory would take the US to a new uncharted path, both economically and politically, so it would bring many uncertainties. That was the consensus among financial analysts. Three days after the election, the USD is several pips higher against all the major currencies except the GBP, but that´s another story and we will cover that too in a while.

Most of the forex analysts are now shocked. The market caught everyone on the wrong foot. Just like the US voters three days ago and the UK ones in late June with Brexit, they caught the politics and the mainstream media on the wrong foot. 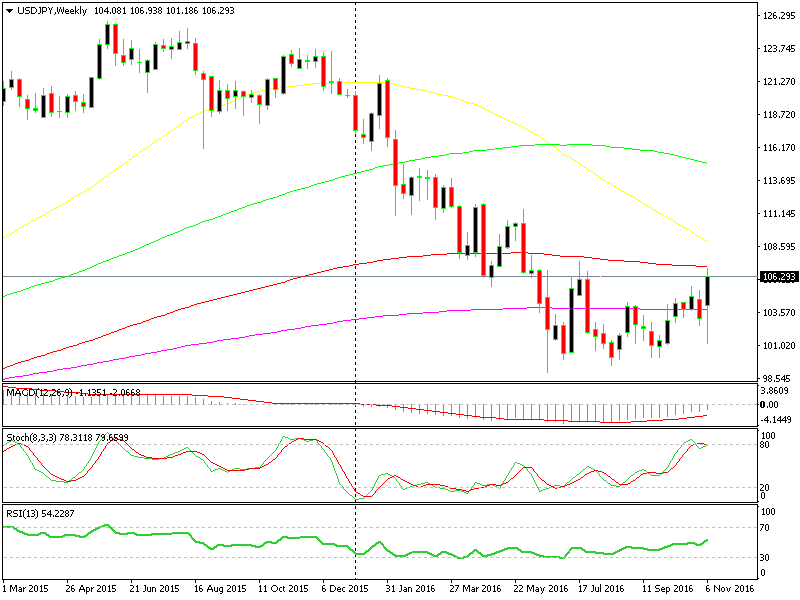 Such a reverse didn´t happen for no reason, did it?

So, why is the USD rallying?

First of all, the election uncertainties were over quite quickly. Before the elections, the market was sort of worried since any nasty surprises can occur during that day. The winner was obvious and there´s no appeal after this. That takes one risk factor away from the Dollar, which is positive.

Trump´s plan on the tax system is another plus for the Buck. He´s promised to cut taxes for most US citizens, small businesses, and large corporations. I guess he hopes to bring some large international corporations back to the US. Fewer taxes means more cash in everyone´s pockets, which will then flow into the economy and all the gears of the economic engine will run smoothly.

However, the biggest reason the Buck has been surging since the US elections is the fiscal plan. Trump has promised to increase the fiscal stimulus with large infrastructural programs. That helps the Dollar for two reasons: 1) a fiscal stimulus would help the US economy and consequently the USD, and 2) if the government increases fiscal stimulus, then the FED will obviously cut the monetary stimulus.

This last point is the mother of all in this latest market sentiment towards the USD. Only yesterday, FED´s member, Lacker, commented that a greater fiscal stimulus would imply higher interest rates. That´s exactly what the forex market has been thinking since trump won: more money flowing from the government so the FED has the luxury to be more miserly.

Many financial analysts were expecting 1-2 rate hikes from the FED next year. But if the fiscal plan is to start early next year, then we can see more rate hikes in my opinion. With more money going around from lower taxes and higher fiscal stimulus, the inflation will move higher, helped by higher oil prices as well. The US employment sector is as good as it gets, so if everything goes s planned, we might even see 3-4 rate hikes next year. That´s more than enough to send the USD several cents higher during these days, and probably a lot higher during the months to come.