Apart from the Japanese and the Chinese numbers we saw this morning, the economic data is non-existent. The only important forex event today is the speech from the ECB chairman Mario Draghi scheduled for 5 pm GMT.

But before that, his colleague Constancio is paving the road for Draghi. I guess he´s preparing us for his boss later on, so there won´t be any shocks in the forex market.

Constancio is saying that the global economy is facing uncertainties, which in my guess comes from Brexit and the new US president. It´s true there´s some degree of uncertainty in the financial markets, but after the US elections, it looks like the uncertainty is leaning on the positive side, otherwise we wouldn´t see the Buck surging several hundred cents against safe haven currencies of JPY and CHF in the last few days. 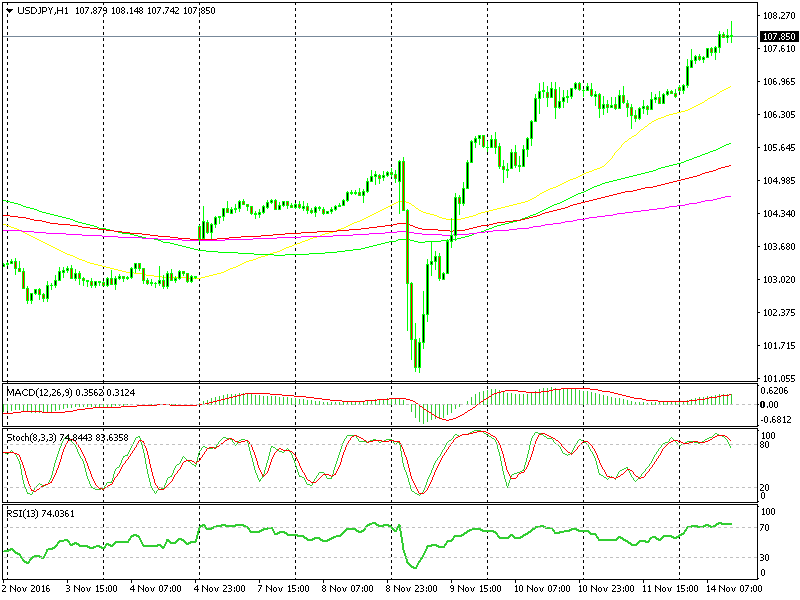 The market was unsure whether the global economy and the US economy, in particular, would continue the economic recovery. Now the general consensus among financial analysts is that the world economy has left behind last winter´s hardships and will continue its recovery. But the uncertainties now are on Trump´s fiscal plan and whether it will take the global and the US economy to the next stage.

He also said that last week the tide started to turn around in the financial markets, shifting from bonds to equities. Now, this is the clearest signal in forex that the sentiment has turned positive. When the sentiment is sour and the risk is high, the big investors run for safety, which bonds offer.

After all, loaning money is always safer than investing. Governments always pay their debt, of course, if we leave Greece and Argentina out. Oh yes, and some banana republics, besides dictatorships. But according to the textbooks, the bonds are much safer than equities. So, the risk appetite in the markets is clearly on and the ECB is acknowledging it, so let´s ride it guys.