US Inflation Takes the Wrong Turn, But Not the USD - Forex News by FX Leaders

US Inflation Takes the Wrong Turn, But Not the USD

The US producer inflation report (PPI and core PPI) was published a while ago but it wasn´t what the market was expecting or what the FED would have liked to see. Yesterday, the US retail sales posted a nice jump for October, but the increased demand for goods hasn't translated into higher prices.

To explain, the retail sales are goods that have been produced months ago, if not years.  The producer inflation report reflects the prices that the US producers have paid in October for raw material and other stale they will use for future production.

The headline PPI number stayed unchanged from the previous month, which is not a negative thing apart from it missing their expectations, but the core PPI number dived by 0.2%. The annualized PPI (producer price inflation) also missed the expectations but it remained stable nonetheless at 1.2%. 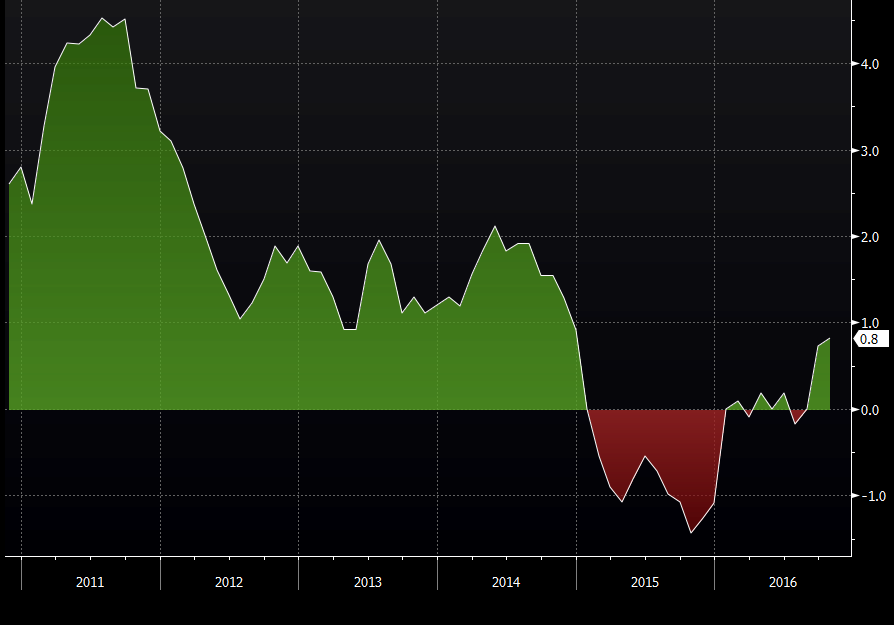 Slowly but surely, the inflation is edging higher

Looking at the details, there are plenty of minuses in the report, but the bigger picture doesn't look so bad.  The prices for final demand goods, normal goods, energy, and final demand construction all jumped higher in October. Besides services which became 0.4% cheaper, these are the sectors which make up for most of the US economy/consumption, so inflation in these components is positive.

The biggest drop which affected the main PPI number came from food. Food prices declined by 0.8% last month, which is a good thing for low income families and consequently for retail sales in the coming months. Maybe the autumn harvests have played a role in food prices.

Anyway, the USD seems hardly moved after a little shakeup, which probably came from profit taking. It opened the door for a trading opportunity for us; we just opened a buy forex signal in USD/JPY because we think that the intraday retrace might be over as the stochastic indicator is nearly oversold in the H1 forex chart. The 20 SMA is providing support and the 109 support level is just beneath the opening price. Fingers crossed and we´ll have the third winning forex signal today.

Is Gold Turning Bearish On Higher Interest Rates?
3 days ago