Regardless of your political preferences – whether you were for Drumpf or for Clinton – one thing is for sure, there´s a lot more confidence in the financial markets now and they have picked a side.

The English-speaking world (the UK and US at least) have had enough of the liberal philosophy in politics and they have decided to take the hardline. With general elections in numbers of EU countries next year, there´s a possibility that this might spill into Europe as well.

Nonetheless, things are a lot clearer now and the markets love a clear picture. The volatility decreases and the trend is evident. The USD uptrend started last week after an epic turnaround following the US elections and this week it turned into a broad USD buying spree.

Obviously, it is a lot more relaxing when you trade in a one-sided market. Our results speak for themselves; we only had one losing signal this week and the total profit was 253 pips.

One thing to notice this week was the break in the 110 level of USD/JPY. Remember that risk appetite and safe haven currencies don´t bode well together. If you want a more detailed analysis for this pair, then scroll down to see what´s been going on with this forex pair this week and what our projections for it are. 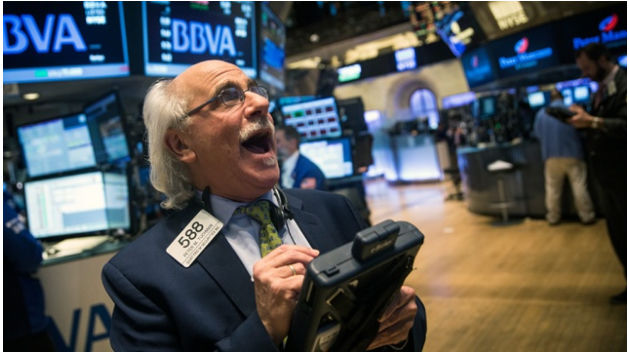 Every trader is happy when the trend is clear

Last week we opened two long-term forex signals; a EUR/USD sell signal and a USD/CHF buy signal. We closed the USD/CHF signal close to breakeven when the epic turnaround happened, but had we left it run its full course, it would be about 400 pips in profit now.

Nonetheless, we had a really great week. The moves in most forex pairs were substantial but the volatility decreased considerably, which limited the risk for forex traders. Besides that, trend this week was as obvious as it gets, so there are no excuses for those traders who might have closed the week in red, although as forex soldiers we solidarize with traders who have fallen in battlefield. 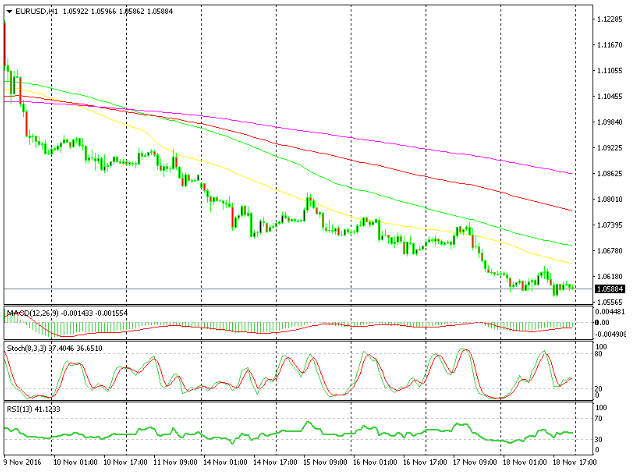 How can anyone pick the wrong direction in this trend?

I say no excuses because you can´t be wrong in such a trend. Look at the hourly EUR/USD chart, the forex market did half our job this week since it picked the direction for us; all we had to do was pick the entry spot.

We picked the correct entry spot in this forex pair three times this week when the price reached the 50 moving average in yellow and the stochastic indicator touched the overbought levels. With such a strong trend those signals couldn´t go wrong.

We also picked another nine good entry points this week for our forex signal, mainly in EUR/CHF, AUD/USD and NZD/USD, all of which inevitably ended up in profit. The chatter about oil production cuts negatively affected our USD/CAD signal on Tuesday, but it surely didn´t stop us from making a hefty 253 pip profit and closing the week with a great win/loss ratio of 92:8. As for this month´s results, we´re up more than 300 pips in profit so far with more than a week to go.

The US elections took place last Tuesday and we know they always are a very important event for the financial markets, particularly when an unconventional candidate like Drumpf is elected the president of the US. So, the forex market couldn´t be an exception.

The forex market continued to be in the post election mindset this week, and trading was all about the US election results. Once again the economic data and other forex events had no say in the forex market.

A number of central bank heads made their presence this week, but they couldn´t change the market sentiment. The market quickly digested Drumpf´s win, which was considered as positive for the Buck for a number of reasons that we highlighted last week, so this week the USD progress was relentless.

It was obvious from the first minute that the only way to trade forex this week was to pile on USD longs whenever given the chance. The first signal was the small gap in favour of the USD when the market opened on Monday morning.

Then, as the week progressed and the USD pairs kept breaking level after level, the USD bears threw the towel in. By the way, this is the second week the forex market opened with a gap, which according to textbooks must be closed during the first hours, trading sessions or days, but in such trading environments the textbooks go right into the rubbish bin.

All major currency pairs ended the week near the lows against the USD, so the sentiment for the Buck remains strongly bullish. The Japanese Yen has been the totally hammered in the last 10 trading days, but I´m sure the BOJ (Bank of Japan) must love it. Too bad we missed the chance to get in long on USD/JPY last week.

As mentioned above, the market disregarded the economic data and the central bankers again this week. The impressive jump in the Japanese GDP numbers only sent USD/JPY 200 about pips higher on Monday, when the opposite is supposed to happen, although the situation with the Yen is slightly different.

The ECB (European Central Bank) President Draghi and a number of other EU officials were active this week with their speeches and comments. We also got the ECB meeting minutes on Thursday and from my point of view, I can say that the ECB has taken a step back on the QE tapering. The ECB will be in a better position in December to decide about the future of the QE programme, they said, but with general elections in Germany, France and the Netherlands, I can´t see them taking decisive actions.

Leaving the US elections and the central bankers aside for a moment, we also saw some good numbers from the UK and US this week. The US and UK retail sales for October were very impressive, while the employment sector continued to be solid as the US unemployment claims fell to the lowest in 4 decades and the unemployment rate in the UK declined to 4.8%.

Looking at the USD/JPY H1 chart, you can´t argue about the strength of the uptrend. As you can see, out of all moving averages (MA), the smallest period MA was the one to offer all the action. The 50 MA in yellow held the uptrend intact a few times this week as it provided solid support during pullbacks. We know that when the higher timeframe MAs fail to meet the price, the trend is considered very strong, but we don´t need moving averages to tell us that. You can see the 1,000 pip northbound move top to bottom on the monthly candle. That´s a huge move considering the short period it took place and from the monthly chart we can see that there are no obstacles in the way until 1.16, which has been a strong support since 2014. That will be the level to watch, but if the Japanese economy continues to improve (albeit slowly), the fundamentals will go further in favour of the USD. 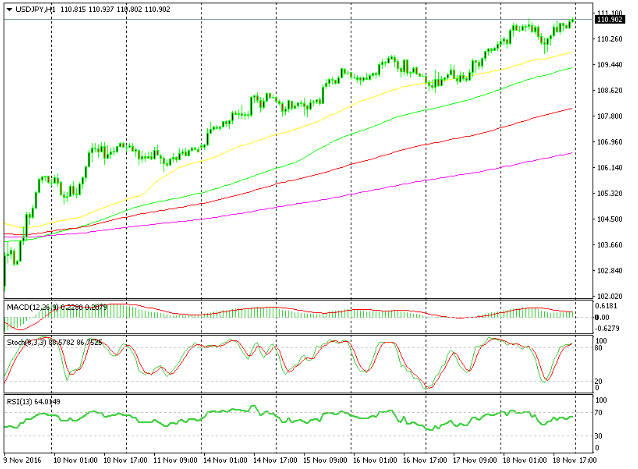 The 50 SMA has been the only useful MA this week 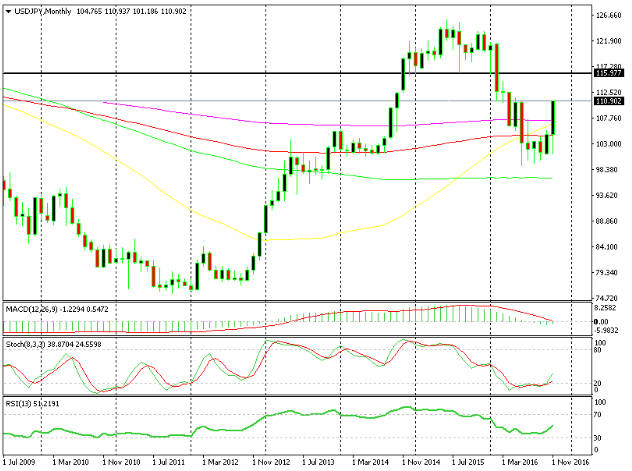 Similarly to USD/JPY, EUR/CHF has been prone to the smaller timeframe moving averages this week. The 50 and 100 MAS have provided resistance during the pullbacks, thus keeping the price headed down. If you want to grab a few pips from this pair then this two MAs would be a good place to open sell positions, but you must place the targets close because a reverse might take place soon here. The price is oversold on the weekly chart and right now we´re close to some important long-term levels. Besides that, the SNB (Swiss National Bank) is always active in the forex market as they strongly highlighted this week, so we might see 1.09 and 1.10 soon once the sentiment reverses. Until then, we´re in limbo. 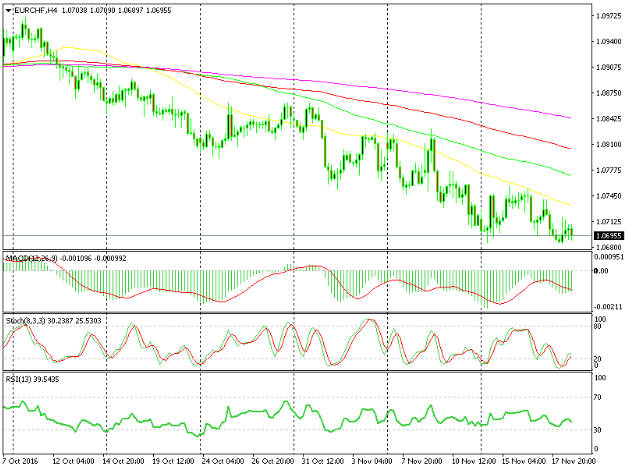 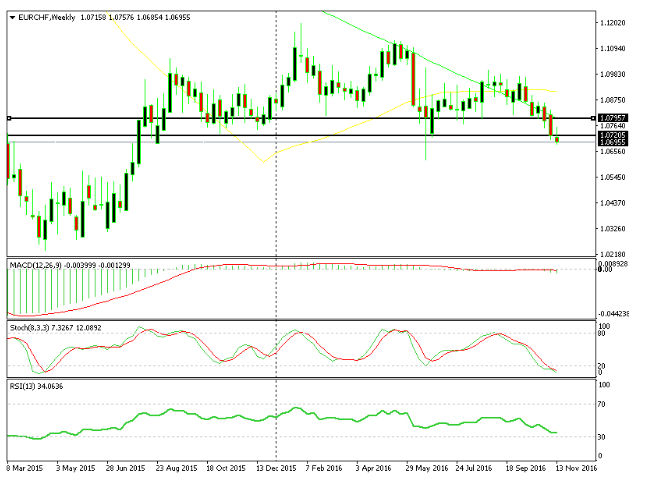 Will the reverse happen anytime soon or we´ll we witness a ‘head and shoulders’ pattern play out?

We made it through another week of trading politics. It was a very profitable week for us and the second in the row with such results, so the drawdown we had in the first week is a distant memory since we´re sitting in a 300 pip profit so far.

I expect the market to behave in the same way next week, although we must be extra careful. The USD uptrend has stretched some major forex pairs to limits if we take into consideration the short period of time it all happened. So, regardless of the positive sentiment towards the Buck, some technical traders may take profit and square positions, which would trigger a violent pullback before the next leg lower. Just be careful and trade safe guys.