We have covered the support and resistance levels in three forex pairs this week, if you remember, but we have forgotten GBP/USD. The British Pound has been battered since the Brexit referendum, losing more than 30 cents against most major currencies at some point. But since the UK High Court ruled against the UK government triggering the Article 50, the GBP has enjoyed a period of positivity.

The market sentiment has shifted for the near term so while the rest of the major forex pairs were declining in favour of the USD, the GBP has been showing resilience. It has moved to mid-20s from the low 20s in the last few weeks, which has brought some old levels back into play. So let's have a quick look at them. 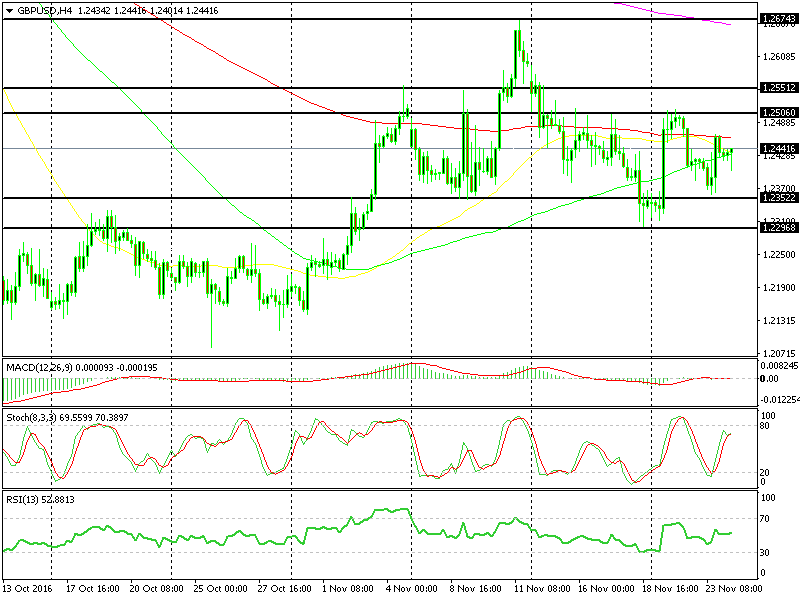 The GBP/USD support and resistance levels are pretty visible, aren´t they?

Looking at the top side, we can see the 100 SMA in red on the H4 forex chart standing at 1.2460, which makes this level the first resistance. Moving higher, this week´s high at 1.25 (+/- 10 pips) provided solid resistance during the second part of last week so that´s the second resistance level, followed by higher up 1.2550 where the second black line stands and then 1.2670.

So, these are the closest support and resistance levels for GBP/USD, guys. I´ll be looking at them today to define risk if I decide to trade this forex pair. But, with the US on bank holiday today, the closest levels are the ones I´m looking at.

Check out our free forex signals
Follow the top economic events on FX Leaders economic calendar
Trade better, discover more Forex Trading Strategies
Related Articles
AUD/USD Facing A Big Test at the 20 Weekly SMA
AUD/USD has been bullish since early October although buyers are having trouble pushing the price above the 200 weekly SMA
2 days ago