Are You Itching to Buy USD/JPY? - Forex News by FX Leaders

Are You Itching to Buy USD/JPY?

USD/JPY has been a savage beast in the past week or so. It has surged nearly 14 cents since it touched the bottom after the US elections. Now, that's a huge move considering that the market sentiment in this forex pair has been so bearish the entire year. So such a reverse takes twice the market effort and it feels twice as big.

But today, it started a long due retrace in the early hours of morning and at some point, this retrace stretched for about 140 pips. In normal times, a 140 pip retrace after an uptrend is more than enough to lure the USD/JPY buyers in, but not after a 14 cent move.

The move has been so quick and so huge that this can barely be considered retrace. Of course, there are always plenty of trading opportunities where you can grab some pips here and there and we might as well use the scalping strategy for short term signals; the price already moved 50 pips higher from the low today, but these are short term trading opportunities.

But, if you´re looking for the mother trade then this retrace might not be exactly what you´ve been waiting for. Or, maybe it is. The retraces have been so shallow since this uptrend started, so this might as well be the end of the retrace and the beginning of the next leg higher, probably until 115. 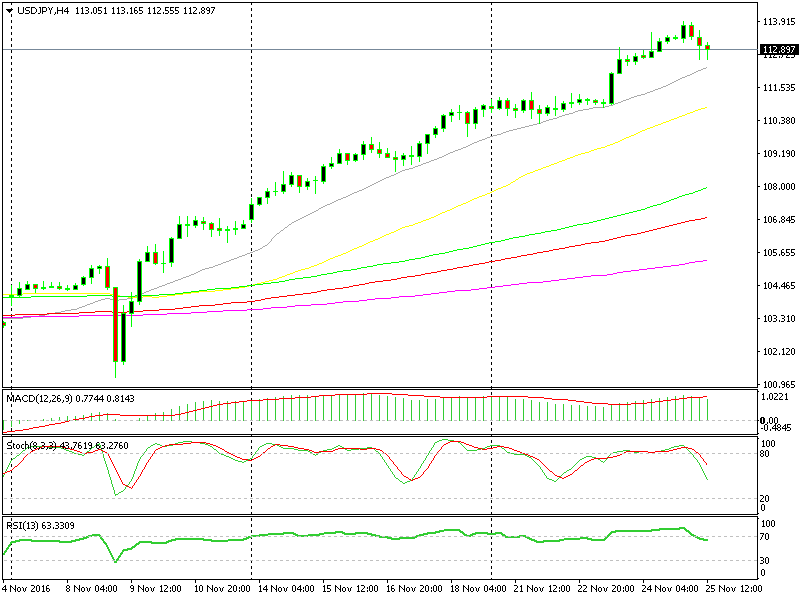 I will wait at least until we reach the 20 SMA before pulling the trigger.

That said, looking at the H4 USD/JPY, chart we can see that none of the technical indicators is oversold. The price retraced to the 20 simple moving average (20 SMA) in gray on the H4 forex chart many times in the past two weeks and now we´re still about 70 pips away from that SMA. So even on the main chart window, this retrace doesn´t seem to be over yet.

As I said, this might as well be the end of the retrace considering that it is the biggest one in the last three weeks, so it wouldn´t be wrong trying to get in with a long term buy signal/trade. However, the risk-reward ratio doesn´t suit my trading psychology.

The first decent entry point would be around the 20 SMA; after all, that is the first technical indicator nearby and that has worked perfectly during this time, so why risk and open a buy USD/JPY trade? I know it takes some nerves to sit on your hands while you´re itching to buy this forex pair, but impatience and trading forex don´t very well together.

The perfect entry point for a long term buy trade/signal would be 110 for me, or 111 depending on the time the price takes to get there. By that time the technical indicators will have reached oversold levels in the H4 or even in the daily chart, but trading is very personal, so if you can afford the risk, you might as well enter in right now. Myself, I´ll wait until the price comes to me. I don´t like chasing the trades.