The Oil Deal Is Falling Apart

Yep, that´s right. The oil producing countries are failing again to reach a consensus. OMG, I´m shocked… not really. I mean, look at the countries: Saudi Arabia, Iran, Venezuela, Russia, and Iraq. How can you expect these countries to agree on something as important to them as oil production, when they can´t even agree on simple things?

Most of the big oil producers are totalitarian or semi-totalitarian and they hate each other's guts. There´s not a particular reason for that, just dictatorships being themselves.

The OPEC meeting started with great hopes last week and a deal seemed so close before that. However, once you put a bunch of lunatics together, everything starts falling to pieces, doesn't it?

First, the immediate deal that the market was expecting … didn´t happen. So, the meeting was extended and it will continue into this week as well. The trip of Venezuelan officials to Iran last weekend was the first clue that something was not right. We now know that Iran and Iraq weren´t happy with the proposals.

Then, Saudi Arabia refused to meet non-OPEC producers and another battle of words started between the two arch rivals, the Saudis and Iran. They love getting on each other's nerves each time they get a chance. 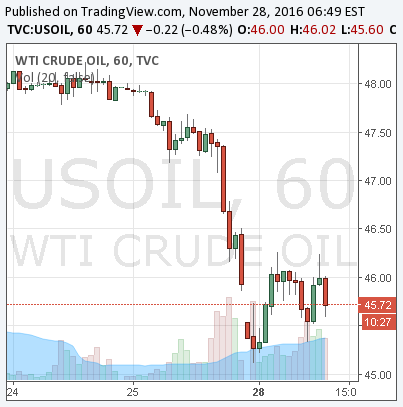 Now Azerbaijan has refused to attend the OPEC meeting too, which will take place on Wednesday. Just a while ago, the Saudis promised to cut production by 4.5% if the Ayatollah regime freezes output at 3.8 million barrels/day. Iran has made it clear that it wants to reach 4 million barrels, so that's another obstacle.

The financial markets are still pricing a 60% chance of a deal being struck this week, but that´s a long way away from the 100% we saw at the beginning of last week.

The Saudis seem to have accepted the harsh truth as they commented last night that even if production stays around these levels, the global demand will push prices higher, as it picks up in 2017. That´s more like wishful thinking, because the US producers are already increasing the output, which will balance the higher demand, if there is any.

Well, this is the world of oil.  There´s a lot more to this story, but can anyone remember all the details of this melodrama?