Brexit Negotiations Are Set to Take the Rough Path

I don´t know if you noticed it, but yesterday one of the Tory MP aides revealed the UK government plans for the EU/UK negotiations. We forgot to cover it yesterday, but it was funny as hell. Basically, the Daily Mail had snapped a photo of Mark Field´s chief of staff carrying notes from the meeting with the Brexit minister David Davis at 9 Downing Street.

She was apparently carrying the minutes openly with no cover on the notebook. The Daily Mail rotated and zoomed the picture and voila! We had the British government plans for the Brexit talks right in front of us. Too bad the aide might lose her job. Poor girl. 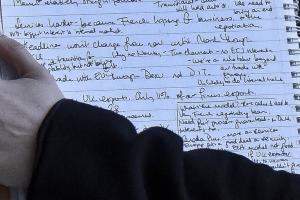 The notes show that the UK is not going for the single market. The single market access obviously comes with the freedom of movement between the European countries and according to the UK government, this is in conflict with the vote of the British people to curb immigration, as one of the main promises to vote Brexit.

According to the notes, the UK will leave the jurisdiction of the European Justice Court, so it´s full Brexit. The UK prime minister, May, dismissed the notes, but I bet the Brexit opposition will be all worked up. They make a good point when they say that when people voted for Brexit, they didn´t vote to take the harshest path possible so the UK can isolate itself.

The UK Brexit minister also recognizes that the financial services negotiations will be the hardest and the French are likely to be the most difficult as they want a piece of flesh from the UK money machine, the financial sector. However, the funniest and most childish thing was the part where the people in charge of the Brexit process in the UK expressed their goal, which goes like this: “Have cake and eat it”. For those who don´t understand this expression, it means that the UK is going for full benefits from the EU while giving nothing back, or in a more simplified way, take as much as they can and leave scorched earth behind. Screw the Europeans; that´s what it actually means.

Well, this explains the irrational steps the UK government and most of the politicians have taken in the recent month. It looks like the UK is being run by a bunch of children. I´ve noticed that most of the current UK politicians lack common sense or basic intellect, but they are even worse and this document shows that. I´m glad not to live in the UK anymore, at least until this bunch of morons are done, but I´m afraid by the time they are done with the country, it will be too late.

This morning the UK finance minister said that “the best way to protect the UK economy is to argue for the best trading deal”. But this is not a one player game. Merkel made it clear a few minutes ago that negotiations will take place with the 27 member states together, while EU's Dijsselbloem said this morning that under no circumstances will the EU accept that London remains the financial center of Europe once it leaves the EU, which is only reasonable.

So, the UK is playing tough (and stupid) while the EU is left with no choice. The softer nut will crack but the question is, which one will be first and above all, who on earth would open up new battle fronts?

Markets Flat After Flurry Of Biden Executive Orders
5 days ago