The headline sounds like someone who has just paid their monthly mortgage/loan installment. I know I hated it when I was paying back the loan I took from the Cooperative Bank about 15 years ago.

However, the curse was aimed at the increasing number of UK mortgages this time. The UK mortgage approvals jumped 3.6k higher in October, the UK net lending increased by 0.2 billion from the previous month, and the M4 money supply was 1.1% higher last month, which reverses the decline in the previous month.

Just for some take home knowledge, the M4 money supply includes all the cash that is circulating in the domestic economy in the form of GBP banknotes and coins, as well as the short term bank deposits which are almost as good as cash.

An increased money supply means increased spending; the more cash people have in their pockets, the more likely they are to spend it. This encourages firms to increase their investments, which helps the economy and subsequently brings higher inflation. That´s how you find it in the textbooks, but it´s never as straightforward as 1, 2, 3, particularly in the case of the UK when Brexit is just knocking on the door. 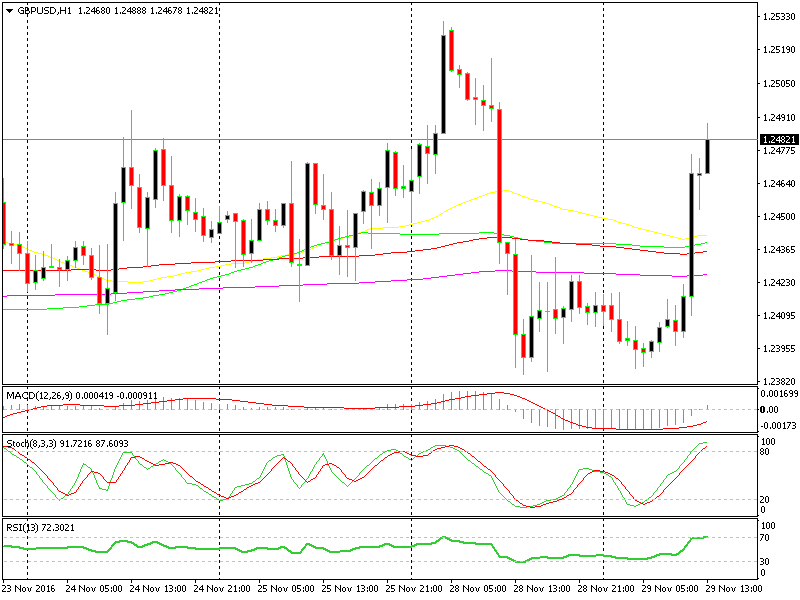 Yet, the GBP pairs jumped about 50-60 pips higher after the release. This is so strange because this sort of economic data barely moves the forex market a few pips at best of times. It shows you how agitated the GBP market is right now. The twists and turns we have witnessed so far in the Brexit process have left the market wondering what will come next, so the forex traders are trying to make something out of nothing in order to try and figure out the next move.

We opened a GBP/USD sell signal before the UK lending report was released when the price was just below the 200 smooth moving average on the hourly forex chart, thinking that this piece of data would have no impact on GBP pairs, as always. But what happened happened and that forex signal got smoked. Well, it´s a tough game where you must watch out for obstacles coming from all angles, even reports that have never moved the market a single pip.