Another Day, Another Sign the Eurozone Economy Is Headed in the Right Direction - Forex News by FX Leaders

Another Day, Another Sign the Eurozone Economy Is Headed in the Right Direction

The Eurozone economy has been in doldrums since the 2008 global financial crisis. It´s been so long that we have gotten used to it, but recently the situation has been improving considerably, so we´re getting used to seeing positive economic data from the EU now.

This morning´s numbers from the Eurozone are another proof that the ECB monetary policy is working. Today is the day the EU manufacturing data for November gets published, which already happened, and we can say that although it is not great, it is pretty good considering the recent history.

The German and the whole EU manufacturing production remained steady in October, although the EU 27 manufacturing chart below shows that the trend is pretty strong, despite a month of steady growth. What´s to highlight in the EU 27 numbers is the new orders which jumped to 54.4 PMI. That´s the highest in about three years, so the future seems pretty bright. Don´t forget that a jump in new orders means higher production in the coming months. 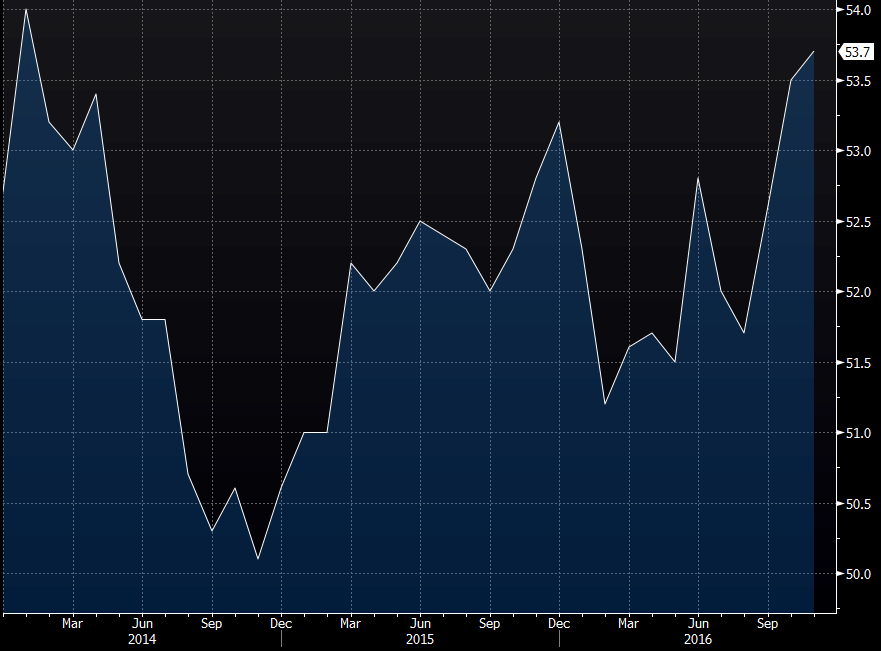 The uptrend in EU manufacturing has been steep this year

The other major EU states (France, Italy, and Spain) also beat the expectations, with Spain leading the way.  Surprising, right? Spain is well known for tourism, beaches, and agriculture to the ordinary Joe, but it also has a considerable manufacturing sector. Zara is the largest clothes production and retailer in the world and it is a Spanish company, so don´t underestimate the fashion and food sector (production) in Europe.

Another positive sign is the 0.2% decline in the EU unemployment rate. It fell from 10% to 9.8%, which is still high, but at least it is moving in the right direction. The Euro is better off so far today but it is still feeling weak. I heard some rumours yesterday that the ECB will extend its QE programme and add to it.

I don´t know how real these rumours are, but if that´s the case, then this would be a massive bearish event for the Euro and the Euro pairs since the market is expecting some sort of monetary policy tightening from the ECB sometime soon.

Check out our free forex signals
Follow the top economic events on FX Leaders economic calendar
Trade better, discover more Forex Trading Strategies
Related Articles
GBP/USD Buyers Retest the 50 Weekly SMA Ahead of Tomorrow's CPI Report
GBP/USD was rejected by the 50 SMA early in December, but is quickly back at it as the USD resumes decline on softer FED rhetoric
3 weeks ago