The SNB Comes to Our Rescue Again – EUR/CHF

We have been in a EUR/CHF trade for about three weeks now. We opened a long term buy forex signal in this pair when the EUR/CHF sellers were attacking the 1.07 support level with full force. The sellers made many attempts to break that level and they managed to pierce it several times, but that can´t be considered a proper break.

They tried and tried for three weeks but they failed time after time. In fact, the price did close below that level in the H4 forex chart and on the daily EUR/CHF chart as well, but the failure to continue further below invalidates the breaks. According to forex textbooks, the price needs to stay below a support level in order to be considered as a proper break.

The SNB fought back, as we mentioned a couple of weeks ago, and it now looks like the EUR/CHF bears have given up. The trading range started to move higher earlier this week. At first, this forex pair was trading between 1.0700 and 1.20, then the range shifted higher to 1.0720-50 on Monday and 1.0740-70 on Tuesday. 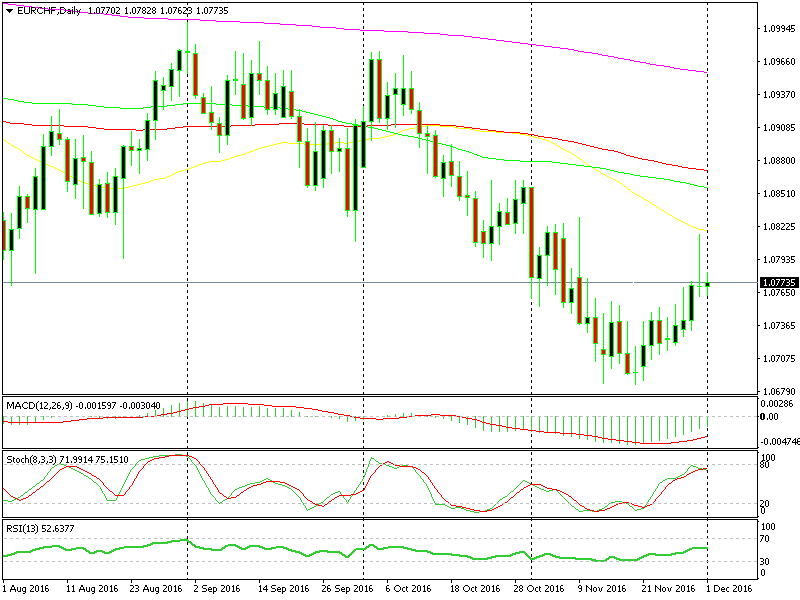 A bunch of moving averages are clustered on the top side.

The break finally came on Wednesday morning, but it didn´t happen to the downside as some forex traders were hoping. The break was on the top side, which went in favour of our EUR/CHF signal. Not to brag about it, but I think that we made a really good move with this forex signal. It´s true you can never trade forex 100% risk free, but the 1.07 level was the line in the sand for the SNB (Swiss National Bank).

That is a level where the SNB doesn´t feel comfortable when the price gets close to it. Besides that, the technical analysis painted a very bullish picture since all indicators were oversold in most timeframe charts. Now the price is nearly 100 pips higher and our signal is well in profit, so we can say that we are starting December on the right foot.

There are obstacles to the top side, surely. The 50 moving average (50 SMA), the 100 SMA, and 200 MA on the daily chart are still to be overcome, but one step at a time. After all, this is not the fastest moving pair among forex majors.