Inflation Moving Up Nicely in Europe, But Euro Shorts Beware

Here comes another positive number from the Eurozone, the producer inflation or producer price index (PPI), as it is formally known. It was expected to grow by 0.4% in October but it surged 0.8% higher. That's twice the expectations, so it's a pretty good number.

However, what's more promising is the trend for this year. As the EU PPI chart below shows, the uptrend this year has been steep despite a few hiccups. You might argue that better PPI numbers this year have been due to higher oil processes and that's true to some extent, particularly in the first half of the year. But, since then, the oil prices have remained steady, trading in a range between $40 and $50 per barrel. 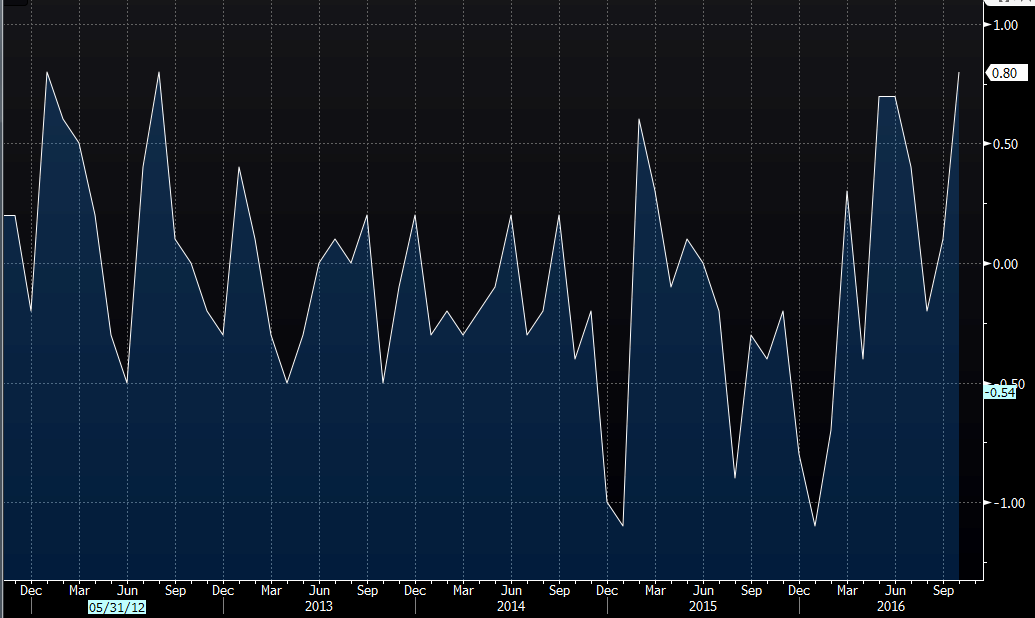 This year´s EU PPI uptrend has been quite steep

So, it's a bit more than that. The global investor sentiment and inflation expectations have improved and that's been helping the domestic EU economy, thus sending inflation higher. If October's better Eurozone PPI report will translate into higher consumer inflation (CPI) in November and December, it remains to be seen as good report, nonetheless.

This might not be a market moving report as you can see from the EUR/USD chart, but it is another card for the ECB (European Central Bank) when the time comes for them to take the big step and announce the end of the QE programme, which by all chances will be extended further in December.

By the way, Reuters released a poll a couple of hours ago where the vast part of the 70 economists surveyed thought that the ECB will extend their QE programme by at least another six months when the current one expires in March. So, as I said in one of our market updates last week, be weary of Euro shorts as all these positive data pieces accumulate. At some point, they will reverse the sentiment in favour of the Euro and I'm more than certain that this (the big reverse) will happen before the ECB decides to close the tap.