Still Hangover from the ECB … And A Trade Idea

The three biggest risk events in forex for December were/are the Italian referendum, the ECB meeting and the FED meeting. The Italian referendum took place last weekend and yesterday the ECB (European Central Bank) held their meeting which was long awaited by the market.

More or less, the entire forex market was expecting the ECB to continue their monetary easing programme so the risk here was that they end or drastically reduce the QE (quantitative easing) purchases. But, they promised to run QE at 60 billion Euros/month starting from April which is sort of dovish. There were also other dovish comments from Draghi so the Euro lost about three cents yesterday top to bottom.

So, it was a bad day for the Euro, which turned out to be a great day for the Buck. Very often recently we have seen that a bad event for the Euro turns to be good for the US Dollar and vice versa. Until one or two years ago a bad even for the Euro meant only that the Euro was going to lose its head, it didn´t have any meaningful impact on the Buck.

The same is happening with USD/JPY as well, which we´ll analyse shortly. I guess the forex market is totally divided between the USD and the rest of the major currencies. So, when a negative event happens for a major currency, the market leans totally on the USD side, which turns into a broad USD buying and vice versa.

So that´s what happened yesterday, it was supposed to be a negative day only for the Euro, but instead the USD gained considerably in all major forex pairs. This morning the market still seems hangover from yesterday and most pairs don´t know what to do. 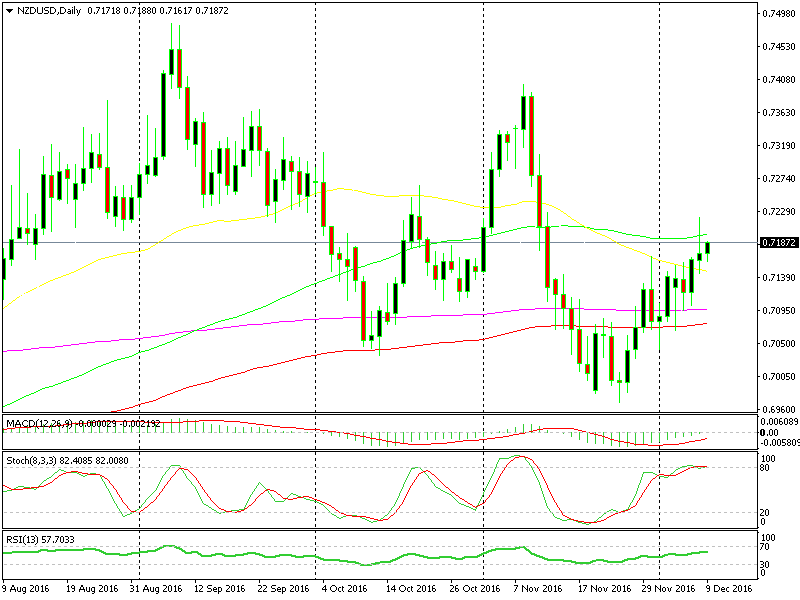 That said, the commodity Dollars are trying to put up a fight with AUD/USD about 60 pips from yesterday's lows. But, the NZD is lagging its commodity cousins which is a sign of weakness in my opinion. So, I´m getting ready to open a sell forex signal in NZD/USD.

Right now we are around 0.7180 and the 100 simple moving average (100 SMA) is just standing above at 0.72. That´s a decent level so I might be persuaded to open the NZD/USD signal right there. Alternatively, if the market decides to push a bit higher, yesterday´s high at 0.7220 will be the perfect place to short this forex pair.

Skerdian Meta // Lead Analyst
Skerdian Meta Lead Analyst. Skerdian is a professional Forex trader and a market analyst. He has been actively engaged in market analysis for the past 11 years. Before becoming our head analyst, Skerdian served as a trader and market analyst in Saxo Bank's local branch, Aksioner. Skerdian specialized in experimenting with developing models and hands-on trading. Skerdian has a masters degree in finance and investment.
Related Articles
Weekly Outlook, Jan 25 - 29, 2021: Top Economic Events to Watch This Week
The broad-based U.S. dollar is going to end this week on the bearish track as traders continue to cheer the Joe Biden administration's inaug
20 hours ago