Today has been a good day so far for the forex major currencies. The Chinese economic data this morning came out slightly better than expected, which is positive for the commodity currencies. Why is that, you might ask. That´s because China is the biggest importer of raw materials and commodities and when the industrial sector in China picks up, so does the demand for raw materials, which increases demand for the commodity Dollars.

That´s how you do the connection between the real economy and forex. However, we know that the forex market always tries to anticipate the next step, so the moves in forex take place right after the economic data is released and way before the Chinese producers ask the Australian exporters for supplies.

The UK inflation report was also quite positive for the Pound, but obviously the reaction in GBP pairs was minimal because… Brexit. A little while ago, we had another two forex events. Although they might not be a market mover at this moment since the FED meeting is happening tomorrow, they are positive signals for the long term.

ECB´s Hanson said about an hour ago that “the ECB cannot extend the purchase universe indefinitely”. The ECB is not going to stop the QE programme tomorrow, but it´s nice to know that they are thinking about it and they will have to taper it at some time. 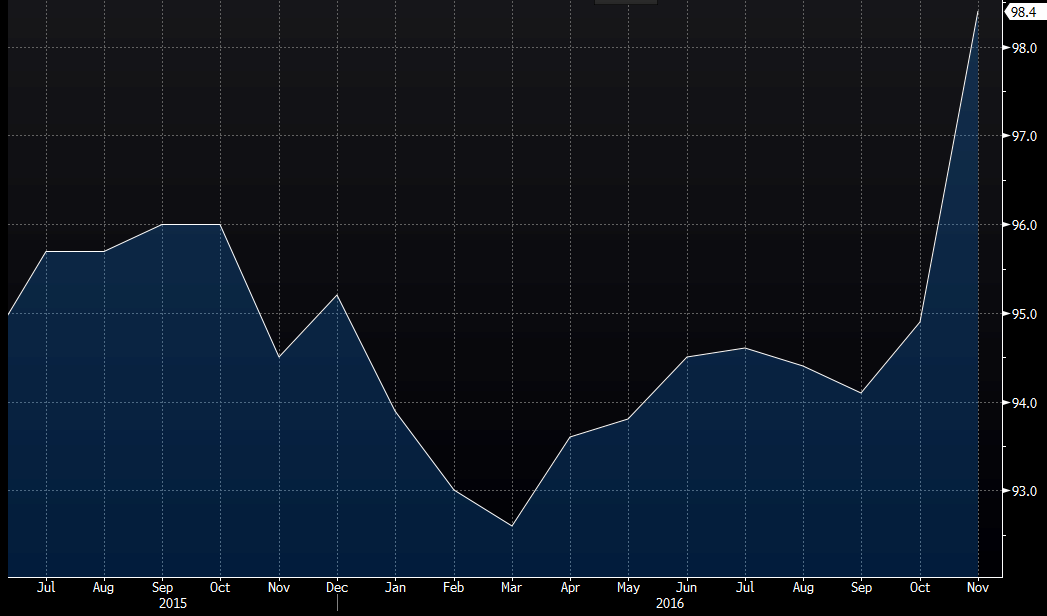 You can´t argue with the trend of the recent months

On the other side of the pond, small businesses in the US are finally seeing some sunlight as the small business optimism jumps from 96.7 to 98.4 points. Looking at this economic data chart, you can easily spot the pickup in the recent 2-3 months. I guess the US economy will be in a great shape when it is handed over to Trump in about a month´s time.

As I said, today´s economic figures might not move the market much, but they are another brick in the long term market sentiment. So, in order to figure out future moves, we better put all the pieces together right now before the market sentiment changes, which will be too late for a trade.