Ok, the FED came, did what they had to do, and left. They hiked the interest rates in what was the most anticipated rate hike in central bank history. Still, the USD made some considerable gains, so it feels like the forex market sentiment was already leaning towards the Buck. But forex traders were only waiting for the FED to be out of their way. That led to the break of some important support and resistance levels in most major forex pairs which we will look into now.

Support Levels – This forex pair lost about 200 pips last evening, breaking the 1.0500-20 support level, but the ultimate level at 1.0460 still remains as the last line of defense for Euro bulls, which was the low last year. Beyond that, we can´t see any other low, so in order to find more support levels, we had to switch to the monthly forex chart and zoom it out as much as possible. 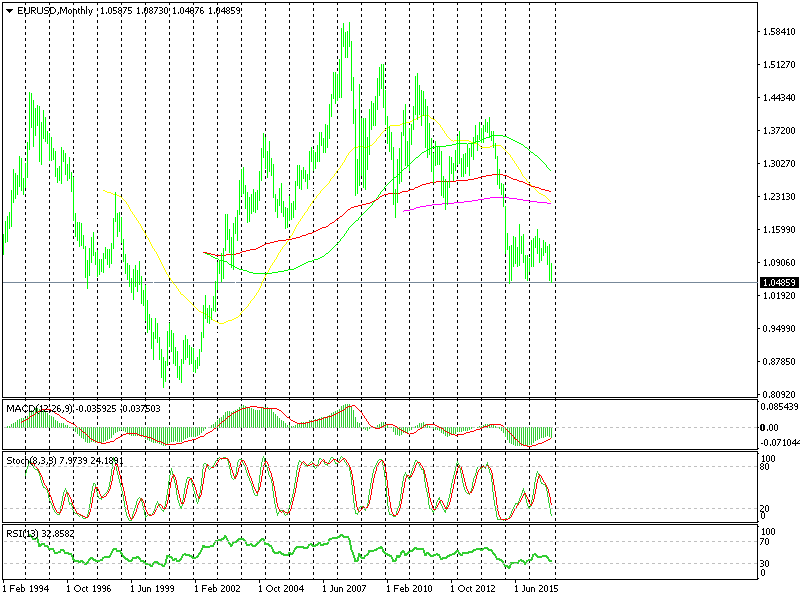 Who else is going for parity?

From that squeezed out chart, we can see that the closest semi-decent support level comes at 1.0345, which acted as support back in 1997. The lowest point in 1999 was 1.01, so that´s the other support level before the massive parity level. Many were calling for parity about two years ago, but maybe the stars only lined up now for that. So let´s see what the coming weeks will bring.

Resistance Levels – 1.05 is the closest resistance level now that we´re below it, but the price has moved above and below it several times this morning which reduces its importance. The 1.0520 and 1.0540-50 have turned into more solid resistance levels now, so that's what I´m looking at.

Above there comes this week´s resistance band which stretches from 1.0620 to 1.0660. The price hasn't been able to climb above there since the ECB president, Draghi, slapped it down. So, that is the level I am looking at for a long term sell forex signal in case we get a pullback anytime soon.

EUR/USD Makes a Break Above MAs, After US Q2 GDP Misses Expectations
20 hours ago

Caution Advised for Crypto Buyers, As Bitcoin Hesitates Around the $40,000 Resistance for the Third Day
21 hours ago