The UK public sector net borrowing (PSNB) is not the most important economic data when it comes to the GBP. But, it was negative and it is yet another small piece which points down in the near term.

Basically, the public sector borrowed about 1 billion Pounds more than expected, bringing the total to above 12 billion and the overall debt to 1.655 trillion Pounds or nearly 85% of the country´s GDP. That´s the highest UK debt/GDP ratio ever. In October, the UK government received a bonus from VAT and corporate taxes, probably coming from the higher Q3 profits and sales due to the weaker Pound. 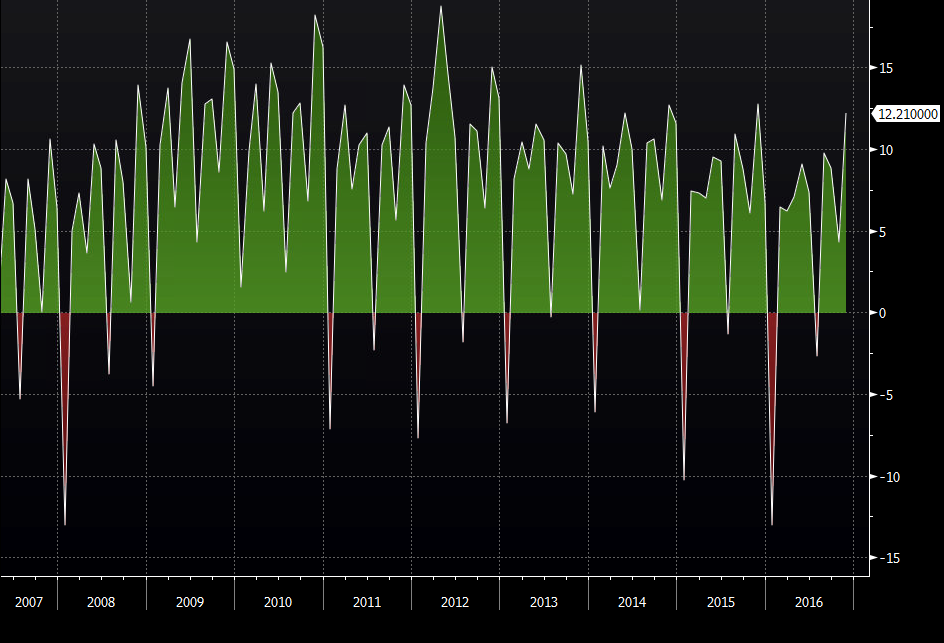 There´s no trend in this chart right now

We saw the jump in the UK retail sales last month, which obviously means higher VAT taxes. That´s how I make the connection between the different sectors of an economy and the local currency. The BOE (Bank of England) survey also showed that weak GBP increased tourist spending, thus consumer demand, which explains the higher income in VAT and crop. taxes in October.

However, that was in October. Today´s UK PSNB data shows that debt is increasing. That´s not good with Brexit coming up. If the UK finds itself in economic trouble in a year or two, then the government will be forced to borrow more which means more debt. The UK probably will turn into a new Greece; one of the main reasons the UK voted to leave the EU.

Jokes aside, the UK PSNB chart seems normal, but it will only take a month to have the alarm bells ringing. As you can see there, usually once a year the chart is red, which means that the government is lending instead of borrowing. We haven´t seen that in nearly a year, so if this continues for a couple of months, then the pattern will be invalid. That would obviously be bad for the BGP as it adds another fear factor to this whole Brexit hullabaloo.

Forex & Commodities Trading Levels to Watch on Monday
1 hour ago
Weekly Outlook, Apr 12-16, 2021: Top Economic Events to Watch This Week
The broad-based U.S. dollar is going to end this week on the bullish track even as downbeat U.S. jobs figures and a stubbornly dovish U.S...
2 days ago