The US home sales data for November was released a while ago and judging from the reaction in major forex pairs, I can say that the signals I´m getting are mixed. The number was expected at 5.52 million but the actual annualized number for November was 5.61 million houses sold.

That´s a good number, especially since it is over 5.5 million, but the Euro and the Pound don´t think so. EUR/USD keeps banging the head against the 1.0450 level while GBP/USD is trying its luck at the 1.2380-24 area. Talking about EUR/USD, the 1.0450-60 level was a major support level during the decline and it has held the price above for nearly two years.

Now it´s supposed to turn into resistance so we might grab a few pips here. Anyone up for it? I just realized that this was the big level but the price has slipped about 20 pips in the last 10-15 minutes while I was writing this update, so the risk/reward ratio doesn´t suit my appetite. 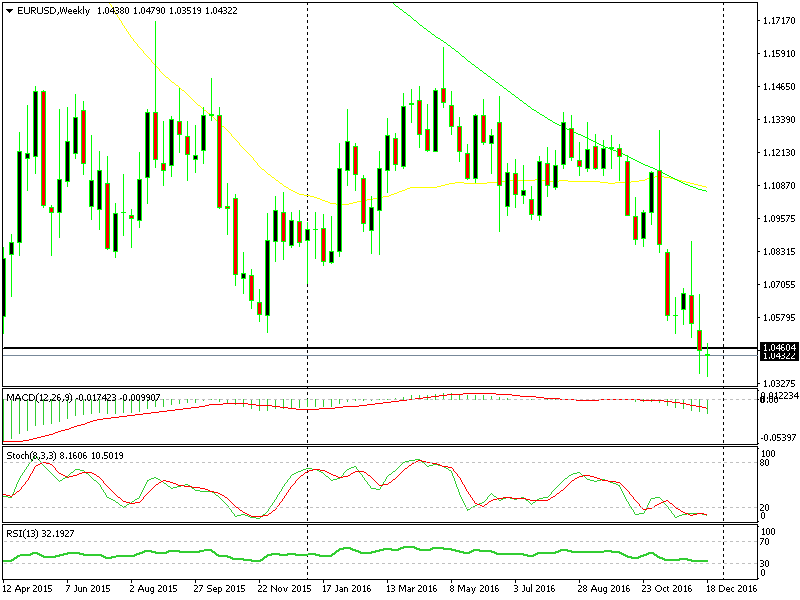 This EUR/USD weekly chart is the clearest one I have seen in a long time.

If the price moves up there soon then I might open a sell forex signal, but first I have to see how the price is reacting there again. Besides that, a quick move up there would mean that EUR/USD buyers haven´t had enough so they are on for more risk, which might even take this pair to 1.05 or even 1,0520. So as you can see, forex dilemmas are always present but that´s a trade idea for whoever might be up for it.

The Buck has been doing much better against the rest of the pack, particularly against the Yen and the CAD. The US crude oil inventories must have played a role in this 50 pip USD/CAD pop. By the way, our EUR/CHF signal is still hanging around the 1.07 level, but that seems miles away from the 1.0680 support level which we trust with our lives at the moment. So, SNB 1, the forex market 0 in this everlasting battle.