GBP Jumps on UK GDP… But There’s More Beneath

The UK GDP report is the most important economic data release today. Yesterday the final US Q3 GDP was revised 3 points higher, so perhaps the UK Q3 GDP would shift higher too given the improved economic conditions in most of the globe.

The UK data was published a while ago and from the first glance, it looks pretty good. The UK current account, which is the difference between import and exports (goods, services, labour and other cash flows) and GDP numbers, came out better than the market was expecting. The current account deficit for Q3 was about 3 billion Pounds smaller while the GDP ticked up one point.

This looks all great, but if we dig deeper into the GDP report, then things are not all rosy. The previous two quarters were both revised down a point each, which means that even with the higher Q3 GDP, the overall UK economy is a point worse than previously thought. The yearly GDP number, which came at 2.2% against 2.3% expected, clearly shows that.

But, that's not all. The UK exports fell by 2.6% even with the weak Pound, the business investments were lower than in the previous quarter, and household income declined by 0.6%. That's the biggest fall since 2013. Now that's the most important detail in this report according to me. 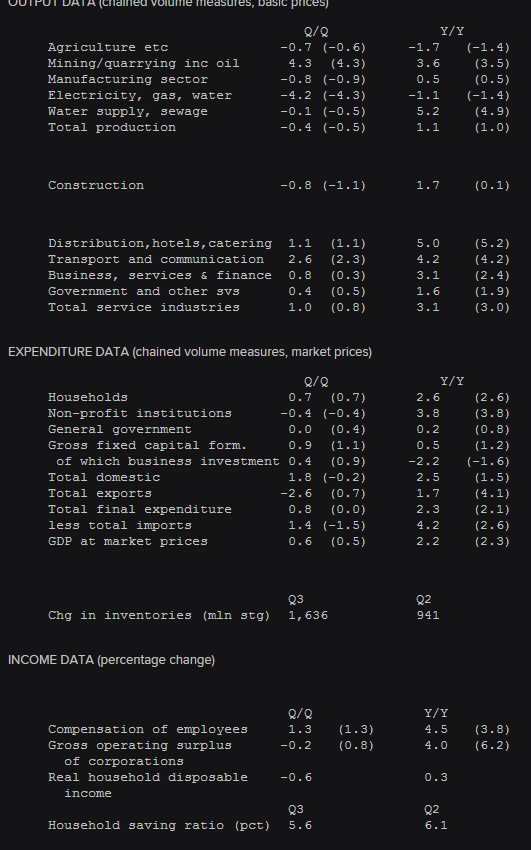 The exports are suffering and the GBP is not expected to fall much further in order to help them, so the only lifeline to the UK economy has long been the domestic consumption and it will continue so for quite some time. However, if the household income decelerates like this, then there's trouble ahead for the island nation.

The GBP traders (whoever is still hanging around) got excited at first when the headline number appeared green in forex calendars and GBP/USD jumped about 40 pips higher. But once the GDP report was digested by the market analysts, the GBP buyers took profit and closed their trades. That has sent the GBP back down and we're heading towards the 1.2090-21 support level.

We mentioned in our previous update that the 20 simple moving average (20 SMA) on the H1 forex chart has been providing resistance this morning and it did so again. The price reversed immediately after touching it, following the release of the GDP report. We were not able to open a forex signal up there but that was a good trade idea, if you could catch that move.

USD/JPY Bearish As the USD Retreats Lower
1 hour ago