We all know what happened last night; a short squeeze took place in EUR/USD which soon turned into a broad USD selloff. The Buck lost many pips against most major currency pairs, but the EUR/USD surge stood out among others.

This sort of price action brings to attention a very important issue for forex traders. Is this just a retrace after a massive 10 cent downtrend since the US elections or is this a reverse?

Considering this pullback, a retrace makes sense. It´s long overdue; it's not substantial enough to be seen as a reverse and the low liquidity due to the time of day and year has magnified the move. It looks similar to the GBP flash crash which took place during nighttime when liquidity was scarce. 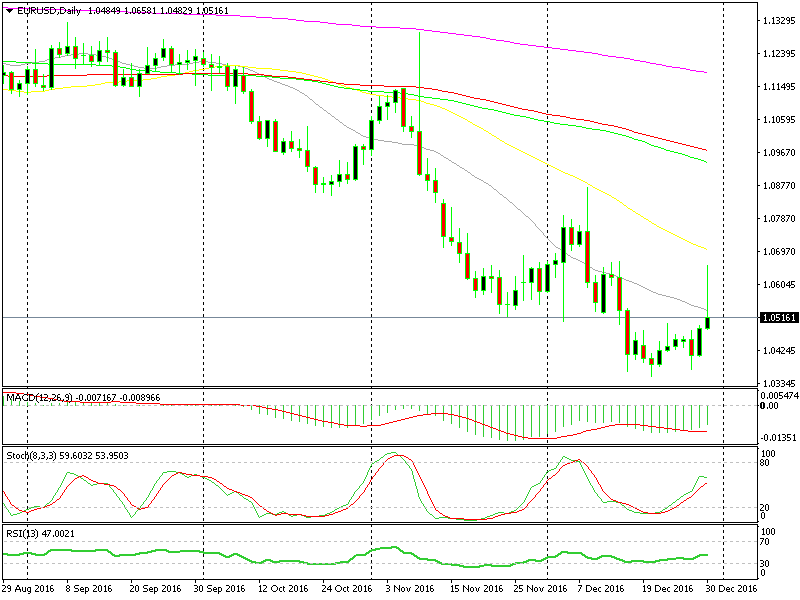 Pick your moving average as an entry point to sell

On the other hand, that's how reverses happen. As you can see on the daily EUR/USD chart above, the sellers had three attempts at the 1.0350-70 support level but they failed to break below it. After the third break on Wednesday, this forex pair rallied for about 150 pips during the first lap, which was followed by a second 150 pip lap.

Have EUR/USD sellers given up? Are they quickly closing their long term sell positions?

The US economy is in a much better place than the Eurozone economy right now, so the fundamental picture doesn't look right for the buyers. But often, the market sentiment and human fear are stronger than logic. Do you remember a few years ago when EUR/USD was near 1.40 at the height of the EU sovereign debt crisis which followed the 2008 GFC?

Sometimes the forex market doesn't care for fundamentals. The problem here is that although this 300 pip move might have come as a result of thin liquidity, the forex traders might see this as the beginning of a long term trend reverse when they come back from holidays on Monday. 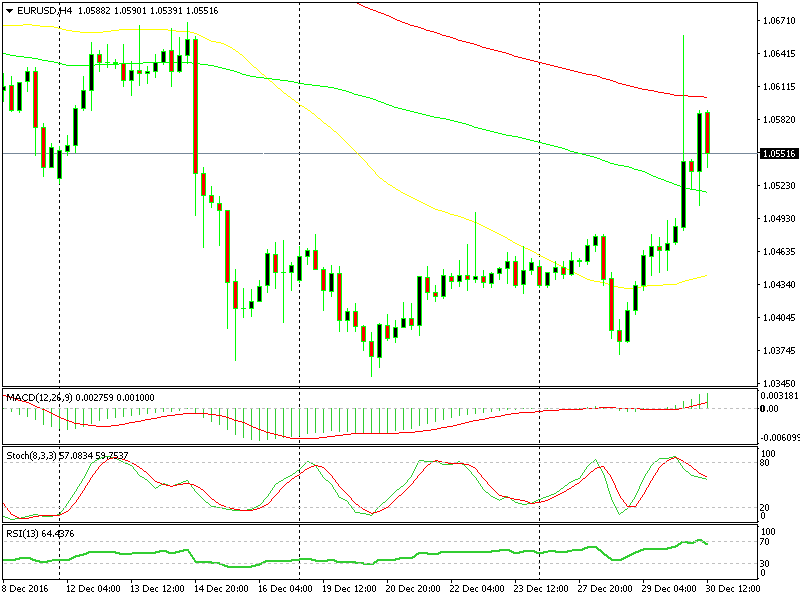 Is this a reverse or a good opportunity to sell?

This will lead to more short covering (closing short positions) and more buy orders. This would be the real reverse. But we´ll have to wait and see how the market takes this recent surge. If the market sees it as the beginning of a reverse, then 1.08 and 1.10, here we come.

If it sees this as an overdue retrace, then this will be a good opportunity to open a long term sell forex signal. In that scenario, 1.07 would be a great place to short EUR/USD. The stochastic indicator on the daily (1st) chart will become overbought by that time, which would give us some better odds if we decide to sell.

Skerdian Meta // Lead Analyst
Skerdian Meta Lead Analyst. Skerdian is a professional Forex trader and a market analyst. He has been actively engaged in market analysis for the past 11 years. Before becoming our head analyst, Skerdian served as a trader and market analyst in Saxo Bank's local branch, Aksioner. Skerdian specialized in experimenting with developing models and hands-on trading. Skerdian has a masters degree in finance and investment.
Related Articles
Crude Oil Bullish Bias Continues Amid Weaker Dollar- Eyes on API Figures!
During Wednesday's Asian trading hours, the WTI crude oil succeeded in maintaining its previous session bullish rally and drew further bids
4 hours ago

US Dollar Dips as Yellen Calls For More Stimulus, Without Worry of Debt
6 hours ago
Comments